Sonos has just revealed its latest speaker, a new portable, Bluetooth-connected model called the Sonos Roam. But, if its $169 price tag didn't make that clear, this is more than just your typical bargain-basement Bluetooth speaker. In addition to the usual battery-powered wireless music experience you'd expect for the category, Sonos promises exceptional audio quality, plenty of features, and integration with the rest of the Sonos ecosystem for those already deeply invested in it.

The first big feature that separates this from the usual dime-a-dozen portable Bluetooth speakers is connectivity. This isn't just a Bluetooth speaker; it has Wi-Fi connectivity to integrate with your existing Sonos speaker system. It's also a bridge for that Bluetooth connectivity, allowing you to connect your phone right to your full speaker setup. And when you walk out the door, it seamlessly transitions from Wi-Fi to Bluetooth to pair with your phone as well, with support for Bluetooth 5. Sonos is also debuting a new Sound Swap feature: Just press and hold the play button, and music on the Roam will swap to the nearest speaker automatically. Like the Sonos Move, the Roam has Automatic Trueplay, which lets it dynamically adjust audio playback to best suit its environment, but this time around, it works on Bluetooth, not just Wi-Fi.

Sonos claims the Roam has great sound, and for $170, we hope so, though we haven't heard its performance for ourselves. Still, this pricing seems a little bit optimistic, considering you can get some pretty great Bluetooth speakers in a similar size for less, though those deep into the Sonos ecosystem may see it as a value. However, its IP 67 rating does stand it out from the pack — this can take a tumble into a creek or handle rain with no issue.

As a portable speaker, it's not too chunky, coming in at marginally under one pound. Sonos hypes the speaker's triangular shape, which lets you angle the sound upward even if you flump it onto the ground on its side and ostensibly reduces accidental button presses. At a minimum, it won't roll away from you, at least. 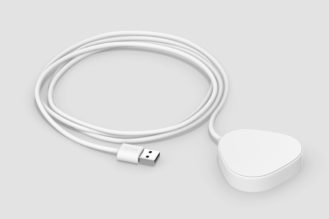 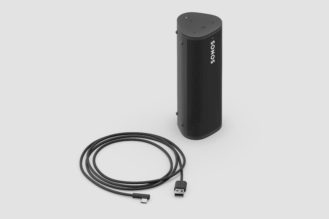 Sonos promise up to 10 hours of battery life during music playback, with up to 10 days of standby time, and the transition between the two states should be nearly instantaneous as soon as the sound stops, with wakeup taking less than a second. The Roam charges wirelessly or wired, as you prefer. Sonos has its own magnetically-attached Qi charger (available for purchase separately), but you can use your own or top-up over USB Type-C at up to 15W (5V PDO at 3A).

Alexa and the Assistant are also built-in — though, presumably, it's still the same experience other Sonos speakers offer, which isn't quite so good as the Assistant on Google's first-party speakers. It also supports Apple AirPlay 2. 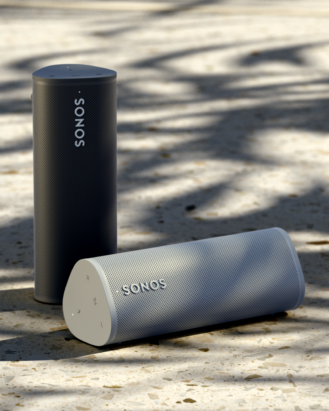 The Sonos Roam can be pre-ordered starting today for $169 in either black or white colorways, with formal availability set for April 20th.

Chromebooks have changed a lot over the last ten years