OnePlus smartwatch rumors are almost as old as OnePlus smartphones themselves, but any full-fledged smartwatch that might exist is still in the offing. The first OnePlus wearable is an inexpensive fitness band for the Indian market. The OnePlus Band is priced to compete with the bestselling Mi Band 5 in India, but some of its glaring shortcomings at the basic level keep the OnePlus Band from realizing its full potential.

It’s pretty easy to confuse the OnePlus Band for just about any cheap fitness band on the market — unless you happen to glance at the prominent OnePlus branding. There’s no capacitive button on the front as everything is run using swipe gestures on its 1.1-inch display. This tiny rectangular screen is vivid and gets plenty bright in the sun, though you have to dig into the settings to access manual brightness controls. Upon turning the capsule over, you'll find its heart-rate and SpO2 sensors, along with a 2-pin charging connector. 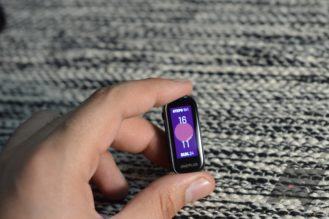 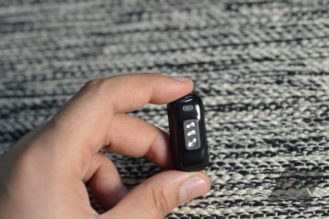 To charge the band, you must pry out the core and snap it onto a plastic charging cradle. Dislodging and returning the capsule to its strap can get a bit tricky, which is frustrating when there are much more elegant solutions in the same price range. But this shouldn’t be a dealbreaker as you’d be doing this only once every few days.

The included TPU strap is high-quality and comfortable enough to be worn all day. It didn’t irritate my skin at all — something I routinely faced with older Mi Bands — and its clasp remains secure and doesn’t unbuckle on its own even during intensive workouts. The one included in the box is mostly black, with a grey lining on the inside (more colorways are sold separately), so it should be pretty discreet even for wearing on more formal occasions. 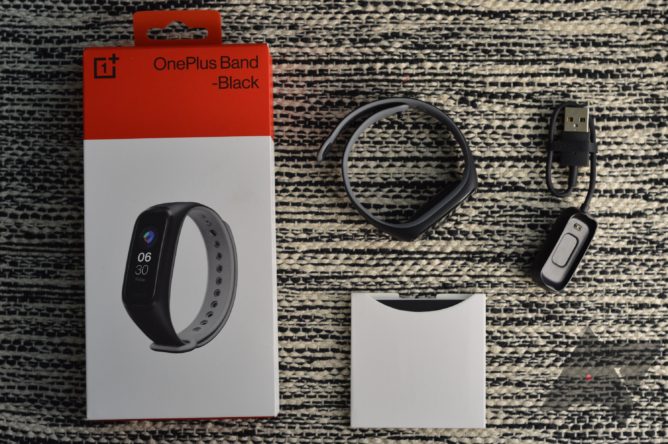 Much like the band itself, the packaging is also quite minimal. All you get is the charging cradle with a short USB-A cable and some documentation, in addition to the Band. That’s it.

The onboarding process wasn’t complicated, though you'll need to create an app profile before you can pair the band. On a OnePlus phone, the app will automatically pick your saved OnePlus account (FYI, the app and the Band are both compatible with all Android phones). Those looking to use this fitness tracker with an iPhone will be disappointed to learn that there’s no iOS app for now, though OnePlus says that is in the works.

The app is extremely barebones with only essential options available at your disposal. For instance, it doesn't motivate you enough to "close the rings" regularly or match scores with your friends, plus, there is little to no customization for the included watch faces and movement nudges — things that alternatives from Honor and Xiaomi are better at. However, the app does have some neatly organized heads that brief you on your daily activity right off the bat, and you can expand any of them to dive deeper into your data (see below).

The Fitness tab is where you log your outdoor running and walking sessions with GPS-assisted tracking. The Manage tab is where you see all the settings to customize your band with watch faces, adjust notification sync settings, manage your profile, alarms, and everything else. One thing that’s noticeably missing from the settings is third-party integrations with apps like Strava and Google Fit — the latter of which is supported by OnePlus' own sister brand Realme's fitness trackers. Another thing that caught my attention was how slow the firmware file transfers to the band were, though that's something an app update can easily fix.

But you don’t need to pull out your phone for your every interaction with the Band. OnePlus has included a good selection of features right on the band, allowing you to glance at your activity logs or even start any one of the 13 supported workouts. That also means you'll have to manually start recording your exercise sessions as the band lacks automatic workout tracking, though it can automatically pause measuring when you're resting and resume thereafter. Aside from the usual activities like cycling and running, the Band can also track pool swimming and even your gully cricket matches, which many Indians are going to like.

As for the tracking itself, sleep monitoring turned out to be sorely unreliable in my testing. The Band thought I was in a "light sleep" when I was clearly out of bed, walking around — an issue we never experienced with the Mi Band 5. And there’ve been more than a couple of instances where the band recorded awfully high awake time. I mean, I’d be the first to know when I don’t sleep for half the night. Plus, the band doesn’t track your REM cycles, which is a shame given the Honor Band has supported it for long. All you get is deep sleep, light sleep, and awake time, in addition to a score based on how well you slept. Sleep tracking is notoriously hard to get right, but the data I got from the OnePlus band is not remotely believable.

Other than that, the step count was within the acceptable error margin, and so was the heart rate, nothing special there. For outdoor activities, I found the GPS to be decent enough. The route it locked at the end was on point, and overall usage was on par with many of its rivals. When tracking other workouts, the band gives you some basic information, including how intense your exercise is, mostly based on your heart rate and other onboard sensors. 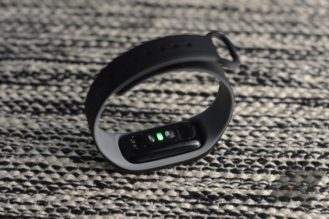 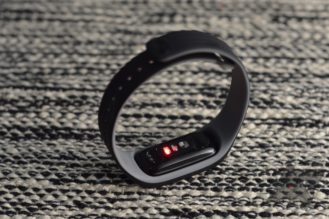 The heart rate monitor (left) and the SpO2 sensor (right) in action.

The OnePlus Band’s standout feature is SpO2 (blood oxygen) tracking, which you don’t often find on such budget offerings. The feature kicks in when you’re asleep to log your blood oxygen saturation at regular intervals. While I didn’t have a medical-grade meter handy to compare the results with, my readings were always within the suggested range. Still, this isn’t something you should rely on for anything more than keeping a casual tab on your health.

I really like the Band as a notification receiver. Phone notifications are synced without delay, and they are nicely displayed, complete with custom app icons for many popular apps. You obviously can't interact with them on such a tiny screen, but they did help me avoid touching my phone so often during the workday. I call that a win! And when you receive a call, the band lets you either mute or disconnect the call.

The OnePlus Band gets a lot of little things right, too. You can control your phone camera and media playback with the Band with ease. I also like the flick-to-wake gesture, which worked every single darn time for me without fail. However, the band lacks any female health tracking tools that many budget bands are starting to include these days. 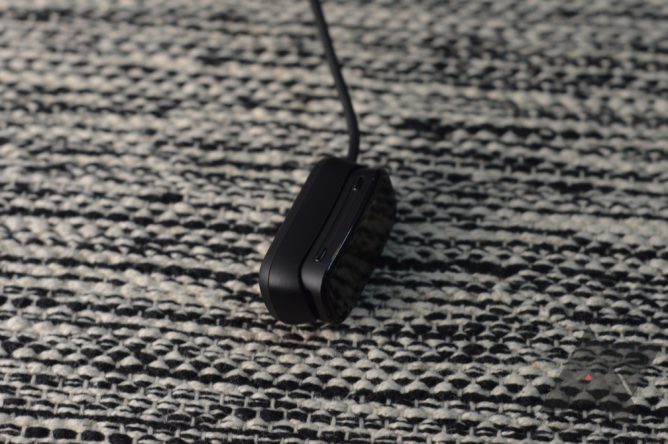 In terms of its battery life, the OP Band is decidedly okay-ish. My use case included regular work and personal notifications, heartbeat tracking at the default interval (every two minutes), regular sleep monitoring with SpO2 enabled. With that kind of usage, the band died in a little under 6 days. That figure can further come down if you do more frequent GPS-assisted workout tracking sessions. While technically, you can squeeze a little more juice out of the band if you dial down some tracking frequencies, but it'd still be no match for the claimed 14-day backup.

OnePlus Band
7/10
Maybe. Sure, the OnePlus Band has a clean design and an intelligible interface, but those things work in its favor only until you look at the competition. It gets the basics right, but its below-average battery life, limited sleep tracking, and lack of third-party integrations make it a hard sell over something more complete like the Mi Band 5.

There are quite a few buts that keep me from giving the OnePlus Band a wholehearted thumbs up, at least at its current retail price. The band isn’t quite ready for prime time when the similarly priced Mi Band 5 does everything better. Still, OnePlus' first wearable is respectable and it''ll be interesting to see what it can do if the rumored smartwatch ever launches. 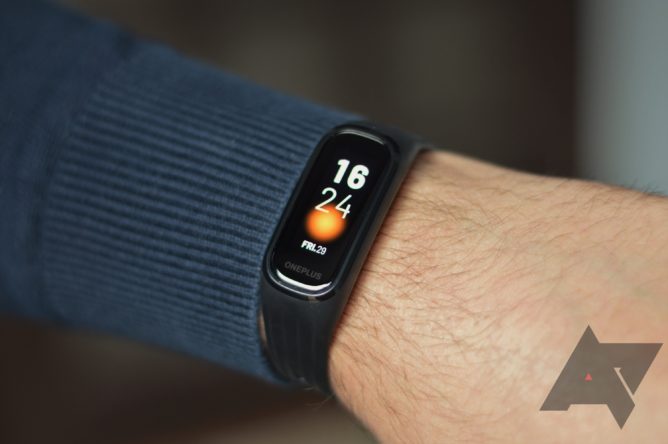 I’ve been wearing the OnePlus Band constantly for over a month now, and I must reiterate how well-made it is. The high-quality glass cover that OnePlus used has remained scratch-free despite the Band bumping into things throughout the day. The silicone band also feels nicer than similarly priced trackers.

During this period, OnePlus pushed a handful of firmware updates, in an attempt to fix some of the glaring issues we pointed out. The resulting improvements are indeed noticeable in certain areas, but unfortunately, those updates weren’t substantial enough for me to reconsider my original opinion — I’ll tell you why. 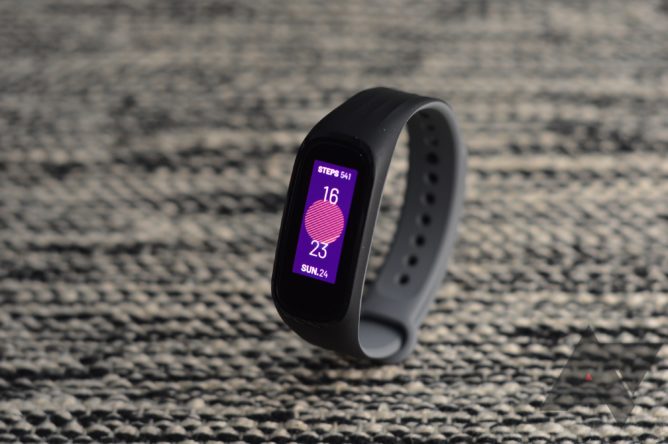 The excessive awake time measured during my sleep cycles has come down to more consistent levels, but they still don’t match my actual figure. It has come to the point that on days when I actually wake up during my sleep time, the Band is accurate to the minute, but on others, I still routinely see a few extra minutes added. After seeing such considerable improvements in just over a month, I’m hopeful that OnePlus can further fine-tune the tracking algorithm (and maybe even introduce REM measurement).

One issue that I continue to face is the fitness tracker’s spotty connection with my phone. When the Band gets back into the phone’s Bluetooth range after being outside even for a few minutes, it sometimes fails to reconnect automatically. Manually reconnecting via the companion app is the only solution, and you must remember to do that on each occasion if you don’t want to miss any important notifications.

Battery life continues to be inconsistent as well. In one instance, I had to remove the capsule from charging at 44% before stepping out. By the time I got back home several hours later, the battery was back down to 17%. This was a bad day, though. In general, the OnePlus Band lasts me between 5 and 7 days consistently. It’s fair enough, but not something to cheer about considering the competition does much better in this regard. 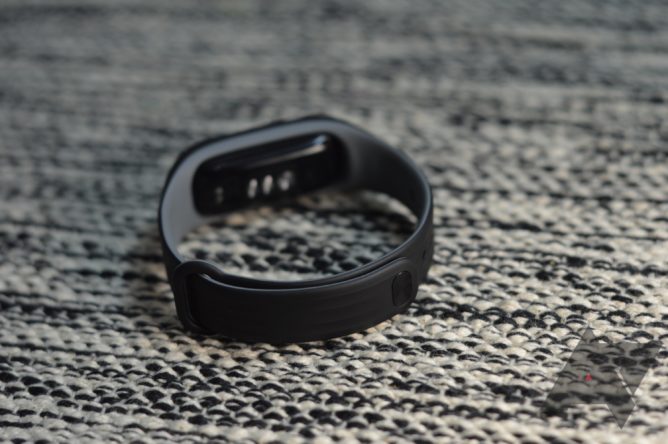 Notifications are still a bright spot for the OnePlus Band. Glancing at those pop-ups helps me decide whether something requires my immediate attention — and that’s without the added bulk of a smartwatch. I’ve also started using the Band’s music controls more frequently than my TWE’s touch gestures, mainly because of all the additional options I get on that tiny screen. It even plays nice with my Chromecast if the media was cast from my phone.

Despite some of these neat (but peripheral) features, it’s still hard to recommend the OnePlus Band to anyone, especially Indian consumers, who are spoiled for choice in the budget segment. A lower price wouldn’t have helped either, as the last-gen (and now cheaper) Mi Band 4 would’ve easily crushed it. What OnePlus probably needs to do is focus on a follow-up fitness tracker that can stand shoulder to shoulder with its prominent rivals.

My instinct says that this cheap fitness tracker is just a guinea pig for OnePlus, which is trying to perfect the Health app for its rumored upcoming smartwatch. Hopefully, that doesn’t turn out to be the case and the company does release a better second-gen fitness band.