Even though it only started in 2016, Reliance Jio is now the largest telco in India and has helped push the adoption of digital services with data plans that are among the cheapest in the world. However, it's not resting on its laurels and is actively looking to expand its scope by offering tech hardware such as entry-level 5G phones and VR glasses. What is also in the pipeline is an affordable laptop that runs Android and is powered by a Qualcomm processor.

According to a report by the folks at XDA Developers, Jio is building a laptop — dubbed the JioBook — that could be announced later this year. Instead of using Google's Chrome OS that works fairly well on meager hardware, it's said to run a forked version of Android 10 (at least the EVT model) that may be called JioOS. If this turns out to be the case, the poor experience of Android apps on large displays might limit its appeal.

On the hardware side of things, the prototype is powered by the Snapdragon 665, which we've seen in phones like the Redmi Note 8 and the Nokia 5.3. The Qualcomm chip has an inbuilt X12 modem which will let the laptop connect to a 4G network, Jio's core product. Various configurations have been tested, apparently, including 2GB+32GB and 4GB+64GB variants. 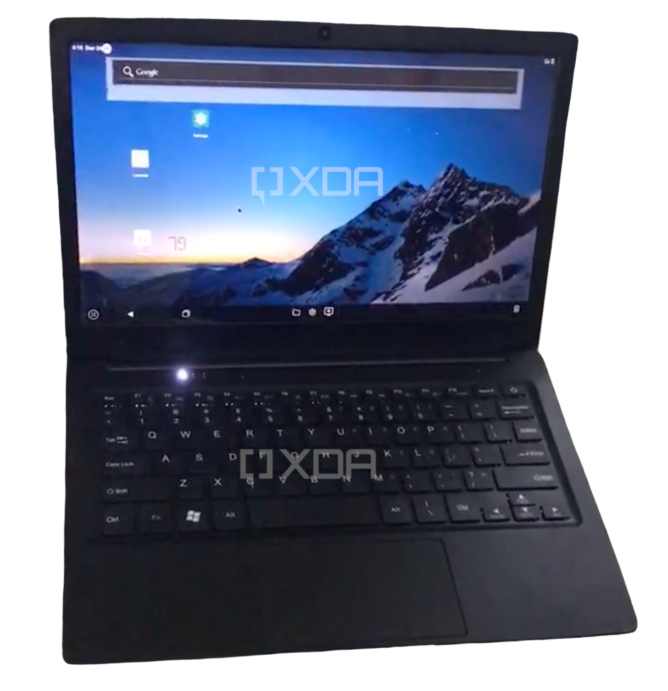 A prototype JioBook, complete with a Windows key.

This picture of an EVT model shows a pretty basic-looking laptop that likely uses polycarbonate or a similar material to keep costs low. Don't let the Windows key fool you, as this seems to be a recycled keyboard used just for testing purposes. It will be swapped out for a more fitting key (probably Google Assistant) during later stages of development.

From the looks of it, the JioBook isn't built to wow a spec-hungry audience. Given the company's track record of offering affordable hardware (read: JioPhone), it's meant to be a low-cost, connected laptop for a population segment that has probably never had one before. Alternatively (or additionally) this could also be positioned for the education market in India.