This article is part of our Smart Display Tips series.

Google's Nest Hub smart displays use voice commands for most functions, which means they are usually easier to use than smartphones or PCs. However, the (general) lack of a graphical user interface means discovering features can be difficult. Google does show tips and tricks on the Hub's home screen, but they don't cover every possible option and feature.

In this guide, we'll go over some helpful features in Google's line of smart displays in particular: the Nest Hub (formerly named the Home Hub) and Nest Hub Max. Most of these features should also work on third-party Assistant displays, like the Lenovo Smart Display, but there are subtle and not so subtle software differences between the two categories.

By default, the Nest Hub displays recent images from your Google Photos library when not in use. You can change this behavior by selecting your smart display in the Google Home app, then tapping the Settings gear button, and finally selecting 'Photo frame.'

Here you can select what will appear on the Nest Hub's main screen: images from Google Photos, an art gallery, or a fullscreen clock. If you choose Google Photos, you can pick specific albums, in addition to the default 'Recent highlights' collection.

There are a lot of settings in the Photo Frame menu you can try out, including a temperature display, alerts for upcoming events, and even how quickly the display cycles through photos. You can get a pretty personalized look, and this really is a killer feature for smart displays in general.

Turn off the screen at night

If you keep your Nest Hub in a bedroom or other area where it could be distracting when the room lights are on, you can set the Nest Hub to turn its display off when it detects the room is pitch black. Select your Nest Hub in the Google Home app, tap the Settings gear button, and select Display Settings. 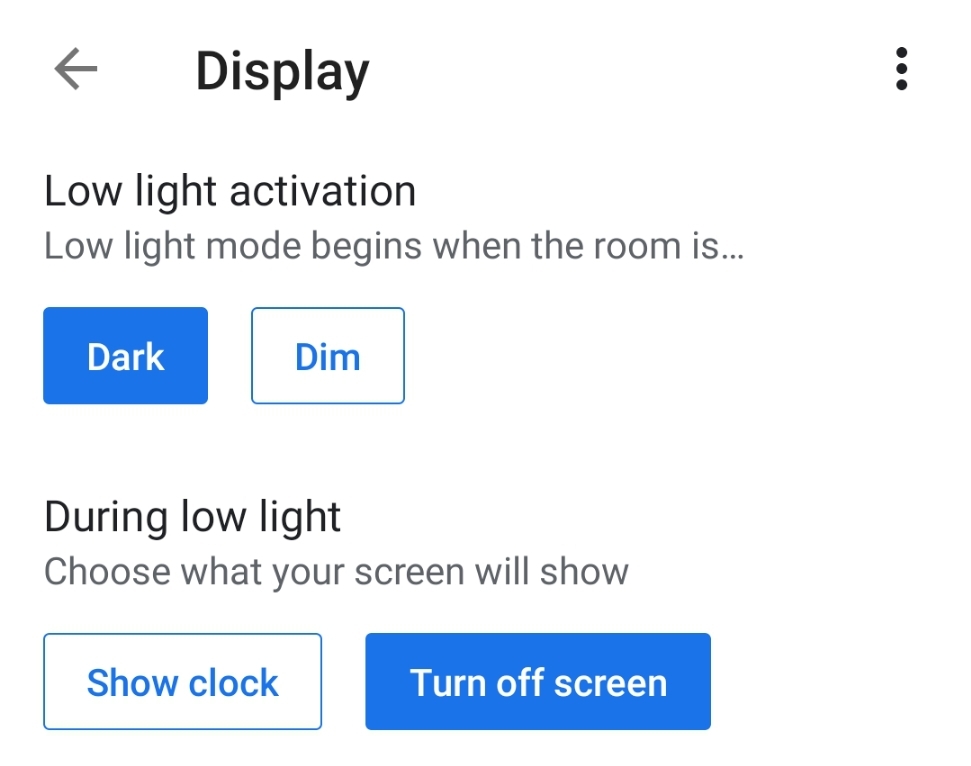 There are a few different options you can play around with on this menu, but the one we're looking for here is the 'During low light' setting. Select 'turn off screen,' and your Nest Hub will never bother you again in the dark with its screen glow — unless you ask Google Assistant a question, anyway.

You probably already know that you can watch YouTube on the Nest Hub, but what about other content? Perhaps the most versatile aspect of the Nest Hub is that it functions as a Chromecast target, so you can press the Cast button in almost any app on your phone to play content like music, podcasts, and movies on the Nest Hub's screen.

You can play podcasts from Pocket Casts, watch series from services like Plex and Hulu, stream your favorite games from Twitch, cast a Chrome tab from your PC, and much more. In most cases, you can even pause or skip content with voice commands ("Hey Google, pause") or by tapping the screen. 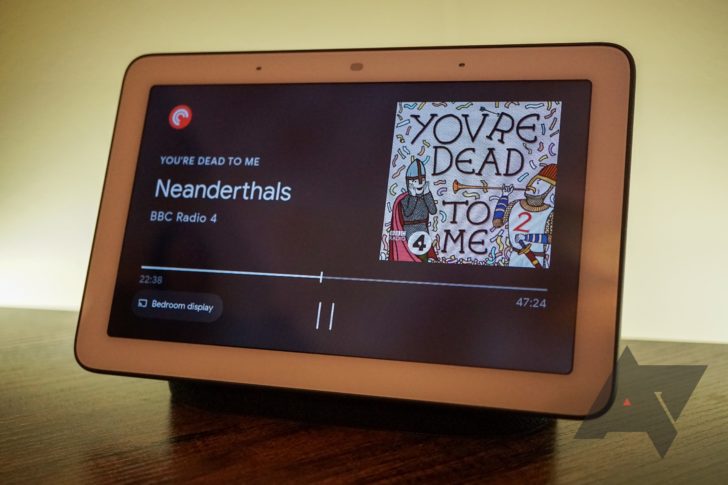 Pocket Casts on the Nest Hub

The main catch is that a handful of content providers block the ability to Cast to smart displays. Amazon Prime Video is the main offender here, as Netflix finally enabled casting support on the Nest Hub (but not third-party displays) in 2020. Presumably, Amazon would rather you buy an Echo Show if you want to watch Prime Video on a smart display.

Did you know Google Translate's interpreter mode is available on all Assistant smart displays? The feature arrived in mid-2019, and allows two people to speak to each other in different languages, with your smart display acting as a two-way translator. To gets started, say something like "Be my French interpreter" or "Help me speak Spanish." 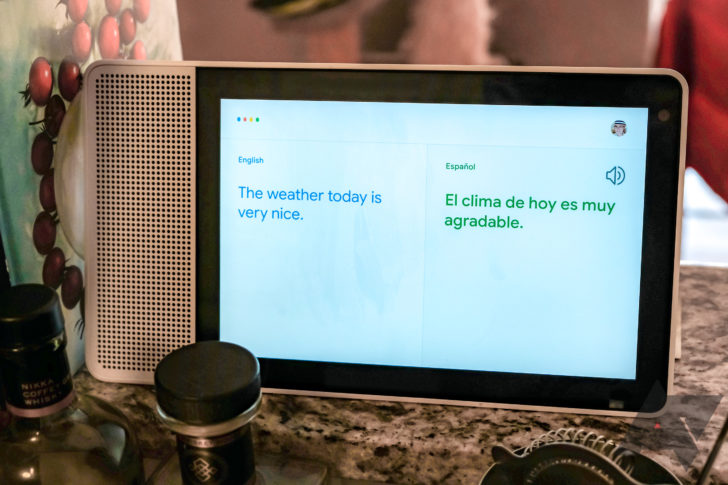 The feature is still prone to Google Translate's usual problems with complex sentence structures, and it only works with around 30 languages, but it's still an interesting function that could come in handy.

While there are probably better ways to show off your vacation photos, you can start a slideshow of images from your Google Photos library on your Nest Hub. Just say a command like "show my photos from Florida" or "show my photos of Bob," and matching images will cycle through on the display.

This works with the same search queries as the Google Photos app, so matches are usually very accurate — even specific commands like "show my photos of raccoons" worked for me.

Google Assistant Routines are as close as you can get to automation on the Nest Hub. Once you create a Routine and give it a command phrase, saying the activation phrase will start any actions contained in the Routine. For example, I created a Routine called "rain" that sets my Nest Hub to a certain volume before playing rain sounds. To activate it, all I have to say is "Hey Google, rain."

To create and edit your Routines, open the Google Home app on your phone, press your profile icon in the top-right corner, select 'Assistant settings,' tap the Assistant tab, then press 'Routines.'

Routines are actually one of the most powerful features you can use on the Google Home platform, so they're really worth checking out. Google has some ready-made ones you can play with, too, like the popular "Good morning" routine that will tell you the news of the day, the weather, and more. They're not as powerful or customizable as something like Tasker, but they can bring a lot of convenience (and simplicity) to your smart display or speaker.

IFTTT, short for "If This, Then That," is an online automation platform that connects hundreds of different services together, including social media platforms and smart home services. You can use it to create DIY integrations between Google Assistant and other platforms, like creating notes with Evernote, restarting your PC, or posting a tweet with a voice command. Basically, they're like the routines above, but with essentially limitless third party service support.

If there's something you can't do with your Nest Hub on its own, there's a chance it could be done with IFTTT. To get started, browse through some of the pre-made Assistant applets, or create your own (that last link only works when you're logged in). 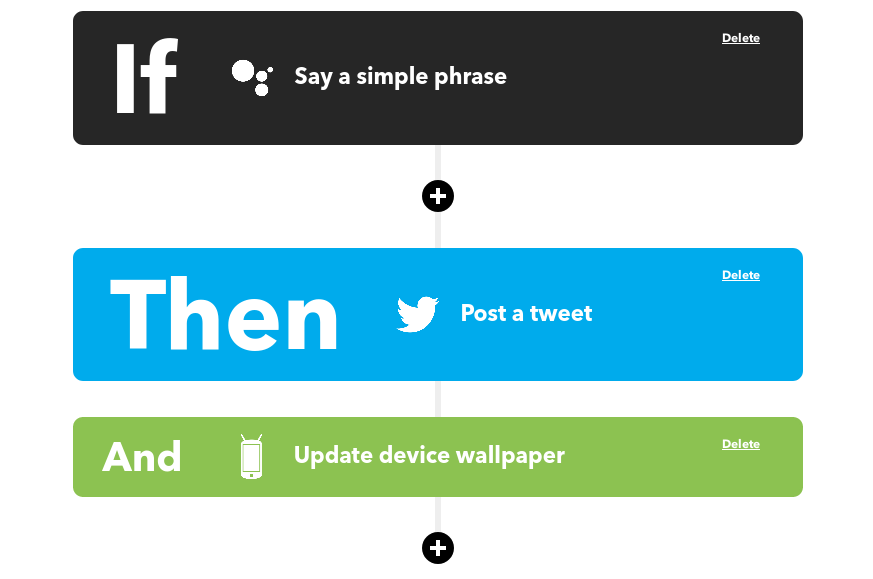 The main catch is that each phrase can only execute one action, unless you sign up for IFTTT Pro, which gives you unlimited applets and the option to create multiple actions from one trigger. Also, if IFTTT fails to execute the action for whatever reason, Google has no way of knowing (and often IFTTT doesn't, either), and won't tell you the command didn't actually work.

By default, the Nest Hub only displays upcoming events from calendars you have created yourself. For example, if you subscribe to an external calendar for upcoming sports events, asking your Nest Display "what's on my calendar" won't include results from the sports schedule. Fortunately, you can change this behavior.

The setting for which calendars Assistant can access is buried deep, so you'd be forgiven for not discovering it on your own. Here's one way to get to it:

Here you can change which calendars Google Assistant (and by extension, your Nest Hub) can read. You can also set the default calendar for creating events to any calendar you have permission to modify.

Add all your services

If you don't want to cast everything from your phone to your Nest Hub, you should connect your favorite video, music, and radio services to Google Assistant. This way, you can ask your smart display directly to play content from Netflix, Spotify, Apple Music, Sling, and some other popular services.

There are a few different ways to do this, but the easiest method is to press the plus button at the top-left of the Google Home app's home screen, then under the 'Manage services' section, you can pick music, video, radio, and other options. Most of the categories allow you to set a default service, which will be used when you don't specify a service in the command (e.g. "play Coldplay" instead of "play Coldplay on Apple Music").

By default, the Nest Hub doesn't play a sound after you say the activation hotword (either "Hey Google" or "Ok Google"), so there's no way to know if it hears you until you stop talking. If you want to add an audio confirmation that tells you the Nest Hub is listening, you can do that.

Select your Nest Hub in the Google Home app, tap the Settings gear button in the top-right corner, select 'Audio,' and finally pick 'Audio accessibility.' You can enable start and stop sounds for Assistant on this screen.

If you want to play audio content on your Nest Hub from another device and Casting isn't available, there's still a way to play audio from it. The Nest Hub can act as a Bluetooth speaker, allowing you to stream audio from any device that supports the Bluetooth protocol. It's especially useful with PCs, iPhones, and other devices that have limited Cast support.

To get started, select your Nest Hub in the Google Home app, tap the Settings gear button in the top-right corner, pick 'Audio,' and finally select 'Paired Bluetooth devices.' Here you can enable pairing mode, which causes the Nest Hub to appear as a Bluetooth speaker to any nearby devices.

This guide has been updated with new instructions for the Google Home app (some menus have been moved around), more information about IFTTT, and a few other minor fixes.

Chrome is revamping user profiles on the desktop