Two years ago, DJI released the FPV System, a partial DIY kit including a camera and transmitter to install on a racing drone, plus controller and goggles for the pilot. While there are other options, DJI's provided the best signal and range for a digital system — yes, analog fans, you still have better latency. But now the world's biggest consumer drone company is jumping in with both feet and releasing its first fully in-house FPV drone, designed with plenty of features aimed at both beginners and advanced pilots.

Getting into FPV drones used to be a pretty daunting experience that began with researching compatible parts and learning to build up from circuit boards. These days you can pick up kits that have worked out all of the tricky bits, but they still have many of the DIY characteristics. DJI is the first company to produce a fully consumer-friendly FPV drone designed for different purposes and skill levels, with all of the advanced technology we're used to seeing on the Mavic lineup.

Simply named DJI FPV, the new model aims to be a hybrid between traditional photography drones and the more racing-oriented FPV units. It's capable of speeds up to 87 mph (140 kph), and thank to the use of modular parts, it's easy to repair or replace most of the components if they're damaged in a crash. Batteries are rated for a maximum of 20 minutes flight time, but that will depend on usage.

Communication is achieved with DJI's latest O3 (OcuSync 3.0) system, which delivers low-latency control and a clean visual signal over long range. The camera can capture up to [email protected] (120Mbps) continuously, and optionally smooths the footage with the same RockSteady (EIS) electronic image stabilization used on the Osmo Action.

Three flight modes allow for pilots of different skill levels to control the aircraft with the right features for their needs. Beginners and casual fliers will use the Normal mode that automatically hovers in place and provides warnings about nearby objects. Advanced users will switch to Sport or Manual mode to turn off some of the safety features and gain more maneuverability.

Naturally, all of the obligatory safety features are present, including object detection (but no avoidance) in Normal mode, automatic return-to-home in the event of lost signal, and an ADS-B receiver to detect nearby aircraft like airplanes and helicopters. There's even an emergency brake button that can quickly engage hover if you lose control of the drone.

The DJI Fly app will also be updated in the future to include a simulator to practice flying in FPV Manual mode. The iOS version already has this capability, but it will come to Android. And as you might expect, the DJI Fly app can also wirelessly copy all of your recorded videos from the FPV and edit them without switching to another app.

DJI didn't stop at building its first FPV drone, it's also launching a brand new motion controller designed for one-handed use. This can take the place of the standard two-handed controller and provides virtually all of the same features, but uses gyroscopic data to control the drone's flight. 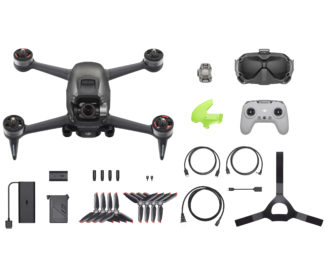 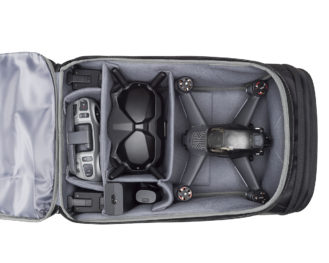 DJI is making the FPV available to order today with a few options. The basic package is priced at $1,299 and includes the drone, goggles, standard controller, a single battery, and all of the necessary accessories. As usual, it's advisable to also pick up the Fly More Kit for an extra $299, which adds a charging hub and two batteries (for a total of three). Sadly, it doesn't include the custom backpack, which is available separately. Finally, if the standard controller isn't to your liking, the Motion Controller is also sold separately for $199.

If you're interested in buying the DJI FPV (or anything else from DJI), you can use my referral link to get $10 off your order and help me inch toward my own DJI FPV.