Carriers and manufacturers are super excited to sell you a 5G phone, even if there's very little benefit to buying one in 2021. The feature has slowly trickled down to sub-flagship phones, and Motorola recently started selling its cheapest 5G device yet: the Motorola One 5G Ace. At a price of $400, it's competing directly with phones like the Galaxy A71 5G, Pixel 4a, and Pixel 4a 5G.

The Motorola One 5G Ace isn't a terrible phone, but it does fall behind the competition in many areas, all in pursuit of 5G connectivity — something that just isn't that important right now. There are better ways to spend your hard-earned $400.

Massive smartphones are all the rage these days, and the Moto One 5G Ace follows the trend with its 6.7-inch screen. The phone is physically larger than the Galaxy S21 Ultra, and is roughly the same size as the Galaxy Note20 Ultra (the Note20 Ultra is 1mm wider). It's almost 10 mm deep (0.38 in), making the Ace one of the thickest Android phones in recent history. The massive frame makes it possible for Motorola to stick in a large 5,000mAh battery — more on that later. 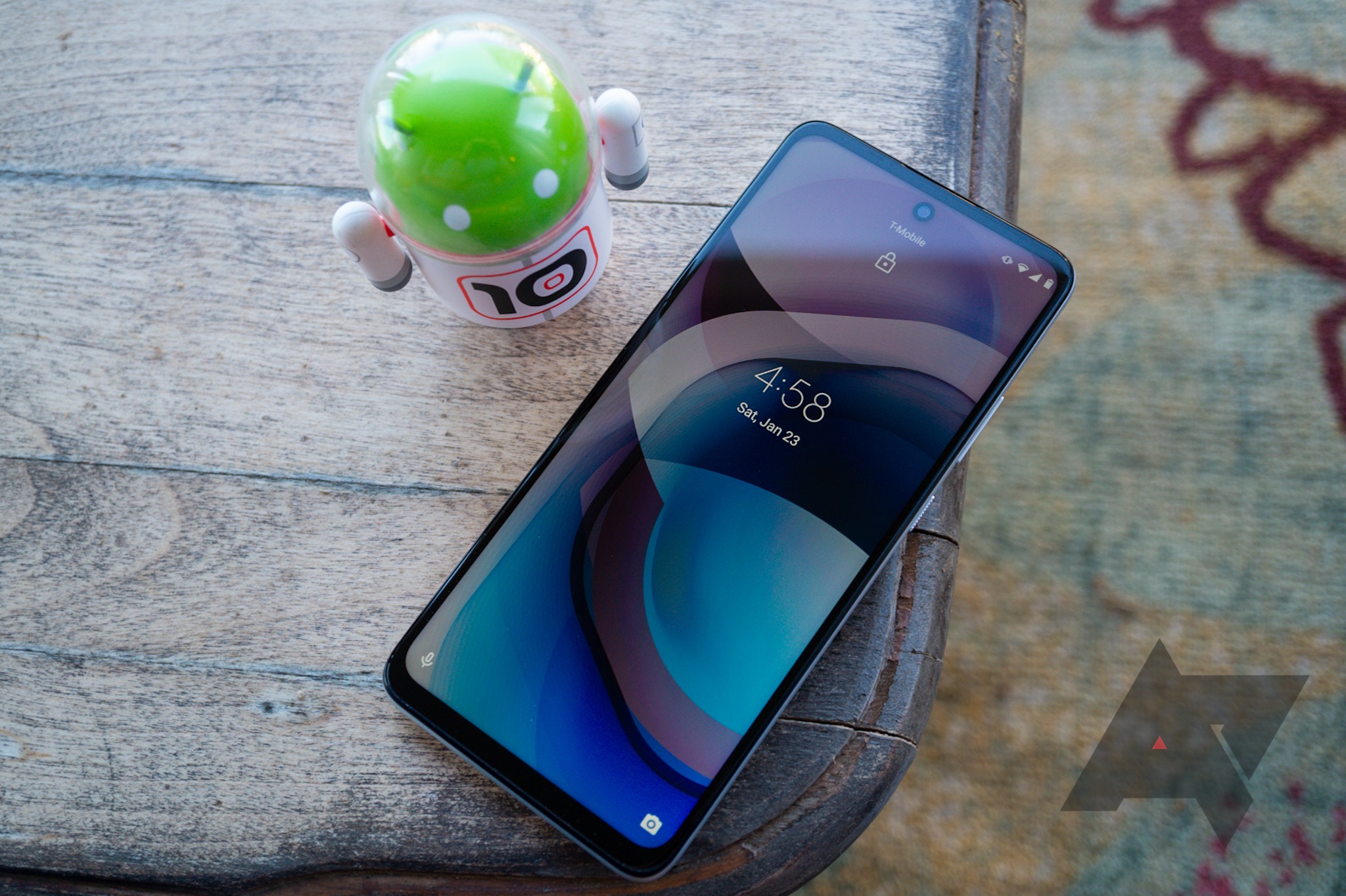 The 6.7-inch screen carries a resolution of 2400 x 1080, but annoyingly, Motorola has opted for a cheaper LCD screen instead of an OLED panel. Most other devices in this price range offer OLED screens, like the Samsung Galaxy A50 and Google Pixel 4a. This seems like one of the main corners that Motorola cut to bring the Ace down to $400, and it makes the phone more difficult to recommend. If I have to choose between a better screen (which I look at every day) or 5G connectivity (which I won't get every day), I'll always choose a better screen. There's also a 16MP selfie camera in the centered cutout.

The sides and rear of the 5G Ace are plastic, but the back casing has a slightly-reflective texture that easily attracts fingerprints and smudges. It's better than the glossy plastic seen on many other budget phones, but a matte finish probably would have been better. There's also a fingerprint sensor on the back, which was a refreshing change from the in-screen sensors on recent flagship phones I've used — I didn't have to look where the sensor was before placing my finger, and unlocking is lightning-quick. 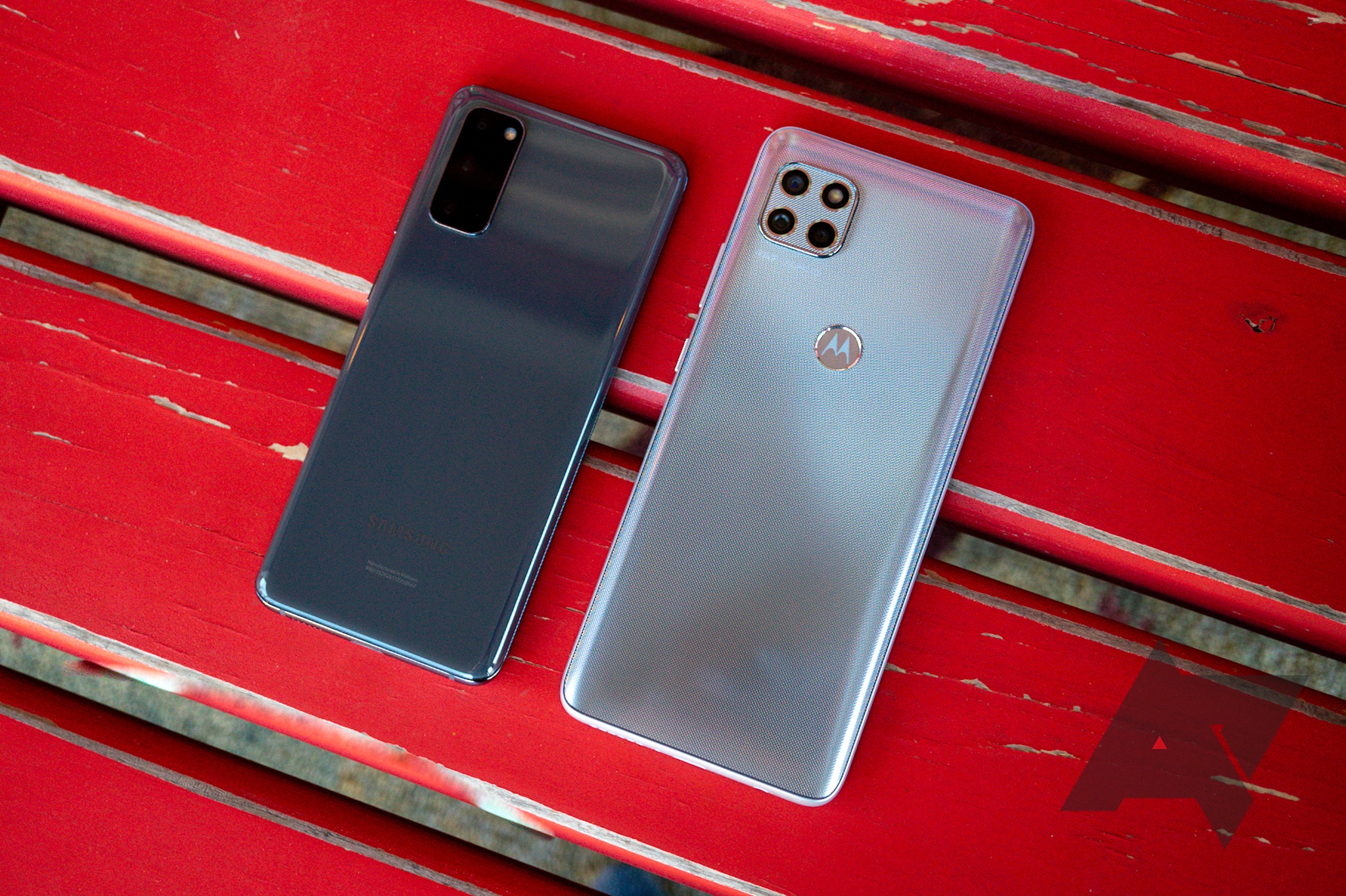 Power and volume buttons are located on the right side, and while they do feel a bit mushy, the power button at least has a distinctive texture, so you can find it without looking. The right side only has the microSD/SIM card slot, and on the bottom, there's a USB Type-C port and a headphone jack. Motorola also placed the single speaker on the bottom, which gets decently loud, but becomes heavily distorted at higher volumes. 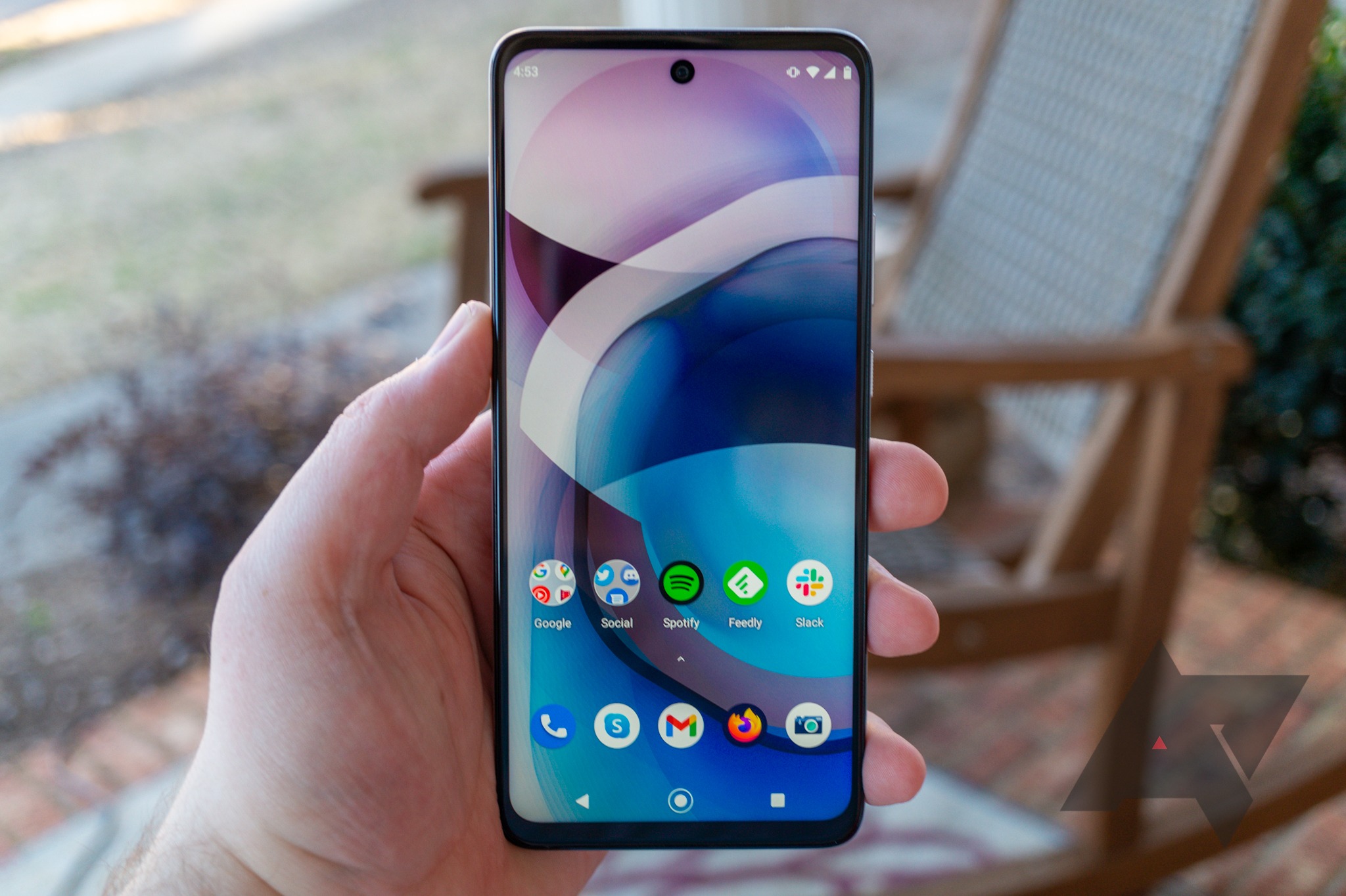 In the box, you get the phone, a 10W USB wall adapter, and a USB Type-A-to-C cable for charging. I tried third-party wall adapters and batteries that support Qualcomm QuickCharge and USB-PD, and I wasn't able to charge at higher than 10-12W with either technology. Motorola says the phone supports up to 15W using the company's own TurboPower power bricks, but TurboPower is just rebranded Qualcomm QuickCharge. It's going to take a long time to fill up that 5,000mAh battery.

The One 5G Ace uses Motorola's usual software stack: stock Android, Google apps, and a few extra useful features (most of which can be ignored, if you don't want them). Beyond the usual functionality offered in plain Android 10, you get the signature Moto gestures, like twisting your wrist to open the camera and chopping the phone to toggle the flashlight. My personal favorite is the "swipe to split" gesture for multi-window, as it lets me activate split-screen mode without interrupting video playback.

There is one major catch to the 5G Ace's software: the updates. Motorola isn't great with software support, even on its most expensive phones (the Moto Edge+ currently has a 5/10 on our security update tracker), and the company's plans for the 5G Ace are embarrassing. The phone comes with Android 10, which has been out of date for four months now, and Motorola is only promising a single update to Android 11 and two years of security fixes. When Google's Pixel 4a is $50 cheaper and will get three years of OS and security updates, and with Samsung offering the same on many of its budget phones, only two years of support and a single OS update is cost-cutting to an unacceptable degree.

On the bright side, performance on the 5G Ace is excellent. The Snapdragon 750G chipset ensures apps open quickly and animations are smooth, and the 4GB RAM (or 6GB on some models) is enough to keep a few apps in memory. Most people wouldn't be able to tell the difference in performance between this and a typical flagship phone, except when it comes to gaming, where the 750G falls behind a bit. If you're interested in benchmarks, the LG K22 earned 28.8 in Speedometer 2.0 (in Chrome 87) and 3,994 in 3DMark's Sling Shot test. With Geekbench 5, the phone scored 659 in single-core performance and 1969 in multi-core (full results here). In all tests, a higher number is better.

Battery life is also fantastic, but that shouldn't be much of a surprise — Motorola shoved a massive 5,000mAh cell into the 5G Ace. I ended most days with 50-60% battery remaining, so most people should be able to go two days (or possibly a bit longer) between charges, and even longer if you turn off Motorola's Peek Display feature.

The Moto One 5G Ace's main camera is a 48MP sensor, but because Motorola combines pixels from the raw input, photos are actually captured at 12MP (the default) or 8MP. You also get an 8MP ultra-wide lens and a 2MP macro, plus a 16MP lens on the front (which captures at 4MP by default). Photo quality on the main camera is decent, given you have plenty of lighting, except that Motorola's image processing sometimes ramps up the contrast significantly. Finally, the macro camera is fun to play with, but with an even lower resolution of 2MP, it often fails to capture fine detail... which is the entire point of a macro lens. Only if you get it at a significant discount. The Motorola One 5G Ace is the latest in a long line of phones, including the Nokia 8 V 5G UW and OnePlus Nord N10 5G, that prioritize 5G support over more important features. As much as carriers would like you to think otherwise, 5G just isn't that important right now, and it shouldn't be the main deciding factor in your smartphone purchase.

Besides 5G, there's very little that the Ace does better than other phones in the sub-$400 price point. The Google Pixel 4a is still the best option here, with more RAM, twice the storage, faster charging, a better camera, an AMOLED screen, and a lower $350 MSRP. If you want a screen closer in size to the One 5G Ace, the Pixel 4a 5G and Galaxy A71 5G are solid options, though they're a bit more expensive. If you wait for a sale, or you have something to trade in through Samsung.com, you might even be able to get the Galaxy S20 Fan Edition for around the same price as the Ace.

Motorola's consistently-poor policy on software updates also makes the 5G Ace a more difficult recommendation. Three years of OS and security updates are now the norm, but the Ace is shipping with a now-outdated version of Android, and Android 11 is the only guaranteed OS upgrade. The Pixel 4a and Galaxy A71 5G both started with three years of promised support, and Motorola needs to start guaranteeing the same support cycle.