The death of Google Cloud Print had one unanticipated consequence: For whatever reason, Google also tied Chrome's built-in "Save to Google Drive" feature to it. Now that Cloud Print is disappearing, that feature is leaving with it. But there's an easy way to bring it back to Chrome for Desktop, and a slightly longer workaround for (at least some) Android phones.

It's actually a fairly simple process to bring Save to Google Drive back to Chrome for your PC, and the replacement should seamlessly take over for the loss in functionality. I did notice a few issues trying it for the first time myself, but if you follow a few basic steps, you shouldn't run into any trouble.

For many of our readers, the following should be an intuitive process, but there are a few hiccups you can run into while installing the required extension. So, for caution's sake, we've included the full instructions below. 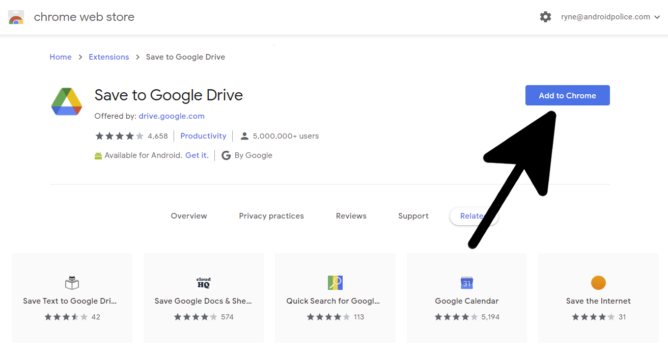 2. Just to be safe, restart Chrome. (All of the extension's features didn't work everywhere for me until I restarted, but YMMV.) 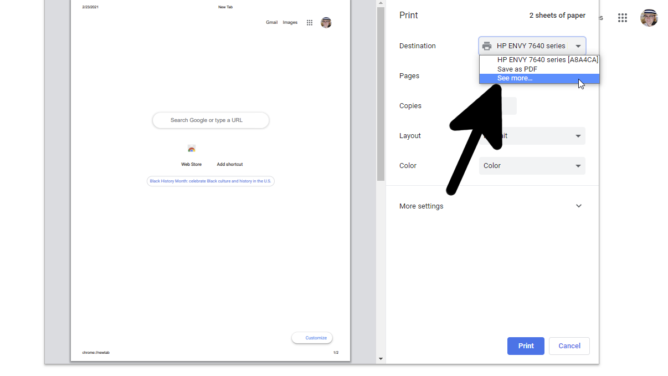 Print a test document or website and select "see more" in the print menu.

4. In the print menu, select "destination" and select "see more." The "Save to Google Drive" option doesn't appear in the default list until you use it at least once, so let's do that. 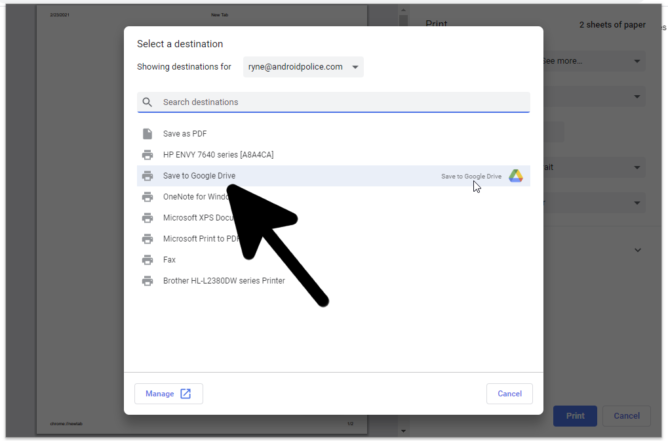 Select "Save to Google Drive."

5. In this new "select a destination" dialog, choose "Save to Google Drive." It will probably be the first item on the list below any physical printers. 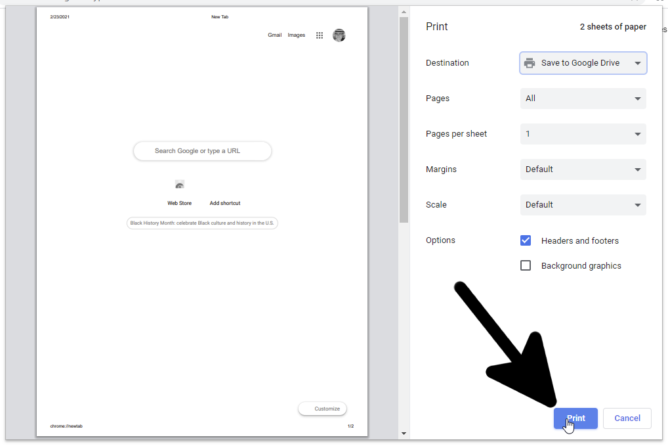 6. You'll be dumped back to the print menu, but now the "destination" should read "Save to Google Drive." Select "Print." 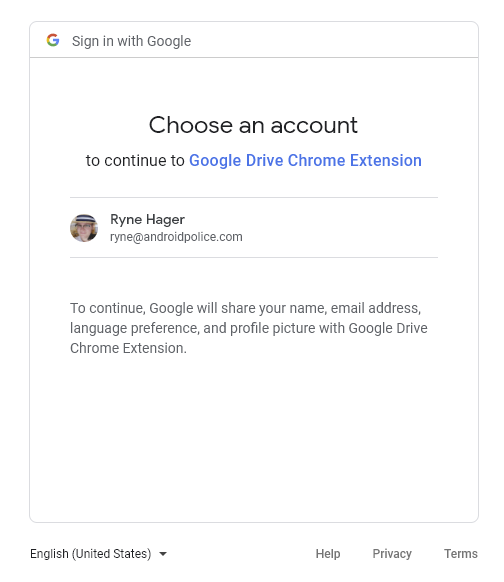 7. After a short delay, a new screen will open, asking you to select an account to use for Google Drive, listing all those you might be currently signed in on. Because this is an extension and not something built into Chrome anymore, it needs separate access to your Google account to work. Select the account you'd like to have it save PDFs to and grant it the requested access. 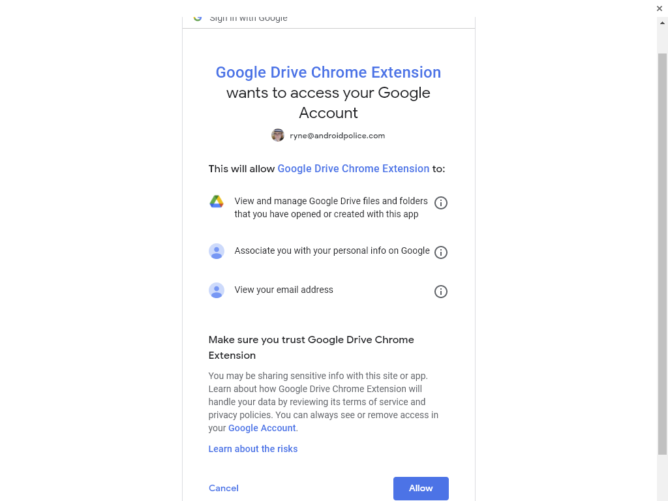 8. Once you've granted it access and followed the prompts, all of these screens will close, and your test print job will be saved to Google Drive as a PDF. Following this test-run, you can delete the PDF we just saved, and the option to save to Google Drive should appear in the drop-down "destination" menu from now on. 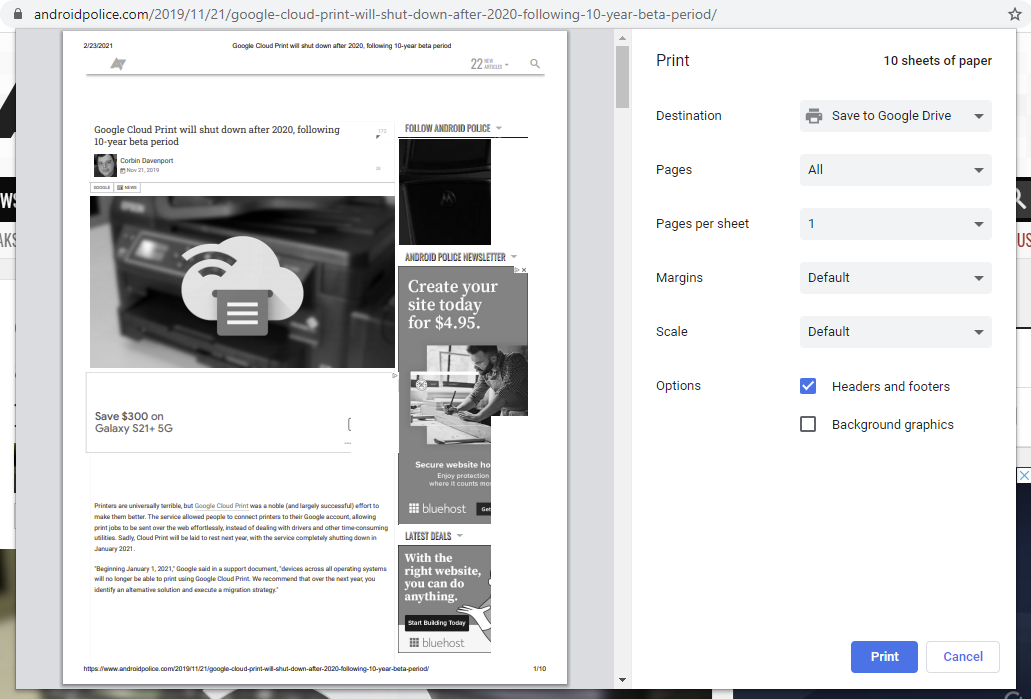 And all is right in the world again.

The Save to Google Drive extension also has a few other features, like the ability to save a scrolling screenshot of a webpage as a PNG image instead of a PDF, just by selecting the extension from your overflow list. You can also right-click images on webpages to directly save them to Drive — handy.

Above: Even desktop Chrome gets scrolling screenshots before Android. Below: And you can save images to Google Drive directly, too. 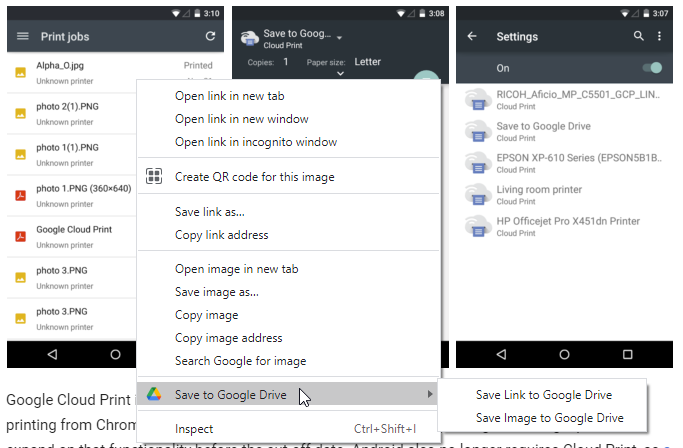 It's a bummer that Google took the feature out of Chrome itself, and digital receipt hoarders like me may lament its loss, but setting up this replacement doesn't take too long. Unfortunately, since it requires an extension, that means this particular solution won't fix things on Chrome for Android. Mobile users will have a harder time.

On some devices, like Google Pixels or OnePlus phones, there's a relatively simple workaround, though it's more convoluted than the single step we had previously.

Saving as a PDF to Google Drive on devices like Pixels and OnePlus phones.

From the print dialog in Chrome (Three-dot menu -> Share -> Print) you can select "save as PDF," and when the Google Files app launches, navigate to a location in Drive, easily accessible via the side navigation menu, and tap "save." Easy.

But this workaround may not be available on all phones. Recent Samsung devices, for example, open a different app (Samsung Files) when you tap that download button. While it may vary based on your software version, testing the latest Galaxy S21 and One UI 3.1, the view it opens will only allow you to save the PDF locally to the phone itself. This is even though the Samsung Files app supports Google Drive integration. Furthermore, Samsung doesn't allow you to replace that app with Google Files for the above workaround, and I suspect it could be a similar story with other phones running heavily modified versions of Android.

In short, it's a bit of a crapshoot on Android devices whether or not you have a simple workaround, and the consistent experience you used to be able to rely on is gone.

While it's nice that Google offers a Chrome extension as a workaround, this change is more work for seemingly no reason. And on Android, the options for a workaround can be an inconsistent experience depending on your phone's software. For those that criticize Google for randomly killing features they depend on, all this is just further evidence for their position.

Chrome OS is getting presentation-ready with new native tools