For years, you've been able to trigger extra sound effects on the Google Home when reciting a handful of Little Golden library books. This Read Along feature worked with a small library of Disney titles, which has changed over the years. Earlier this week, though, Google massively cut the number of titles available to a mere five.

In case you're unfamiliar, you can trigger this feature by asking the Assistant to "read along" or "let's read along with Disney." Once triggered, the feature (inconsistently called Read Along or story mode in Google's documentation) allows you to select a title and it will play sound effects along with your own recitation. Keep in mind: You need the actual book to read from, still.

Up until Tuesday, February 23rd, Google claimed to have 17 titles in its Read Along library (reflected in this Wayback Machine archive), but the list has been cut down to five books, together with a warning that Google is "no longer supporting this feature for some titles."

The full list of titles that have been removed and those still present is just below:

Removed titles have been struck-through.

Notably, although Google claims "Ara the Star Engineer" is no longer included, it still appears in the list when you trigger the Read Along feature. The title was previously available as a free ebook to read along with, though that reference is also gone from Google's support documents. Disney's website still claims that all the titles are still available, though we can confirm in our own testing that the list has been cut down. 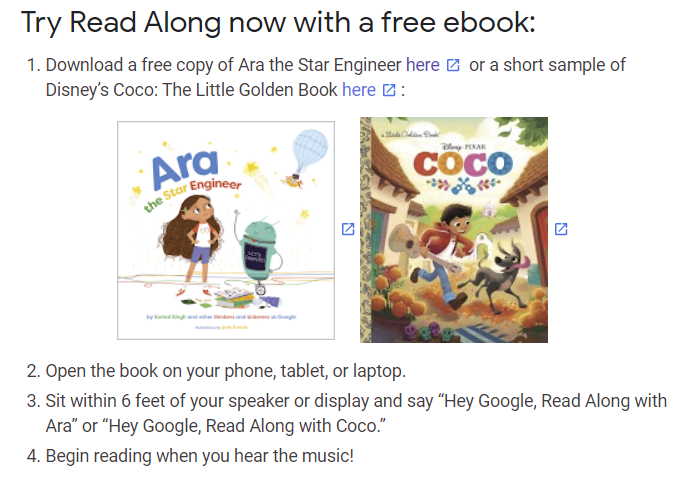 This section of the support document has also been stripped out.

It isn't immediately clear if the change is due to Google or Disney — the latter is the rightsholder for almost all of the titles that the feature supported. Whatever licensing agreement Disney had in place with Google may have expired, though it's curious that a handful of titles escaped removal. We've reached out to Google in case the company has more information regarding the change.