T-Mobile is debuting a new wireless service plan on Wednesday called Magenta MAX with no network throttling thresholds and room to upgrade the already-provided free Netflix plan from the basic tier to standard on family accounts. With the new plan comes upgrades for an older plan as well as switcher offers for AT&T and Verizon customers.

Subscribers to the Max plan which will succeed the existing Magenta Plus will receive unlimited talk, text, and cellular data with no throttling threshold for the first time. They will also get double the high-speed hotspot allotment at 40GB (3G speeds thereafter) and double roaming data speeds of up to 256kbps in 210 countries. Gogo Inflight Wi-Fi users get a massive increase from 1 hour of free use to unlimited while the Netflix on Us promo gets extended to single-line customers for the first time since its 2017 launch, though only at the Basic tier — multi-line accounts stay with the Standard plan.

The carrier says its 5G network brings enough capacity to forego the need to slow down customers who are in a congested area and have used too much data in a month (though we remind you that the policy only applies to this, T-Mobile's newest, most expensive plan). 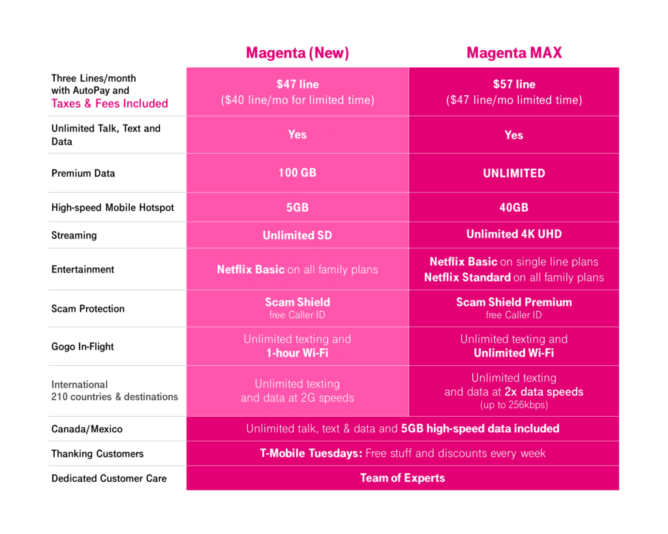 Magenta MAX will launch on February 24 with an introductory three-line price of $47 per line per month — the current price for Magenta Plus — before settling at $57, all after AutoPay with taxes and fees included. If you take advantage of the $47 price, $10 monthly bill credits will be provided until you cancel the plan.

At the same time, a new Magenta plan, $40 per line per month at three lines, will remain at that price for a limited time before rising to $47 — again, hop on the introductory offer to get bill credits. Subscribers will get two improvements from the current, disparate Magenta plan: a doubling of the throttle cap from 50GB to 100GB of use, and; an increase in high-speed mobile hotspot data from 3GB to 5GB. Other amenities like 480p video streaming and 1 hour of free Gogo Wi-Fi will remain the same.

No word about pricing with fewer or more lines just yet.

T-Mobile customers who wish to upgrade from their old Magenta and Magenta Plus plans to the new ones will be able to move account- and line-level promos. The T-Mo Report received an internally-distributed list of discounts eligible for transfer. 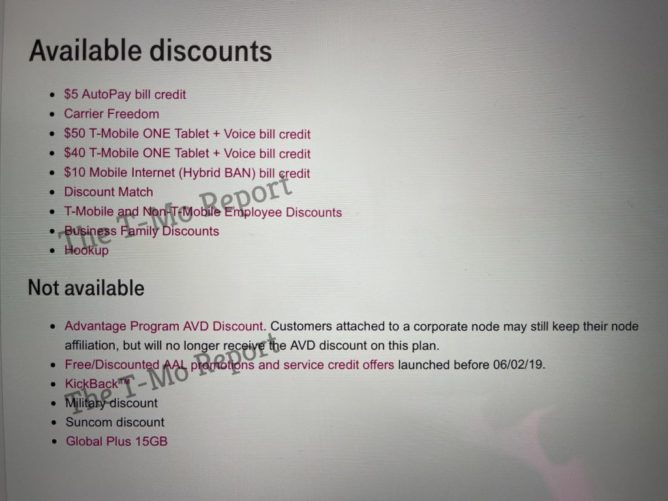 T-Mobile is inviting AT&T and Verizon customers to bring their phone and number over with one of its well-known schemes: it will pay up to $650 via digital prepaid gift card to help defray the switcher's existing device installment contract and waive fees for a new SIM card and support.