It's seldom a good idea to purchase expensive consumer electronics at launch. The initial asking price doesn't stick around for long, and you can save some serious cash if you exercise a modicum of self-control. We've recently seen this happen with the Samsung Galaxy S21 series, shedding a couple of hundred dollars within a month of release. But if you didn't snag that one, Woot has a deal that's worthy of your attention — the Note20 Ultra is on sale for a mere $799.99 with free shipping.

At 800 bucks, that's a whopping $500 off its MSRP and $100 lower than the best deal we've come across yet. For that price, you're getting a lot of phone. Under the hood is a Snapdragon 865+ and 8GB of RAM that will handle whatever you throw at it with ease. It boasts of one of the best displays you'll find on a phone today — a 6.9-inch OLED panel with a 120Hz adaptive refresh rate — and the Mystic Bronze colorway that exudes panache. 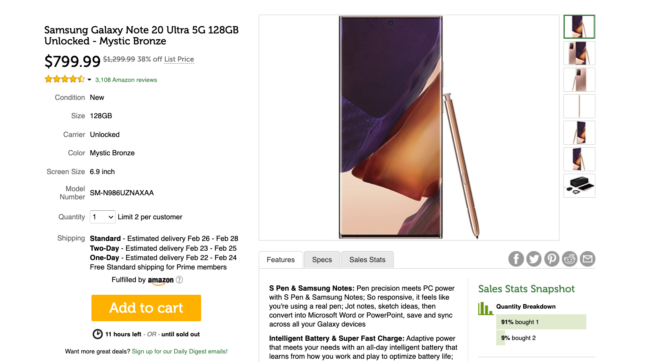 It's even got a versatile camera setup headlined by a 108MP sensor and a periscope sensor that can get some pretty decent shots at 15x zoom (though, not as good as the S21 Ultra's). And being a Note, it obviously has the beloved S Pen that's still the best stylus to ship with a phone.

The deal is valid only for today (about 10 more hours at the time of writing), and Amazon Prime members won't have to pay a dime more for shipping. Unfortunately, if you were looking to grab a bunch of them, each customer is limited to only two units.