You know these notifications you tap and then nothing happens until a minute or two have passed? Twitter used to be guilty of this, but there are still tons of apps out there that exhibit this behavior. Google is looking to make this a thing of the past on Android 12, forbidding apps from using so-called notification trampolines. That should effectively banish slowly loading notifications, and the change is already having an effect on apps on Android 12 today — and we learned that Google apps are among the worst offenders. 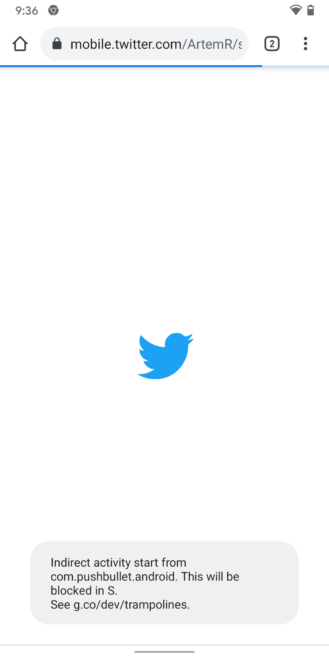 Trampolines are usually used by apps that don't open an activity of their own when you tap a notification, like when you share links with yourself via an app like Pushbullet, and tapping the notification opens the website instead of the app. Google also uses this method for its own "Send to your Devices" feature in Chrome. To save users from a bad waiting experience, Google is willing to break apps that rely on this method and is already showing a toast that the implementation is going away once Android 12 goes stable. Funnily enough, Chrome's own implementation is already completely broken as of now (presumably because the Play Seriv, while Pushbullet users only receive a warning message.

In fact, Google apps are among the worst offenders when it comes to using trampolines. We've spotted the "indirect activity" toast after tapping notifications from quite a few Google apps, including Drive (when launching a Docs, Sheets, or Slides through a notification), Home, and Calendar. 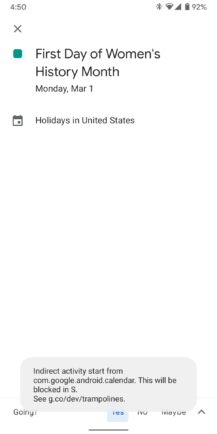 We talked to the Pushbullet developers, who confirmed that they're using what could be considered to be a trampoline. However, since Pushbullet notifications are often only supposed to take you to the browser, there's no reason to start the Pushbullet app only to kill it right after redirecting users to the requested website. There might be a way around the problem by using the PendingIntent class as suggested in the Android documentation, but only rigid testing will tell. In any case, the developers have confirmed to us that they will implement whatever changes are necessary to support Android going forward. Google will probably have to change how it handles notification in some of its apps, too.

You know how you sometimes tap a notification and nothing happens for 5min, then it suddenly pops up? Twitter used to do this and other apps are still guilty today.

Android 12 wants to banish this behavior forever and prohibit notifications from not starting activities directly. pic.twitter.com/QWEEMtKDUO

While the new requirement might make some activities more cumbersome for developers, regular folks will probably just be happy that they no longer have to wait around for their phones to do something after tapping a notification.

Google apps among the worst offenders

Updated to add a few more Google apps that use trampolines.

The 8 best 2FA apps on Android

Opinion: It's too soon to tell what Android 12 will be, but it will be big