When I bought my first Chromebook back in 2020, I imagined a bright future. I specifically wanted a convertible so I could replace my aging third-gen iPad (yes, the one from 2012). And due to Android app support, I thought I would be able to use it as my new media consumption machine. Unfortunately, things turned out to be more complicated, particularly when it comes to video streaming and downloading, and I wish I knew what I was getting myself into beforehand. To spare you the same disappointment, here's what's going on.

After setting up my Chromebook and installing the Netflix and Amazon Prime Video apps, I quickly filled up my local storage with a few flicks and shows to watch — after all, Google even advertises Netflix downloads as a Chromebook perk. While out and about (it was relatively safe to travel where I live during the summer), I noticed that both streaming services only offered sub-par video quality. I first thought it was my fault and suspected I forgot to crank up the download quality in settings, but even when I did that, the resolution remained sub-HD.

I quickly found out that while the Netflix website does support up to 1080p on Chromebooks, the Android app is limited to 480p, whether you stream or download. That's something Google doesn't acknowledge at all in its shiny promo video above. Matters are worse with Amazon Prime Video. A support site mentions that the streaming service restricts quality to standard definition on operating systems other than Windows and macOS. Curiously enough, Disney+ doesn't have these problems at all. It supports HD both in its app and website (though it appears to me as if it's capped at 720p, which is still much better than what Netflix and Amazon offer).

What gives? You might have guessed it already — copyright protection.

Streaming services rely on Google's digital rights management (DRM) technology Widevine, which decodes encrypted video streams. Widevine is comprised of three levels that offer varying degrees of protection, the highest being L1, followed by L2 and L3. Devices that want to have any chance at supporting HD playback on popular streaming platforms usually have to support L1 these days.

It would be simple if you could just say that whatever device supports L1 can stream anything it wants in up to 4K, but it doesn't work that way. Streaming services often whitelist specific devices and hardware components for high-quality video streams, and Chrome OS apparently isn't the platform they give lots of attention.

While we know for a fact that Chrome OS supports L1, Netflix seems to think that the Android container is limited to L3, as specified in the Netflix app settings. That would explain why Netflix restricts HD streaming to the website (where it can ensure the high quality streams are harder to pirate), but it's still odd that the Disney+ app allows for 720p streaming and Amazon doesn't stream in HD at all. It's possible that Netflix just displays the lowest Widevine level because it manually certifies Android devices for HD playback, which we regularly cover. 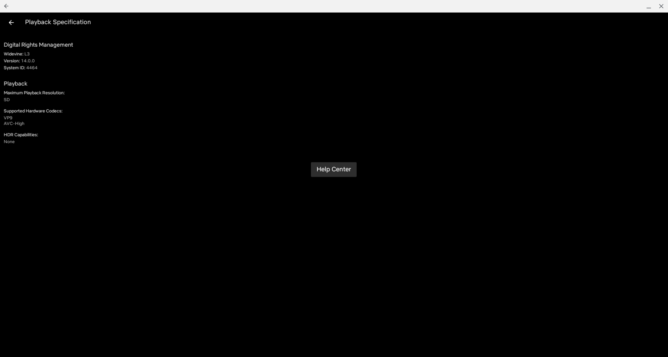 According to Netflix stats, the streaming service only has access to the weakest tier, Widevine L3.

But all of that shouldn't even matter to me as a consumer — Google should do everything humanly possible to create a platform that supports high-quality video playback out of the box if it doesn't want to disappoint customers, and streaming services should do their part to offer subscribers the HD (not to mention 4K) image quality they pay for, regardless of which device they use. It makes sense that streaming services are interested in copyright protection, but given that Chrome OS is capable of Widevine L3 encryption, implementing suitable measures shouldn't be a problem.

My Chromebook does its job fine for blogging, but I'm bummed that it didn't become the all-encompassing machine for productivity and media, as promised by Google. It looks like the iPad remains the best choice for most folks when they want a lightweight device pairing basic productivity with hours of media consumption, and I'm starting to think I might've been better off with the Apple product.

10 new and notable Android apps and live wallpapers from the last two weeks including Apple TV, ...

Android 12 has a hidden One UI-inspired system settings UI