Android diehards love their customization, and Android 12 seems poised to introduce several new system-level ways to make your phone uniquely yours. One such (minor) way: the Pixel Launcher supports a grid size of four by five icons in the first developer preview, a previously unavailable option.

You can tweak your grid size by holding down on the home screen, tapping Styles & wallpapers, then Grid. Scroll down to the second row and you'll find 4x5. Note that this isn't an option on every device compatible with the developer preview; we've been able to get it working on both a Pixel 5 and a Pixel 3a XL, but not the smaller Pixel 3a. 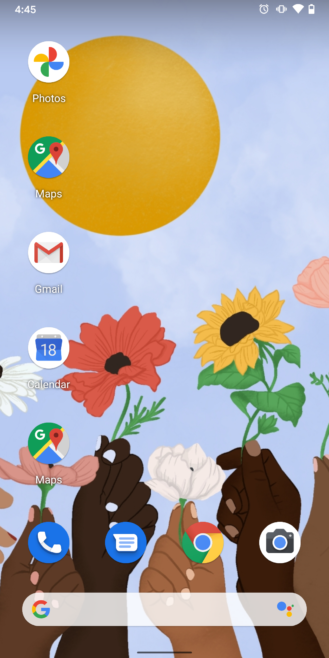 "4x5" doesn't include the Favorites tray at the bottom of the screen.

This is currently the only grid option that lowers icon density without making the icons themselves bigger, so folks who want a cleaner home screen should benefit from it.

Options are rarely a bad thing, and this is sure to tickle plenty a persnickety user's fancy. Maybe we'll be able to set grids of any size in a future release.

Android 12 has an iPhone-style one-handed mode