Android's gamepad vibration functionality is so rudimentary, you could be forgiven for not knowing it's there at all. Last month, though, our friends at XDA spotted signs that the situation could be improving soon — and today, with the release of Android 12's first developer preview, we've got even more concrete evidence.

Two new features in Android 12 look like they could spell improved controller vibration support. First, Google's building in system-level support for "haptic-coupled audio effect(s)." In essence, this lets app and game developers use audio to trigger phone vibration. (Sony has a similar custom feature on its newer Xperia 1 and 5 devices.) Second, a new setting under Languages & input called "Redirect vibration." It doesn't seem to be functional yet, but once it is, it'll send phone vibrations to a connected game controller. 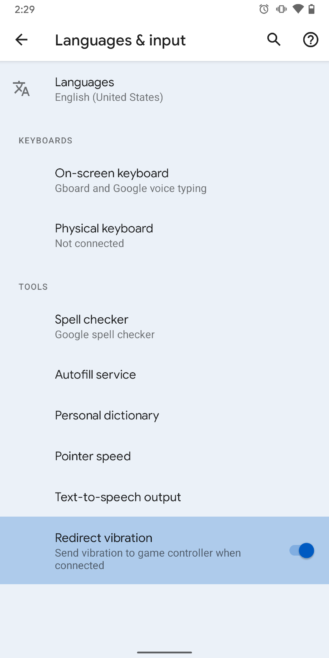 Taken together, those two features should spell a relatively easy-to-implement solution for Android developers to get working controller vibration into their games: when there's a boom or a bzzt in-game, your controller will know to vibrate, approximating console-style haptic feedback.

Tying vibration to audio cues isn't a perfect solution — it's kind of a crude workaround. But Google implies it can be used with a pretty high degree of granularity, saying the haptic-audio effects could be used to do things like "simulate rough terrain in a racing game."

Android 12's screenshot editor is getting a lot better