Together with the first Android 12 Developer Preview just earlier today, Google also published its schedule for Android 12 releases going forward. We can look forward to three total Developer Previews (or two more, counting today's), plus four Android Betas, all set to a monthly release cadence, with a final release set for some time after August.

A visual overview of the release schedule.

In order, Google plans two more developer preview releases on top of the one released today (which may be supplemented by bug-fix updates in between, as they were last year). These early releases are meant for developer feedback regarding system behavior changes and APIs.

Following the previews, we enter full Beta season. Things here will be a bit more stable, and enthusiasts can jump in and play with things more easily via the Android Beta Program. Developers can shift gears slightly to testing their apps in earnest for Android 12 compatibility as the details regarding platform changes start to be ironed out. Google plans four total Betas — presumably, again, with potential bug-fixing updates in between. Beta 4 marks Platform Stability, which means that changes for developers are basically finalized. 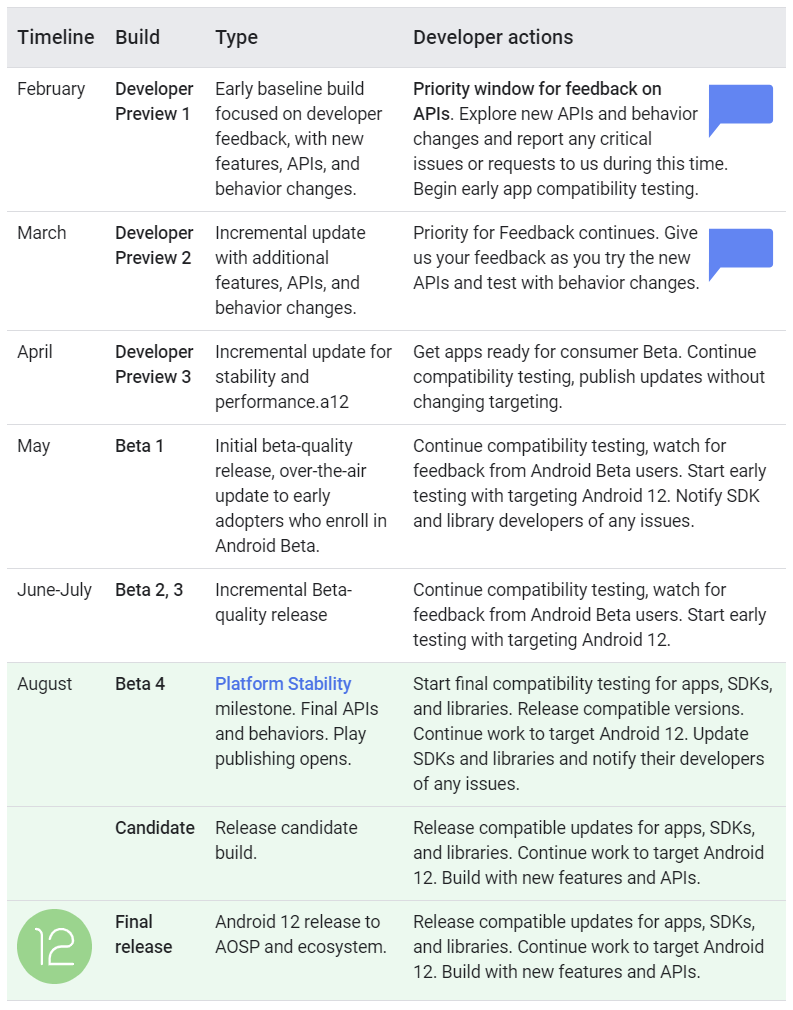 Following Beta 4, it sounds like we might get a final release candidate build, which isn't shown in the timeline image further above. We have reached out to Google to confirm that. Ultimately, the final release will be after that. Google hasn't set a date on it — usually, we get a nebulous "Q3" or something like that — but we assume it will be sometime after the Beta release in August. However, the large visual gap is different than it was in previous years. We might see Android 12 land later than expected this year.

Now, this schedule could change. Last year Google gave us an unexpected bonus developer preview, shifting the initially planned schedule slightly, likely due to pandemic-related delays. If this year is as eventful as last year was (and I sure hope it isn't) we could see things change again.

For more Android 12 coverage (there's gonna be a lot today), be sure to follow our Android 12 feature spotlight series.