Since its debut in 2017, YouTube TV has become increasingly expensive. Costing just $35/month at launch, the service will now run you almost twice that at $64.99/month. That's as much as some cable TV subscriptions — so much for "cord-cutting." YouTube TV does try to justify the cost by offering features such as cloud DVR and family sharing (plus occasional freebies), and some new perks are also coming, according to both a recent teardown and an announcement today. YouTube TV subscribers will soon get an add-on package that provides 4K streaming options, plus offline viewing and unlimited concurrent streams.

The first evidence of these changes appeared over at 9to5Google, which spotted evidence in version 5.06.2 of the YouTube TV app that's rolling out on the Play Store now (alternatively available at our sister site APK Mirror). The latest app version introduces a new notification channel called "Offline notification" that delivers “Looking for incomplete downloads” notifications, much like the notification YouTube and YT Music show in similar circumstances. A dedicated notification channel and several strings in the code suggest that this functionality will soon be available for users.

Hot on the heels of that discovery, Google outright announced the change in a blog post today, claiming that the new package won't just allow you to download content for offline enjoyment, but it will also let you enjoy 4K streaming, and open up unlimited concurrent streams. 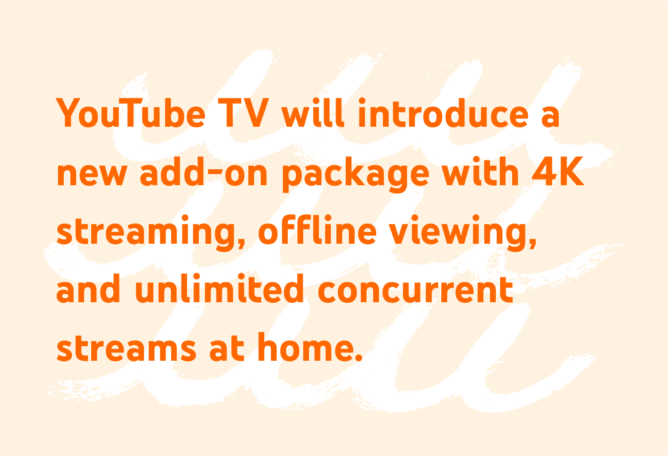 We don't know how it will manifest, and the timing for the rollout of the new package isn't clear. Restrictions may also apply based on Google's agreements with content providers, and we doubt all content currently available will have 4K options.

Function-wise, the new offline download feature might behave similarly to how it currently works on YouTube, based on the details of that teardown. There will be a download button for eligible shows and movies, and downloaded content will be available in a dedicated section within the app.

Between the details spotted in the teardown and Google's own announcement, the new package and its associated features will likely be available soon, though there isn't a clear schedule.

Here's when your phone or tablet will get Android 12