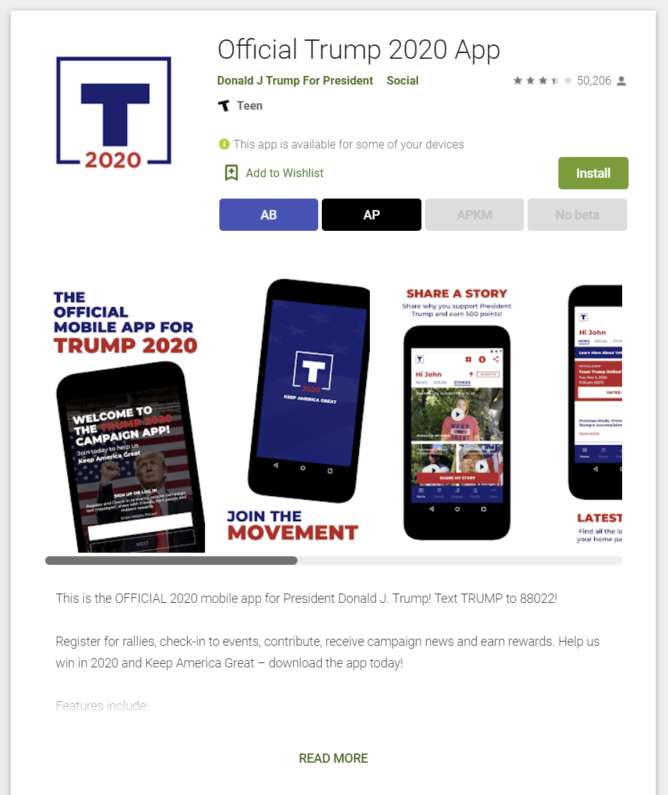 The listing as it appeared before the takedown.

At around 11:30 AM PT, Google removed the Play Store listing for the Official Trump 2020 app. A cause was not immediately apparent, but there was at least one review for the app at that time, indicating that it had ceased working correctly. We can confirm, using the app for ourselves, that it is currently unable to load content, reporting a network error or simply spinning a loading "T" circle endlessly. The precise cause of the app's dysfunction isn't clear. Screenshots of the Trump 2020 app and app listing images.

The Trump 2020 app actually dates back to 2016, where it was used in the former president's first campaign. It was refreshed for the 2020 election, with only a pair of maintenance updates in the intervening years.

The app allowed users to register for Trump rallies, check into events, contribute financially, keep up to date with campaign news, and "earn rewards."

Why was it removed?

Just after our initial coverage, Google provided us with the following statement regarding the takedown:

“The Trump 2020 campaign app recently stopped working and we reached out to the developer multiple times in an attempt to get them to address the issue. People expect that apps downloaded from Google Play provide a minimum level of functionality and our policy is to remove non-working apps from the store if they are not fixed.”

Google's developer policies do, in fact, dictate that apps require a minimum level of functionality, with examples of violating apps including those that install but don't load or are otherwise non-responsive — an issue we can verify the current version of the Trump 2020 app suffers. More often that minimum functionality requirement is held up to prevent do-nothing apps designed for no purpose, but it is also applied explicitly to "broken functionality."

We aren't aware of the cause behind the app's dysfunction that led to the Play Store removal. We have reached out to former President Trump's press office for for more information.

Last month, in the wake of an insurrection against the US Capitol, Google also banned conservative social media app Parler from the Play Store for violating Google's policies regarding content moderation. The app was reportedly used to help organize the events which occurred there on January 6th, with further claims that it incited violence in the face of an urgent public safety threat. Ultimately, five people died as a result of the violence orchestrated by insurrectionists.

Following our original coverage, Google provided a statement regarding the takedown, and we have confirmed it is in line with long-standing Play Store developer policies.

Google Maps will let you pay for parking and public transit