Android 11 finally gave us the ability to resize picture-in-picture windows, but it's an inconsistent feature that's tough to trigger in its current form. According to our friends at XDA Developers, Android 12 will introduce new methods that should be a little easier to discover and trigger, including a double-tap, pinch-to-resize, and even a "stashing" feature that hides it to one side temporarily. Android 11's bubble notifications might also pick up new animations in Android 12.

If you know just how to do it, resizing PiP windows in Android 11 isn't hard, but it's difficult to figure out your first time.

Currently, the way you resize picture-in-picture windows in Android 11 is by grabbing and pulling or pushing from either outward-facing corner of the video. If you know exactly how to do it, it's not hard to get it right, but the feature is difficult to discover on your own. Thankfully, Google is apparently working on a more intuitive method, allowing you to pinch to resize, and even double tap as you might an image or content in a browser to zoom to its maximum size — which also lets you revert it to its last resized state, according to XDA.

A "stashing" feature that temporarily moves the video partly offscreen so you can see the content behind it is also in the works, and based on current details, is triggered by dragging to the edge until 1/3 of the content is off-screen, and reverted by tapping the visible section of the video again. The "stashed" video can also be flung from one edge of the screen to the other. 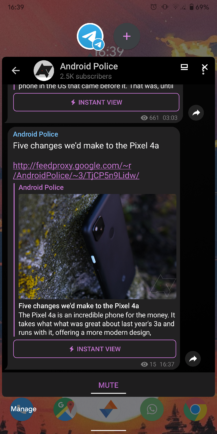 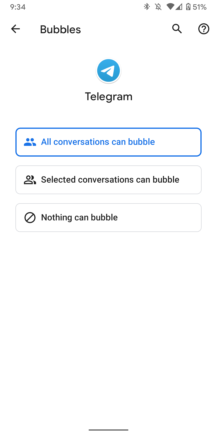 Bubbles (which are gross) in Telegram on Android 11.

On top of that, XDA has also spotted new bubble notification animations being planned, including a fading or scaling down when dragging out an expanded bubble, "softer" animations for expanding and collapsing bubbles, and similarly "softer" transitions between bubbles. In landscape, bubbles will be moved to the sides of the screen and listed vertically, rather than horizontally at the top, saving space in the center of the screen. Google's also allegedly designing some features specifically to implement bubbles in Chrome OS (presumably via the Android apps the platform can run), including flexible bubble sizing and fixed positioning, which could come in handy on a larger display.

More Android 12 UI changes are coming, including some 'Material NEXT' tweaks