Google released the Chromecast with Google TV last year, which uses a modified build of Android TV. The altered software is still compatible with all Android TV apps, but it deviated in a few important ways, including how it handles multiple users. After many people were annoyed by its absence, parental controls are coming to the Google TV platform.

Android on phones and tablets has offered robust mult-user support since the Jelly Bean days, but very little of that functionality was ever ported to the TV operating system. Android TV only has an optional restricted profile, where certain apps can be hidden using a 4-digit PIN code. The Play Store, most system settings, and even some storage folders are completely blocked in this mode. Google TV's implementation is slightly different, with limited multi-user support based on Google accounts, but secondary users still can't set their own home screen, have separate app data, or configure different streaming accounts. 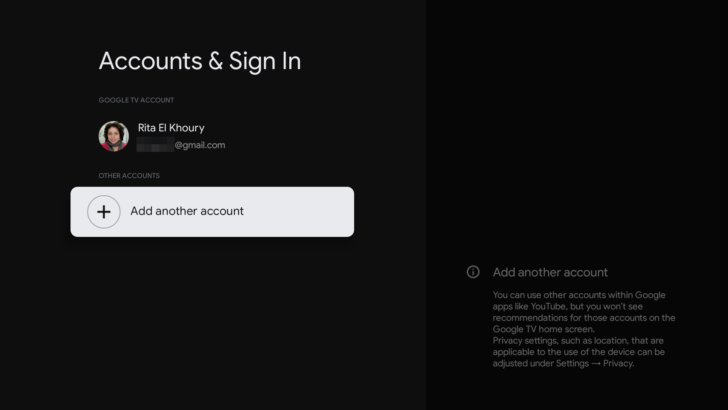 The poor multi-user support is definitely a problem on something that is usually shared across all people in a household, but Google is thankfully working on a (partial) solution. A company representative said in a support thread that Google TV will soon have 'Kid Profiles,' which sounds like Android TV's original restricted profiles:

Just wanted to post an update that Kids Profiles should be rolling out in the next month (or so). Restricted profiles are indeed deprecated in [Google TV] and replaced by the new feature "Kids Profiles", which allows you to setup a safe space for kids in google TV. During onboarding you can chose what apps to make available to kids. Youtube kids is available by default and other installed apps required parent opt-in before they are made available to the kid. Leaving the kids profile can be restricted by a PIN to prevent kids from accidentally going back to the parent account.

This still isn't true multi-user support, but it should at least address complaints from parents about children being able to access any content on Google TV. Here's hoping for a quick rollout.

Google says over 100 games will join Stadia in 2021, despite first-party studio closure

12 popular stock trading apps for Android, to get you ready for the next wave of speculative madness