We don't really think about it, but it's kind of odd that Google hasn't made a standalone version of the Assistant for PCs, isn't it? Or at least built one into Chrome. After all, Chrome OS has it now, and the Assistant is a big part of the Android experience, too (Bixby be damned). We even buy smart speakers and displays for around the house, headphones can talk to Google, and yet our desktop and laptops are ignored. But if you want to plug that gap on your own, it turns out, you can. There's an unofficial Google Assistant desktop client that's a pain in the ass to set up but way nicer than it has any right to be.

The client was made by developer Melvin L. Abraham, and you can download it from the project's GitHub. Just keep in mind, the setup process is kind of obnoxious. You'll need to register for a Google Cloud account (the free trial will suffice) and follow the thirty step setup process here. The very short version is you'll be registering your own project with Google so you can use the Assistant API in a way it probably wasn't made for. It's likely against Google's terms of use, too, and so this could stop working at any time.

While you don't need to be a developer to follow the steps (or even understand them, it's not that hard to grok), it's definitely not a simple process. But if you get it working, you'll enjoy the Assistant right from a window on your desktop.

The overall interface is actually pretty good. Based on what I can tell, it seems to be channeling a more phone-based Assistant UI — although it does kind of look like a smart display, a few things seem different to my eye. The trigger for the microphone lives on the bottom right, but you can also enter commands via a text input field on the left. Themed window controls are at top right, and settings are on the left. There's also a history, accessible via the forward/back buttons at the top left next to that, and it even has light/dark theme support buried in the settings menu. 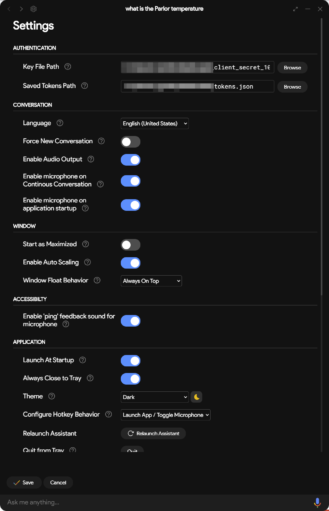 Quite a lot of settings are available.

The window is adjustable, and you can configure it to stay on top, close when it loses focus, or even automatically activate the microphone for commands when it's opened. It has a hotkey (ctrl+win+a on Windows) and even a built-in updater, all with a pretty Googly-looking design, sporting big toggles, rounded corners, and Google fonts. (A whole lot prettier than Google's only other standalone desktop product: The CPU-destroying, random-desktop-icon-flickering dumpster fire that is Backup and Sync.)

Most of the basic Assistant commands work — or, at least, worked as well as they do on other supported devices. The biggest impediment is a lack of visual controls for some queries, like if you ask about your thermostat or want to adjust your lighting. It can show images if you ask it (including from your Google Photos) and provide some visual feedback, but follow-up smart home controls are either via snippet recommendations at the bottom or nothing at all, so it's not quite as useful as an Assistant-powered smart display that can show big buttons for changing settings. Still, it's tough to complain too much when it's free. That said, plenty of commands didn't work. There's no always-listening mode, and Continued Conversation is more inconsistent than it is on other devices — though the settings menu implies the feature is supported, it only randomly seems to work and only way after you expect it to. I also couldn't trigger some third-party services like Spotify or Netflix, which makes sense. But that does mean you can't use it to play music or start streaming on other devices. Lastly, my routines also didn't work.

The unofficial Google Assistant client on macOS (above) and elementary OS (below). 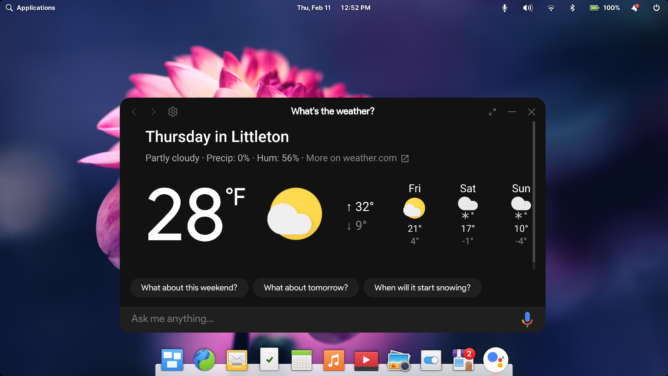 If you want to give it a shot, there are even macOS and Linux versions, though some of the settings we mentioned might vary between platforms.

While I sincerely hope our coverage doesn't bring down the Google banhammer, this app is too great not to share. Why doesn't Google make a desktop Assistant client?