The Oatmeal creator Matthew Inman isn't only famous for his humorous webcomics; he also made a name for himself as the creator of card games like Exploding Kittens and Bears vs. Babies. The former even made it to Android in the form of a mobile game, and now Inman is ready to launch another free-to-play video game: Kitty Letter, which he describes as "Scrabble combined with Clash Royale."

In contrast to Exploding Kittens, which started out as a physical game before coming to phones, Kitty Letter is first and foremost a mobile game. A story mode lets you explore a 12-part Oatmeal comic revolving around a deranged cat owner moving in next door, but there's also an Arcade mode for practice and a multiplayer option. 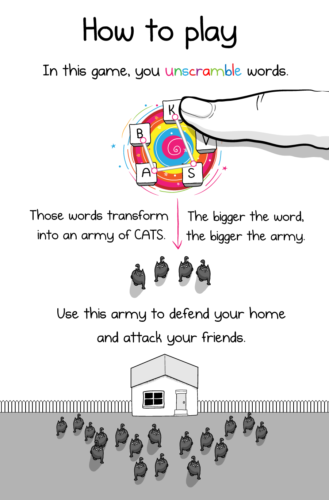 The gameplay is easily explained. You see a carousel of letters at the bottom of your screen which you have to combine to words to create armies of cats responsible for attacking your enemy or defending your home. The longer the word you come up with, the bigger your army. Your enemy, either another player or the computer, sends their own armies. Armies that start with the same letter fight against each other, and the bigger one wins, while armies that aren't stopped will successfully attack the opponent's home.

Inman says he hates "games built entirely around player retention and tricking people into keeping the app open as long as possible," and it shows: so far, the gameplay has been uninterrupted by advertisements for me, and the only in-app purchases I could find were not related to progress, instead offering skins, avatar images, and different looks for your house and cats. Inman states, "I tried to just build a short-lived, likeable game, rather than a medicore game stretched across months of free-to-play garbage mechanics. Fuck retention. Fuck in-game currencies."

To create the game, Inman teamed up with Matt Wood, a former Valve employee, after creating a crude prototype himself. Despite months of development, Inman says he doesn't expect all bugs to be squashed, so he's asking players to bear with his team as it rolls out updates. For what it's worth, I haven't run into any problems while playing so far.

You can download Kitty Letter from the Play Store, and you can read more about the journey to the creation of the game on The Oatmeal. Google is testing dark mode for Search on the web, yet again