Late last year Google introduced News Showcase, an initiative aiming to highlight insightful feature stories and bring them to the attention of more readers. Google even announced subsidizing access to select paywalled pieces through the program. Following an initial rollout in Germany and Brazil, Google brought News Showcase to Australia last week — and now the company has announced it's coming to even more countries.

Described by Google as "a product where we support and pay publishers to curate their journalism just for you," News Showcase starts arriving today for readers in the U.K. and Argentina. 120 publishers are participating in the U.K., with names like The Financial Times, The Telegraph, and Reuters included. Over in Argentina, 40 news publications are on board, including the two largest newspapers in the country.

Readers in these nations will soon be able to access News Showcase panels curated by news editors and shown to them by Google's AI smarts. Today's launch also includes access to select paywall content, giving users the opportunity to read more of a publication's content than they would otherwise. 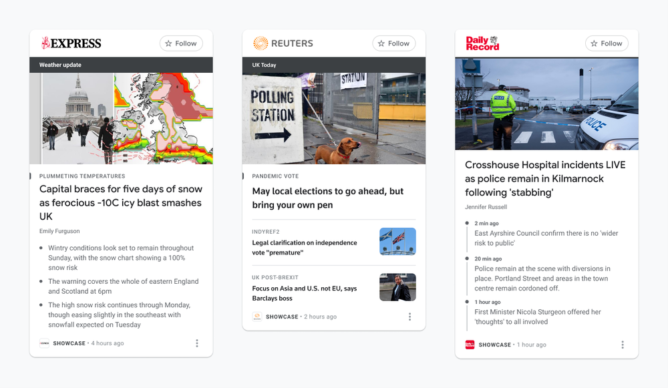 An example of how different News Showcase panels may appear in the U.K.

Google says that the panels are already appearing in Google News on Android, iOS, and the mobile web, along with showing up in the Discover feed on iOS. The company plans to surface them in other versions of these products in the coming months — as well as launch the product in new countries.