Samsung's hard at work in bringing One UI 3 to its smartphone lineup and only recently pushed the update to the Galaxy S10 series. Unfortunately, the company ran into some camera and overheating problems with the Android 11-based firmware and had to pull the update temporarily. It looks like these issues should be a thing of the past. Samsung first started distributing the update to Verizon, as covered by SamMobile, and now, the update is rolling out to AT&T and T-Mobile, too. 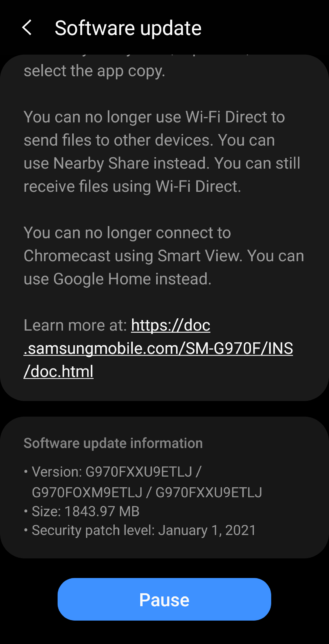 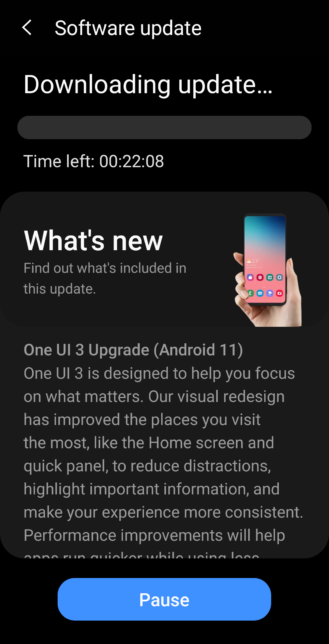 The new firmware is rolling out as version G975FXXU9EUA4. It looks like Switzerland and US customers on Verizon were among the first to receive it, but now the update is spreading to AT&T and T-Mobile, as well. It weighs roughly 2.2GB, so be sure your Wi-Fi is turned on when you download it.

If you want to update to the new Android 11 build asap, you could try using Samsung's Smart Switch PC app. There's no guarantee it'll work, but if you're impatient to get Android 11 with a functional camera and no thermal issues, it's worth a try.

The original Android 11 update started rolling out to the Galaxy S10e and S10 5G in Switzerland and, a little later, India, weighing in at around 1.8GB and coming with the January security patch. With the bugs now fixed, it's likely only a matter of time until we see a wider rollout internationally.

So far, Samsung has done a good job rolling out One UI 3.0 to its devices, and this is the biggest problem with the Android 11 update we've heard of. With it now back on track, Samsung is still beating most of its competition to the punch, as well as improving on last year's Android 10 timetable.

Article updated to reflect that Samsung is resuming the Android 11 rollout.

Updated to include details on AT&T and T-Mobile rollout.

Richard Gao contributed to this article.