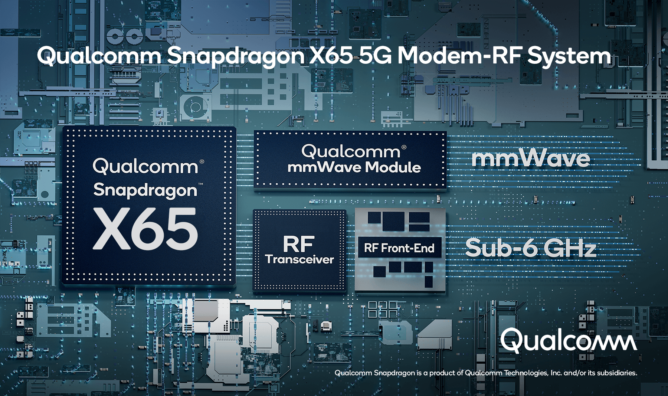 I know, new chips always have lofty market-heavy promises, and that could be the same here, but this upgradeability is still notable, especially as we're in a transitionary, early adopter period where 5G is still rolling out. Network standards are changing, and new spectrum is being freed up for their use. But the new pair of modems already promise support for the new 3GPP Release 16 features, which you can sort of think of as the second big wave of 5G standards. (Very importantly, the standard allows for carriers to use unlicensed spectrum for 5G — more on that later.)

Remember the early LTE days when standards were constantly changing, and new phones felt like they were left behind when it came to carrier rollouts of features almost instantly? We're already seeing it happen with things like standalone mode and the reshuffling of frequencies for 5G. That's always going to be a problem given the carriers, the process of establishing standards, and the lag to develop hardware. But by rolling out these big changes via software updates, this hardware can be ahead of the curve for longer — and that should also mean it takes longer to fall behind. That early adopter tax of frequent upgrades won't apply as much.

It could be a hollow-marketing heavy promise, but I'd like to hope it makes a difference in phone longevity during this early 5G era.

On top of that, we can expect the other usual speed improvements. The X65 hits a theoretical maximum of 10-gigabit speeds, while the smaller X62 hits "just" 4.4. Of course, these are lab-grade numbers you won't see bouncing around town, but it should translate to improved general performance anyway. According to Sascha Segan, the X65 can apparently aggregate ten 100MHz mmWave channels, plus an extra 300Mhz via four sub-6 channels. That's a whole hell of a lot of spectrum to harness all at once, and it's also able to use things like those new C-band frequencies that were just auctioned off, and even unlicensed spectrum like Wi-Fi 6E. All of it can all be haphazardly mixed and matched to eke out every bit of speed available. Importantly, it also means it's more likely to support the 5G frequencies carriers will be using next year, and the year after that, not just today.

Qualcomm also claims the two new modems are the first to use AI to tune their RF systems, which can mean benefits from faster speeds to less interference from your grip. They'll also support the new n259 mmWave band (via a new antenna module). Qualcomm sells complete RF solutions for customers (read: phone manufacturers) that don't want to deal with the hassle of their own amplifiers or antennas, and there's a new end-to-end solution for the X65 and x62 as well.

We don't know which Snapdragon chips either of these modems will end up in yet. If Qualcomm follows its usual plans, the X65 will likely end up in the next 800-series flagship and the Galaxy S22, but it could also manifest sooner than that. Segan speculates that the timing could indicate an appearance in the next round of iPhones, and I tend to trust his opinion on the subject. Although Qualcomm states that the slightly slower X62 targets things like hotspots and home internet, it could also manifest in a lower-end Qualcomm chip, as last year's X52 did in the 750G. We'll just have to wait and see.