Mobvoi makes a bunch of earbuds under the TicPods banner, but the Earbuds Gesture are probably the company's most unique (and not just because of the name): you can take or decline calls by moving your head. They also have ANC and solid battery life, so there's a lot going on for just $70 ($20 off).

When a call comes in, the Gesture let you either nod your head (like you're saying yes) to pick up, or shake your head twice (like "no") to decline. It's a pretty niche feature, but if your job sees you both getting dirty hands and taking lots of calls or if you have limited mobility, it could be game-changing for you. It's also just cool and futuristic in an over-engineered, Iron Man sort of way. 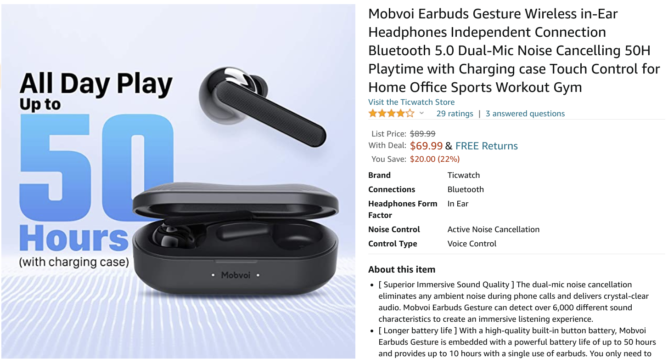 Even if you're not enticed by the gesture controls, they're pretty great earbuds all around. They've got ANC and either bud can be used on its own, and Mobvoi says their battery will last 10 hours on a single charge (although that's presumably with noise cancellation turned off). Follow the link below to check them out and grab a pair.