Historically, Xiaomi has been a consistent contender to launch the first phones with next-generation Qualcomm silicon. It took the lead again by announcing its Mi 11 series of phones complete with the Snapdragon 888 in China last year. With that new engine comes a cavalry of other upgrades, and now, the phone is also available in international markets.

While some goodies sprout from the Snapdragon 888 such as Wi-Fi 6, better 5G, and more powerful AI processing, others are around to augment its abilities — faster memory in the form of UFS 3.1 storage and LPDDR5 dual-channel RAM and some liquid cooling infrastructure.

The giant pumpkin weighing contest of the smartphone industry seems to be in the display department and Xiaomi has contributed its webpage inches to a lot of boasting: 10-bit AMOLED display with refresh rate of up to 120Hz, touch sampling up to 480Hz, maximum brightness of 1,500 nits, contrast measured at 5 million to one, and an A+ rating from DisplayMate. It's big at 6.81" across, but tall with a 20:9 aspect ratio, and topped off with this year's Gorilla Glass Victus from Corning. The screen is accompanied by stereo speakers with Harman Kardon branding. You can also stream audio to two Bluetooth devices at once, making it easy to watch movies or listen to music with a friend or your significant other. There's another gimmick on board: The in-display fingerprint sensor also has an integrated heart rate sensor. Another spec fight, this one particularly attuned to Chinese OEMs, is with power. The company has decided to go with 55W wired charging and 50W wireless charging — this guarantees a zero-to-full pump cycle in 53 minutes or less — with 10W reverse charging via Qi. Through USB-C, the Mi 11 supports Power Delivery as well as Qualcomm's proprietary Quick Charge 4.

For this phone, Xiaomi is more or less sticking with the Mi 10's camera combination which includes Samsung's top-end HMX 108MP sensor (though at a very slightly slower aperture), a 13MP wide-angle camera, and a macro camera rated at 5MP. 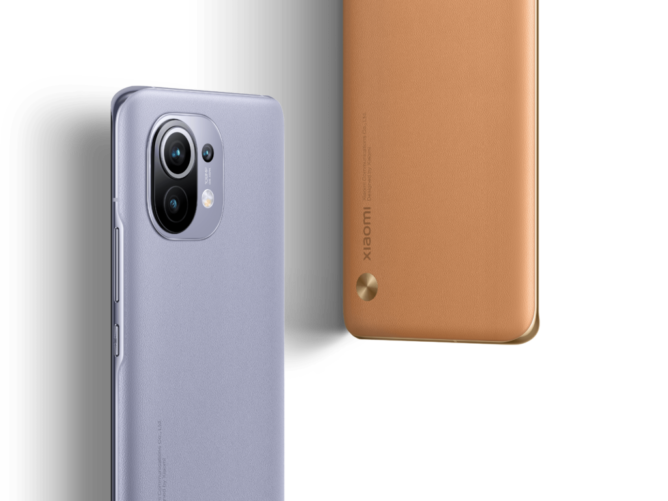 As part of the international launch, Xiaomi has also announced the forthcoming MIUI 12.5 launch. The new version of the Android skin comes with a redesigned, less CPU-taxing UI that allows for a longer battery life and smoother animations. The update will also allow you to uninstall most system apps, save for a small number of critical applications. MIUI 12.5 will roll out to first phones in Q1 2021, starting with the Mi 11, Mi 10T, Mi 10T Pro, Mi 10, and Mi 10 Pro.

The Mi 11 comes in three glass finishes and two cut from vegan leather — far away from the days of the Moto X with its vegetable-tanned Horween leather, but maybe we and the animals we derive the material from are better off for it. Speaking of conservation, the company will only be supplying chargers to customers who purchase the phone with a separate accessories bundle (free of charge right now, but an extra ~$15 for later purchases), but they will at least be compact and sleek gallium nitride wall warts.

The base model with 8GB of RAM and 128GB of storage starts at 3,999 yuan (~$612) with the 12/256GB config going for 4,699 yuan (~$719). In Europe, the phone will only come with a glass back and 8GB of RAM, starting at €749 for the base model and €799 for the 8GB/256GB version, available starting late February. International customers will get their hands on an included 55W GaN charger, and they're eligible for a free screen repair within the first 12 months of owning the device. The phone will be available for purchase via Xiaomi's official sales channels. Details on exact launch markets are forthcoming.

Updated with details on the international launch.

Weekend poll: Should Google notify customers when an extension or app changes hands?

Xiaomi will let you uninstall system apps in MIUI 12.5 — here's when it will come to your phone