The OnePlus 8 Pro delivered some significant camera improvements but it still failed to impress us on several fronts. Vivo’s recent collaboration with Zeiss to co-develop imaging systems gave us reason to believe a similar deal could be in the offing for its sister brand, but it seems OnePlus has plans of its own. It's looking like a collaboration with industry giant Hasselblad is on the cards for the upcoming OnePlus 9 Pro.

YouTuber Dave Lee was able to source some hands-on images of an alleged OnePlus 9 Pro that show off its new quad-cam layout. That’s one more sensor than the standard OnePlus 9 is expected to have, though we don’t know what each one does yet. What’s striking is the Hasselblad branding, which we don’t usually see in the smartphone world, aside from a short-lived Moto Mod.

These labels themselves don’t necessarily mean much unless the camera hardware and software are tuned to produce better photos. But the Hasselblad brand could add a bit of credibility to OnePlus’ recently announced efforts to improve its lacking camera performance.

The camera app indicates that the 9 Pro can zoom up to 3.3x (up from 3x on the previous model), but it wasn’t clear if it’s optical or software-based. There’s also a tilt-shift photography mode, which was first tipped for the OnePlus 9 series in a separate leak last month. In addition to all the camera stuff, the 9 Pro is said to support a 120Hz refresh rate at QHD resolution and 11GB of RAM with 256GB of storage. That unusual RAM size could be a mistaken reading on a test version of the OS as 8GB and 12GB have for years been the standard options on OnePlus phones. 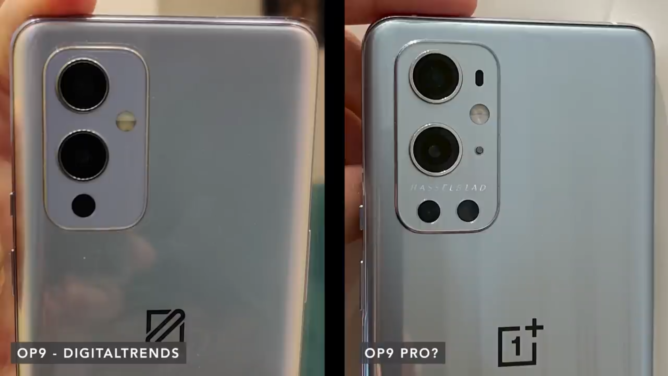 Adding weight to this leak is that these OnePlus 9 Pro images have an uncanny resemblance to a OnePlus 9 leak. The smaller model in those hands-on shots lacked the Hasselblad branding, which could possibly mean OnePlus could limit the camera improvements to the Pro model, or it could just be that it was an earlier prototype. We'll learn more when the phones go official sometime in the next few months.