There’s no denying that the Galaxy S21 series took some heavy inspiration from current Note handsets — both in form and function. Unlike last year, there’s a starker divide between the three Galaxy S21 models, and it shows. The questionable choices Samsung has made this time around result in the S21 phones feeling even worse than the outgoing S20 in some cases — and that can’t be stressed enough for the two cheaper options. Among these downgrades, there are a few that are just too glaring to pass over.

Frankly, we saw this coming a mile away when Apple took the plunge and ditched the standard in-box charger with its most recent iPhones. For the new Galaxy S21 series, all Samsung gives you is a USB-C cable, leaving you with the option to either reuse an adapter you already own or buy a new one. Even though it's going to be an additional purchase, at least with Samsung we're not also dealing with the headache of a proprietary charging port.

As for the charging tech itself, the S21 Ultra has dropped its support for faster 45W charging and settles for the same modest 25W speed of the S21 and S21+. With last year’s S20 Ultra, you could optionally pick up a 45W adapter separately, but honestly even the included 25W brick turned out to be quite capable back then.

The ideal resolution for a phone's display has for long been a polarizing subject, and it's getting more intense here with Samsung’s decision to swap QHD panels for FHD ones on the S21 and S21+. The company's flagships (including the S21 Ultra) default to 1080p anyway, and none of them (except the latest Ultra) can handle high refresh rates at their peak QHD resolutions — making a strong case for the lower FHD resolution.

Displays have long been a marquee feature on Samsung phones, so this lower resolution on its newest flagships could kickstart a disturbing new trend — one where we’ll see the lines between budget flagships and real flagships getting increasingly blurred.

Samsung likely realized that its call to make 12GB the baseline RAM size for its entire Galaxy S20 line was a bit overkill, and has since backtracked to cap it at 8GB this time around. Once again, the S21 Ultra gets preferred treatment and is able to keep its more spacious 12GB and 16GB options, with this change only applying to the two cheaper models.

While a big drop on paper, the lower RAM capacity should probably still be adequate, considering international S20 models defaulted to 8GB without any noticeable bottlenecking — our in-depth review of the S21 and S21+ should give you a more complete picture. 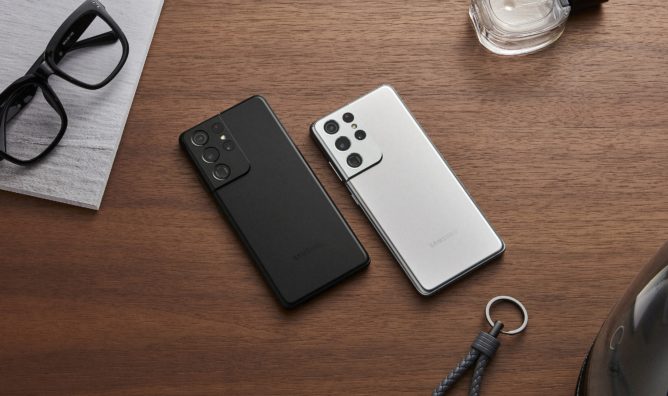 Okay, so plastic backs are another polarizing topic even for us here at Android Police, possibly even more than 1080p displays. While we actually liked the implementation on the standard Note20, it still felt like Samsung was just pinching pennies on its $1000, supposedly premium phone. Taking a page out of its own book, Samsung has slapped a plastic back onto the non-Plus S21, while the other two models still use glass. At least the frame is still carved out of metal, so durability hasn’t taken a hit.

Whether or not you prefer a plastic back (Samsung uses a pretty high quality one, for what it's worth) could be very subjective, but what the switch says for sure is that the Galaxy S21 is now one step closer to the S20 FE.

No storage expansion nor MST

Apart from all those big-ticket changes, Samsung has also sneakily excluded the microSD card slot from the entire S21 line. Galaxy phones had so far been among the last few flagships that still let you pop in a card to add even a terabyte of additional storage — but not anymore. With all these new phones you're limited to just their built-in storage: for the S21 and S21+, means 128GB and 256GB options, while the Ultra lets you pick between 256GB and 512GB.

Samsung has also dropped MST, which helped define Samsung Pay by supporting existing payment terminals that lacked explicit NFC support by emulating the magnetic stripe on a physical credit card. With the growing ubiquity of NFC-equipped payment infrastructure, that threatens to leave MST obsolete. However, this change doesn't apply to all markets, and some international S21 models still hold on to MST functionality.

Separately, we learned that the base S21 doesn’t support UWB for future applications like Digital Key, whereas the other two phones do. While probably not that big a deal, it does make the cheapest Galaxy S model feel like a second-class citizen in Samsung's 2021 top-tier lineup.

Many of you must be willing to point out that these so-called downgrades don’t really matter that much when you consider the lower entry price and all the other new features we do get this year — I hear you loud and clear. While it’s true that these regressions do, in fact, have a part to play in bringing that price down, some of them come across as Samsung’s way of forcing its will on the buyers, as Apple is similarly criticized for. With these choices, Samsung is either taking away the options you already had or is pushing you to upgrade to the Ultra.

How to sideload any APK on the Chromecast with Google TV