After buying an iPad Air a couple of months ago, I was curious about the Google services experience on iOS. Over the previous years, I've frequently heard about features that roll out to Google's apps on its rival platform before making it to its own OS, so I wanted to dig into the biggest Google apps and services to see if they offered anything new on iOS that we haven't seen on Android. My investigation turned up several examples, seven of which are quite significant, plus a few other less substantial ones.

We've heard about Chrome's upcoming Read Later-like feature for a year, but we've yet to see it roll out to everyone. It has just now popped up in the Canary release of Chrome on Android, so it'll take several weeks to reach the stable version. In the meantime, Google suggests you use the page download function to replace it.

However, the reading list is already live on iOS and has been for many months. Thanks to it, you can add any open page to your list or tap and hold on any hyperlink in a site to save the linked page for later. 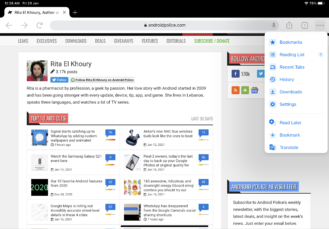 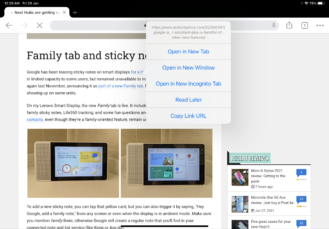 The functionality is limited with only the option to mark pages as read or delete them from your list, but it's the simplified offline reading mode that makes this all worth it. 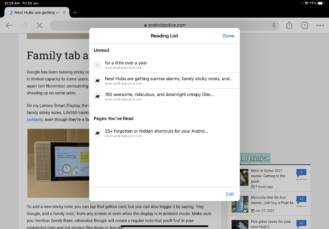 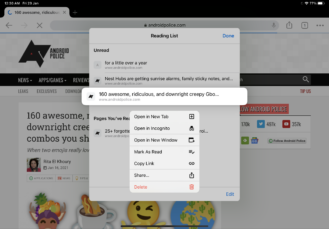 Once a page is saved, it's accessible online and offline, and everything superfluous is stripped out, leaving just the main content of the article with only the text and images. It's perfect for saving a few articles to read and enjoy when you're away from a connection. 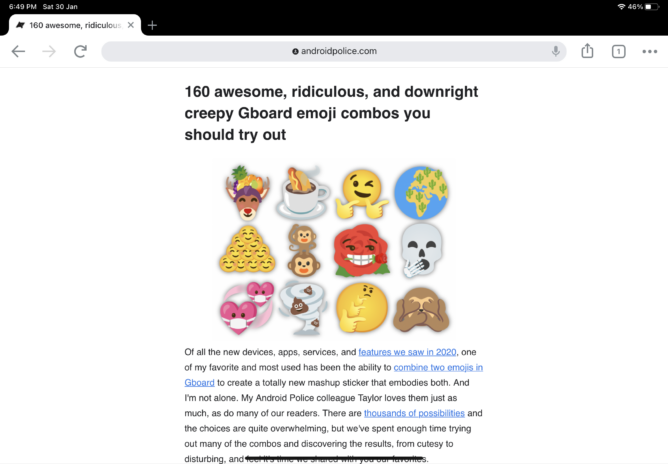 Many Google apps on Android let you swipe up or down on your avatar image (top right) to switch between different logged-in accounts. We really love the feature, which is also available on iOS, though with one extra sprinkle on top.

If you tap and hold the avatar instead of swiping, you toggle on incognito mode, so you can use the app without any of the activity being tracked or associated with your account. This works in both the main Google app and Google Maps on iOS.

In general, Gboard is miles ahead on Android compared to iOS: It's smoother, offers a handy clipboard manager and those awesome emoji combos that we love so much, among other extras. But there are two unique features that you can only find on Gboard for iOS now. The first is Dot shortcuts, a way to quickly insert preset emojis, GIFs, and stickers by simply typing a dot (period) followed by a keyword. 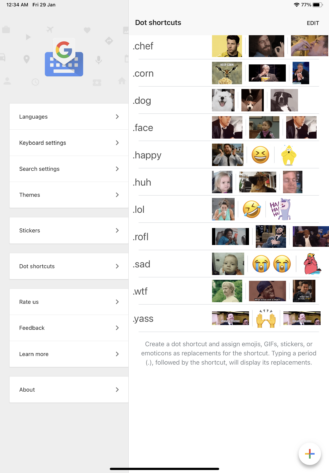 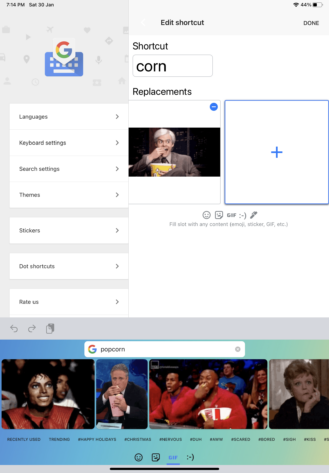 You can set as many keywords as you want, but they're limited to six characters in length (this is why my popcorn keyword is 'corn'), then search and select three suggestions, which can be mixed and matched among emojis, stickers, and GIFs. Given how clumsy it is to insert these on iOS, the dot shortcuts are very welcome on the platform, but they'd be very handy on Android as well. 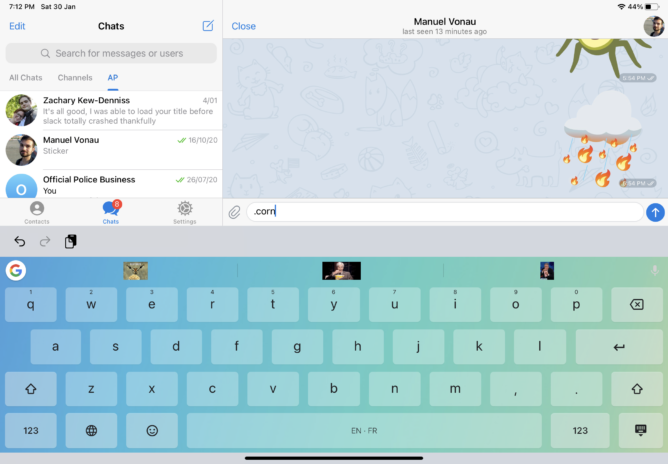 The second Gboard feature that you can only find on iOS is the ability to customize any theme to your liking, down to the tiniest of details. You have to tap the pen (edit) icon on the bottom right of any theme you choose and you'll be taken to a new page with all the settings you could imagine: background transparency, text and background colors on regular and non-text keys, borders around each of these, pop-up text and background color, and even swipe trail color and length. 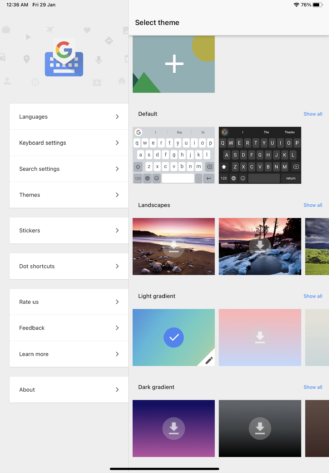 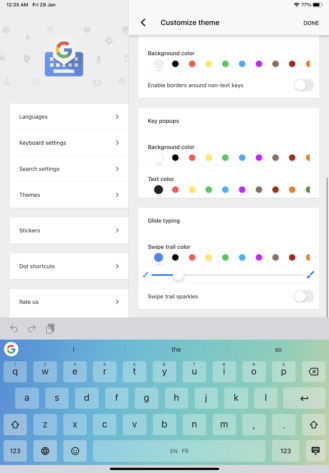 This lets you really personalize the keyboard's look to your liking, going from something extra dark suited for night usage (or vampires) to something as funky as whatever this blue, green, yellow, and red retina-searing mix is. 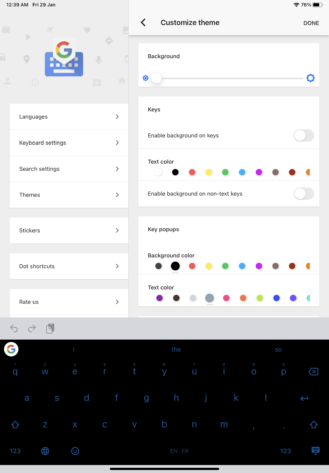 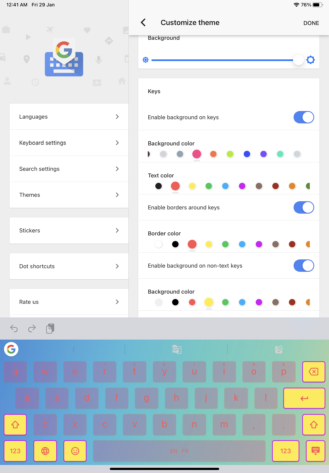 It still baffles me that Google doesn't let you set up a biometric lock for many of its sensitive apps on Android. It does, however, offer that for Drive on iOS. The feature is called Privacy Screen and can be enabled when you switch away from Drive, either immediately, after 10 seconds, 1 minute, or 10 minutes. Whenever you try to get back to Drive after the preset timeout, you'll have to unlock it with Touch ID or your pin. This is a great security tool to keep anyone you don't trust away from your sensitive documents. 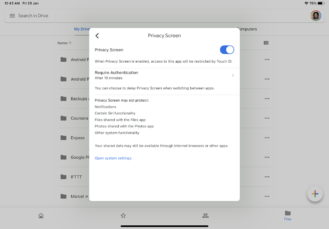 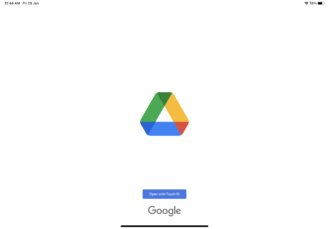 Besides Drive, you can also lock the Google app behind Touch ID, but only for incognito mode tabs after 15 minutes of inactivity. That makes a lot of sense. If you've started a search in incognito, you likely don't want it to be tracked back to you, whether by Google's algorithms or people who might have physical access to your device. After you've switched away from this for 15 minutes, you either forgot about it or got side-tracked, so it's only handy to see it locked and requiring your biometric authentication to show its content.

It might also save you from seeing some sensitive content if you open the app when there are people nearby, and you've been inactive for a while and you'd forgotten what you were doing on it the last time. 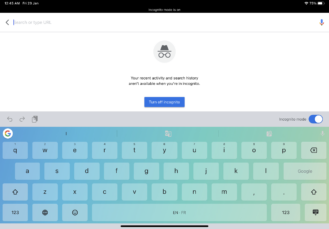 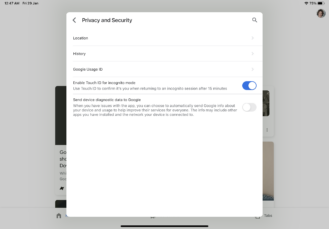 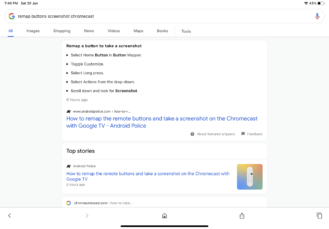 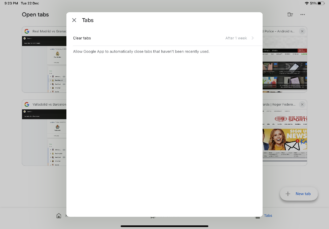 Switching between running searches and articles is as simple as selecting that thumbnail, and you can set open tabs to be automatically closed after one day, week, or month. 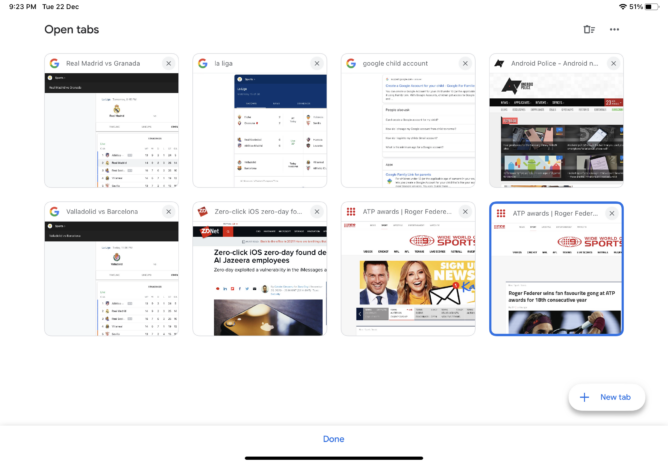 It's possible to open two side-by-side windows on Chrome for Android, but you have to enable multi-window first then tap and hold any link on the current open page to open it in the second window. It's quite hidden and not very straightforward — I've been digging into Chrome's features for years and only learned about this a few weeks ago.

On iOS, the process is much more straightforward. You can tap and hold any link to open it in a new window, without having to trigger the multi-window mode first, or you can use iOS's gestures. Easy peasy. 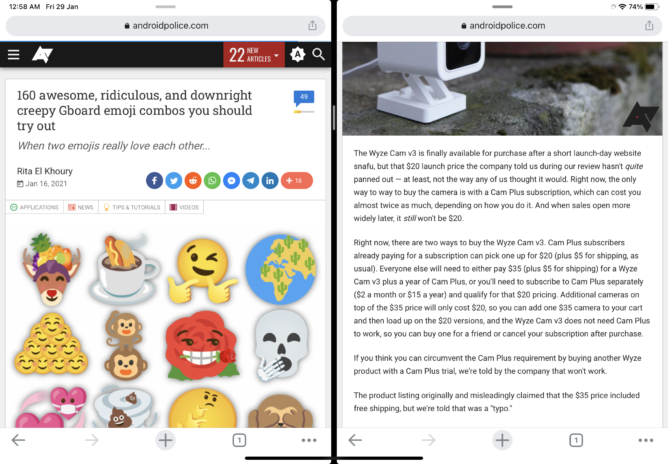 Chrome recent tabs in the switcher

Another minor Chrome improvement on iOS is the handy tab switcher that lets you move between open tabs on your current device, but also consult a list of your recently closed tabs and every tab you've kept open on other devices. These features are all available on Android, but they're not as easily accessible as they are on iOS through the tab switcher. 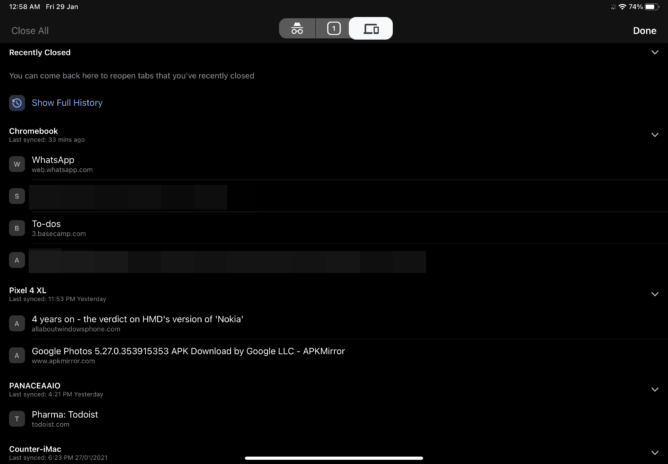 On iOS, Gmail lets you customize your snooze settings inside the app, thus saving you from having to open the web interface to change those. Minor, but why not add it to Android too? 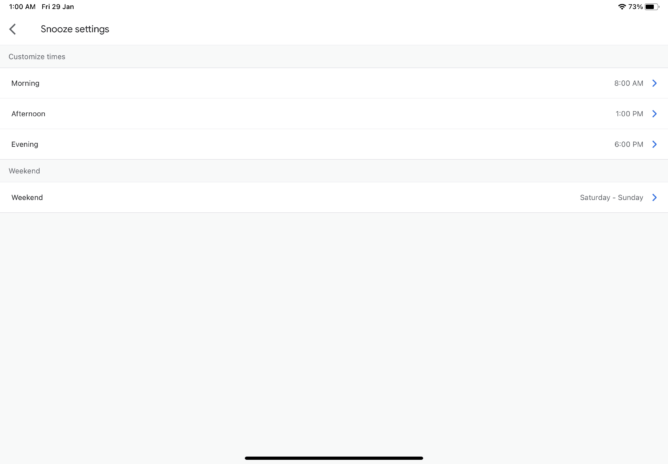 I love Google Calendar's cute illustrations for events, but they may not be to everyone's liking. If you prefer to keep your calendar serious and functional, you can disable month and event illustrations on the Calendar app on iOS through two toggles that are nowhere to be found on Android. 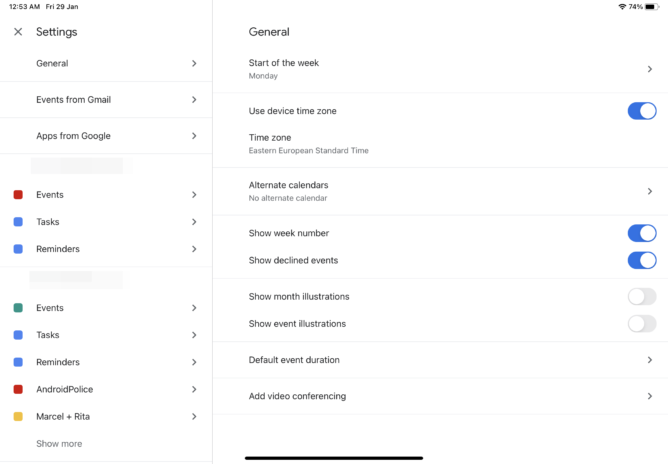 And just like that, your calendar becomes bland again with only calendar colors punctuating the schedule. 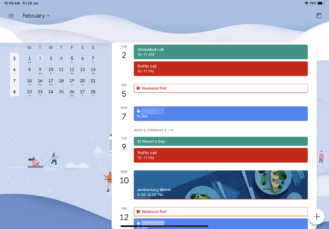 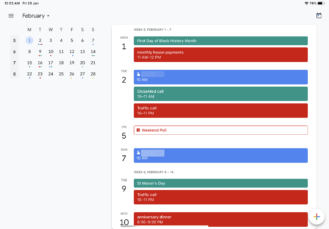 Search tools were added to the Google app on Android last year then mysteriously disappeared, never to be seen again. They're available on iOS, though, letting you restrict your search results by date (any time, past hour, 24 hours, week, month, or year). It's confusing to find these filters on the web (desktop and mobile) and in the iOS app, but not the Android one. 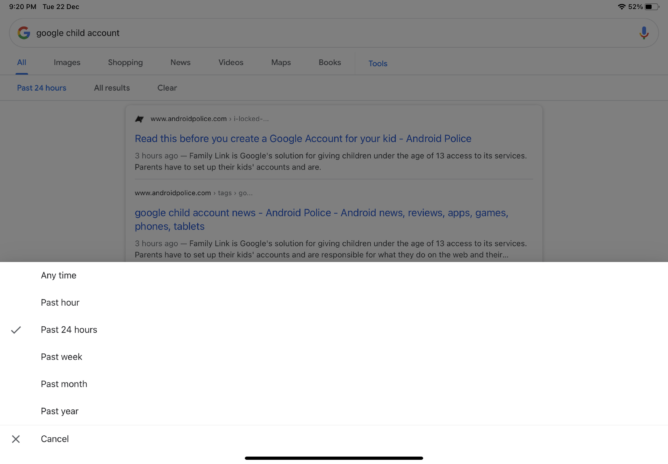 Google is still offering the deprecated Today Extensions (iOS 13 and earlier) for some of its apps on iOS. Although these aren't official "widgets" yet, they offer a lot of functionality that could've easily been implemented as an Android widget. Sadly, we don't get any of these on our favorite platform.

Among the most interesting options are some quick actions for Chrome (including QR scanning), suggested sites that you visit often, and a smorgasbord of interesting Maps widgets for local traffic, transit departures near you, travel times to your home or work, and suggested actions of Local Guides. All of these would be welcome on Android.

Many Google apps offer feature parity across Android and iOS, but some (like Chrome or Assistant) remain more powerful on Android. It's curious, though, to see that the opposite is true in a few cases, and that Google's iOS teams are rolling out some features to Apple's platform before offering them on Android. Sure, none of these are crucial, but several are quite cool and useful, and would be more than welcome additions to our mobile experience.

5 ways the Galaxy S21 series is better than the S20

10 new and notable Android apps and live wallpapers from the last two weeks including Niagara ...