Xiaomi is known for its affordable but powerful handsets, but the company also loves to push the boundaries of what's possible with its concept phones. It introduced the Mi Mix Alpha in 2019 with a wrap-around screen, only interrupted by a small strip with the camera. And today, the company is back with another interesting concept sporting a quad-curved waterfall display — i.e., tons of space for accidental touch input. 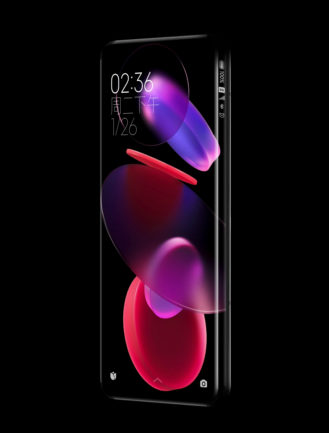 The new Xiaomi concept looks like the natural next step following Huawei's commercial P40 Series, which also sports a quad-curved display. Xiaomi's curves are much more pronounced, though. The company calls its new panel an "88° hyper quad-curved screen design." The display curves over all four sides of the screen, though the corners are left out, which has already attracted some mocking on Twitter.

The unique design allows some interface elements to curve over the edge of the screen — for example, the announcement video shows how the status bar is moved off to the side on the lock screen. The volume can be adjusted by sliding a finger across the left edge of the screen, and there are pressure sensitive areas to emulate buttons. That's right, the screen takes up so much space that there isn't any left for ports or buttons, making the phone nothing but a slab of glass. The device is charged wirelessly, only supports eSIMs, and has "third-generation under-display cameras." A "flexible film display acoustic technology" is responsible for audio.

The concept looks impressive, but there are still some questions regarding durability and usability. So far, button-less designs have mostly only ever been concepts due to a lack of practicability, though the company proved that phones like these can indeed be sold and used. And curved screens are already dividing smartphone fans when they only curve over the sides, with many complaining about accidental touches.

While we only got to see renders in Xiaomi's announcement, the company insists in a statement to The Verge that the handset exists and that employees have already used it themselves. There is no word on exact hardware specification or commercial availability just yet, and this being a concept phone, there might never be.

TikTok is now available for Android TV in the UK, Germany, and France (APK Download)