Google is starting to back down on its threat to leave the Australian market. In a blog post today, the company extended an olive branch, highlighting Australian publishers that would be joining the News Showcase program, which pays publishers as part of a licensing program to refer traffic to their stories.

In case you missed the context, Previously Google threatened to pull Search out of the Australian market in response to new legislation requiring that referral sources like Google and Facebook pay organizations when include contextual references (i.e., snippets as in search results or most news carousels) when they share their content, which would easily be considered fair use in most locations. Ostensibly meant to fight a perceived "imbalance" in the relationship between news platforms and referral sources like Search, the law gives publishers the ability to double-dip, making money not just from ad revenue driven by that referral traffic, but from the mere fact of being linked by Google in Search or other products. Of course, publishers were all pretty happy about it, and for obvious reasons, Google wasn't.

It remains to be seen how things will pan out for other businesses, but Google has elected to enter into private agreements with "a growing number of Australian publishers" — including The Canberra Times, The Illawarra Mercury, The Saturday Paper, Crikey, The New Daily, InDaily, and The Conversation — to appear in the Google News Showcase. According to the blog post, this Showcase includes a licensing program for content across Google services (presumably, that includes Search), and so this could functionally address the problem posed by the new law, though more publishers will need to participate. 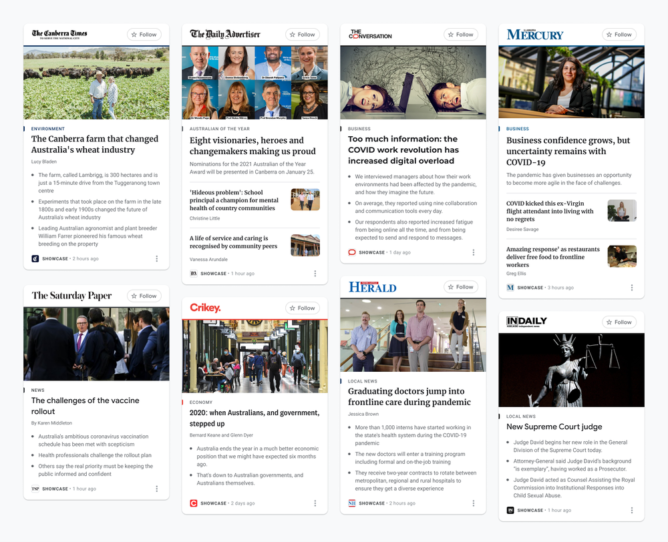 In addition to licensing, Google is also going to pass publishers analytics, helping them to better target readers and understand the flow of topics and trends over time.

This isn't the first time Google's paid to feature news. Last year it started a licensing program meant at least partly to address an EU law change, and some Australian publishers were already on board at that time. That program even allows for Google to pay for paywalled articles on readers' behalfs to promote their content. Google also has a "subscribe with Google" program that many big publications participate in, including The Washington Post and Financial Times.

This deal doesn't mean Google is paying every single Australian publication yet, and it may not fully solve the problem or bring it up to compliance with the law, but it does mean the company is willing to further discuss licensing arrangements ahead of more aggressive enforcement, including forced arbitration, and many outlets are already on board. Microsoft's disappointment must be palpable.