The popular Chrome extension The Great Suspender has been itself suspended from Google's Chrome Web Store. The extension is also being remotely disabled on customer's devices, with a warning that it is "dangerous" and "may contain malware." Reportedly, this is because of some sketchy changes that happened when the extension traded hands last year, including tracking code discovered in the extension.

For those who are unfamiliar, The Great Suspender was an open-source Chrome extension that automatically suspends open tabs that haven't been used for a while. It was quite popular among those trying to trim down Chrome's memory footprint, especially for RAM-limited Chromebooks or older and slower computers. In short, it had a whole lot of fans.

We can't confirm the reason for the takedown, but it's curious. The extension was open source, and nothing at the project's GitHub indicates changes in the last few months. However, the project changed hands back in early January, and the new developers have reportedly been engaging in some suspicious behavior with a few changes made to the app in October. Notably, the last few releases to the Chrome Web Store contained changes not published to the project's GitHub, including some tracking analytics and sketchy scripts.

On Reddit, it is alleged that the extension "contains tracking code that could try and grab your passwords." Though we have yet to find an official source to explicitly confirm that, those changes sound like they could possibly be used for it. In either case, Google is explicitly warning users that it contains malware in a message that appears alongside the notification that the extension has been disabled. 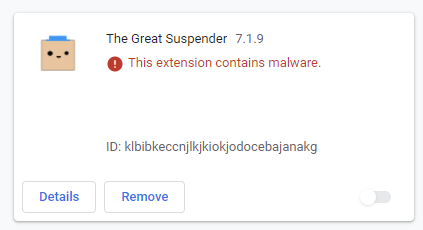 If you're among those trying to recover your suspended tabs now that the extension is disabled, a quick search of your history for the nonsensical word "klbibkeccnjlkjkiokjodocebajanakg" (the extension's ID) should pull them up for recovery.