Over the last few weeks, GameStop stock (GME) has seen its price spike tremendously due to meme-driven retail trading from venues like the subreddit /r/WallStreetBets, prompting some services like Robinhood to halt trading for it and other Reddit-promoted stocks. This heavy-handed action by the company has resulted in a clear reaction from users, with the Robinhood app's rating at the Play Store tanking to 1.0 stars, the lowest possible score, and prompting a class action suit.

Robinhood's Play Store desktop listing — note the single lonely star in the rating to the right.

There's a whole lot that can be said about the current state of the stock market. Proponents of the recent stock spikes claim there's nothing wrong with people coordinating in large numbers to buy specific stocks, and, to be fair, that's literally how the market works. One need only tune in to most financial news sites or TV shows, which use their reach to promote specific stocks as "buys," "holds," and "sells," to come to that conclusion. However, these coordinated actions have resulted in institutional short-sellers losing literally billions of dollars. Institutional traders claim these spikes equate to a massively coordinated pump-and-dump scheme, while many retail investors believe that these restrictions on tradings are merely protectionism for hedge funds that stand to lose money from what they consider fair public trading. 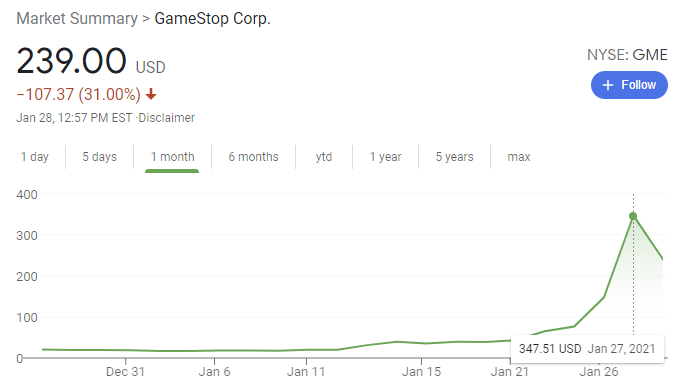 GME's chart for the last month at the time of writing.

Gamestop stock (GME) spiked at nearly $500 earlier today, up from under $20 around a month ago, though it has since fallen to $239 at the time of writing now that many venues have halted trading. The increase in trading and spike in prices has also bled over into other memed stocks like American Airlines, Koss, Tootsie Rolls, and Bed Bath & Beyond, among others.

As a result of these rapid swings, the popular retail trading app Robinhood has decided to lock down trading for those stocks. Customers that own them are only able to close their positions (i.e., sell). Robinhood has also raised margin requirements for certain securities as well, claiming that these moves help customers "navigate this uncertainty," protecting them from market volatility. If the Play Store app rating is anything to go by, Robinhood's customers don't want the help. A complaint aiming for a class-action suit has already been filed in New York regarding the action. 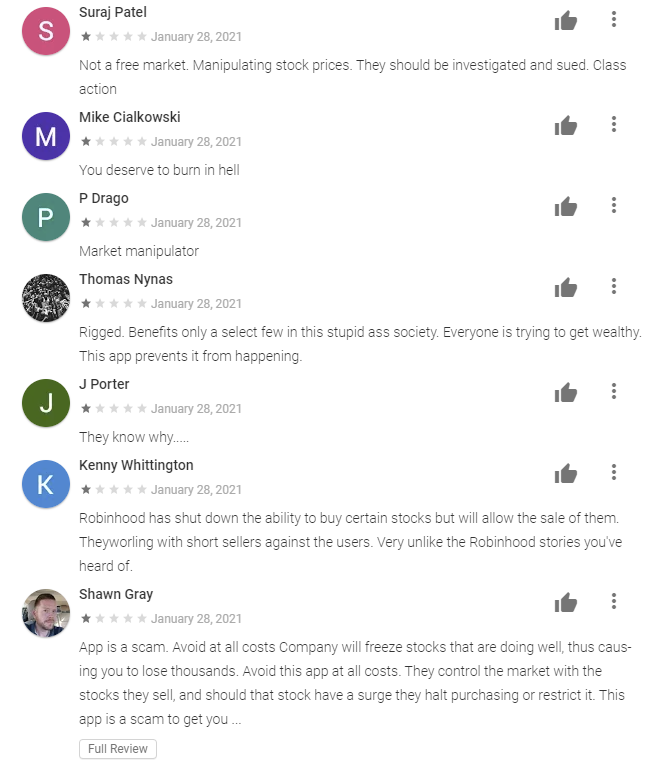 At the time of writing, Robinhood's app rating has hit 1.0 out of a possible 5 stars, the lowest possible rating one can achieve for an app on the Play Store. Nearly every single review published to the Play Store in the last day has been negative, with users effusive in their criticism for the company's actions. With Play Store app ratings weighted to use more recent review scores, the flood of low-scoring reviews has successfully tanked the app's rating.

Other apps like TD Ameritrade Mobile and E*TRADE have also been hit, though to lesser degrees.

One star, the lowest possible score.

Previously, Google itself has swooped in when an app is "review-bombed" in this manner. Earlier last year, a similar thing happened with the Zoom and Google Classroom apps, with students hoping negative reviews could get them out of remote coursework — an admirable effort. It likely won't be long until Google steps in to adjust the Play Store rating, but this is almost certainly only the beginning of the story for Robinhood. As expected, Google has started taking down recent negative reviews, bringing the app back up to a 4.2-star rating.

Over 100,000 reviews have been removed by Google, according to the number currently listed at the Play Store.

Robinhood has also opened trading again for GME. Though markets are closed until tomorrow morning, restrictions in the app have been removed, according to reports in the last few minutes.

GME and AMC are buyable again on Robinhood pic.twitter.com/SiwScvbgj7

Ratings back down to 1.1 stars

Despite Google purging negative reviews last week, Robinhood users remain disgruntled enough about the company's actions that they've managed to bring down the ratings to 1.1 stars again, at the time of writing. And it doesn't look like Google will swoop in to help this time around. A spokesperson confirmed as much to The Verge. The publication writes "that the current reviews — which were not the ones deleted in last week’s purge — are compliant to Google’s policies, and won’t be removed."

Your Instagram stories could soon be free of duplicated posts