Google's fourth quarter earnings are in, and you might almost be convinced that Covid had no effect on the company, looking at the numbers. Revenue is up 23% year over year, itself an increase compared to our now blissful memories of 2019.  Total income is also up almost 70% compared to Q4 2019, at $15.6 billion. The bulk of that growth came from Google's bread-and-butter: Search and YouTube.

While some of that revenue increase comes from very substantial bump in Google Cloud (which pulled $3.8 billion) and the nebulous "Other Bets" category (which saw $196 million), those categories are still operating at a loss, subsidized by Google's other successes. The vast majority of revenue and basically all profit came from Google's core services. Though Google didn't break out numbers further at that level, in a call with investors earlier today, the company explained that much of that is from YouTube and Search.

In between waxing over its own numbers in the most flattering way possible, Google's executives dropped a few curious factoids regarding its performance, like the fact that 70% of YouTube viewers say they've bought something based on a YouTube ad, and that YouTube reaches more 18 – 49-year-olds these days than TV does. Connected TVs are Google's fastest-growing screens, and that's thanks to YouTube as well. In short: YouTube's handling the pandemic pretty damn well, and that makes sense. With nowhere else to go, we're probably watching more than ever.

Thanks again to the pandemic, Google's operating expenses are also down slightly, reducing costs. But not everything is looking up. Google did point out that app growth is actually slowing compared to last quarter. Numbers are still up there, of course, but it sounds like we've all found enough games, meditation apps, and streaming exercise courses to tide us over until we're vaccinated.

Google also championed its Fitbit acquisition in the call, claiming again that it was "complete" in the face of regulatory disagreement from both the US and Australia. We'll see how that approach pans out, though Google's already threatened to pull out of the Australian market if the country's planned legislation regarding referral traffic fees happens. 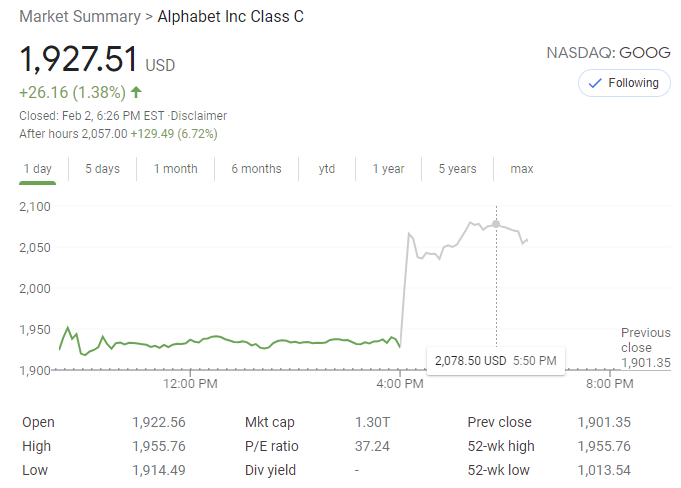 Google's general antitrust woes, of course, are ongoing, but any action here in the 'States has apparently been deferred until after 2023. In the meantime, and based on these performance metrics, Google's on track for continued growth, and investors agree. In after-hours trading, Google's stock is up somewhere around 7-8%.