Yesterday's Stadia news has some fearing for the future of the platform. While the company hasn't announced that it's killing Stadia itself, some wonder if this step away from first-party games could be the beginning of the end. But it's the licensing news that's the most important detail: Google is opening itself up to a pivot that could be an incredibly smart move. In the long run, Stadia's original business model may have been doomed to fail.

Game streaming is a new market, but it's one we all saw coming. It doesn't take Nostradamus to see streaming media, the rise of cloud computing, and in-network game streaming and connect the dots to combine it all into a subscription business. A decade ago, OnLive tried its hand at the idea, but the state of the internet wasn't quite there yet. Now, ten years later, we're ready for it.

It's a gold rush.

Even so, the game-streaming market is still in a very early form, and it's too soon to predict what sort of business model will ultimately prove viable. We have the technology to make it work well, but we need to work out the financial nitty-gritty in a way that rightsholders can agree to. Drawing an imperfect parallel to streaming media, I like to think of this as the "early Netflix" era, but with two twists. One, we all saw it coming — basically every company that invested in cloud computing has decided to try its hand at the same time. And two, we've all learned from the rise of streaming media to do things differently. 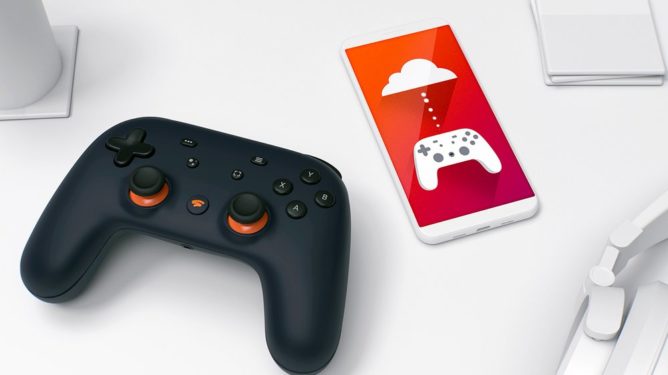 Although one might argue Stadia was a little earlier to hit the market, and that it's a more mature product than many of its competitors, that is a small advantage in a sea of competition. You've heard of Microsoft's Xbox Game Pass Ultimate, Nvidia's GeForce Now, Sony's PlayStation Now, and Amazon's Luna, but the space is teeming with smaller startups getting in on the action as well, like Shadow, Parsec, and Vortex. It's a gold rush. Even more importantly, game publishers like EA are also looking into the idea, running their own trials, and that is key.

What we've learned from Netflix

In the fourteen years since Netflix started streaming video, the market has changed drastically, and we're in the middle of one of the biggest upsets yet. The barrier to entry to start a streaming service is getting so low, almost every major rightsholder is planning one. Netflix very wisely invested heavily in its own content to offset that anticipated shift, ensuring it remains a destination even as it loses its content backlog to competing services. It's the most straightforward way to fight the issue: If everyone will lock down their own content to their own service, make your own as well. That way, at least you're on even footing. Unfortunately, it's a solution Google just abandoned.

The death of first-party games for Stadia doesn't mean Stadia will die.

The death of first-party games for Stadia doesn't mean Stadia will die. However, I do think it means Google's plans to keep Stadia as a consumer-facing service aren't so firm, and opening up licensing to third parties makes it clear bets are being hedged in a way that could keep Stadia around long-term — just maybe not in a form that current subscribers would recognize in ten years.

Looping back around, the streaming video market is starting to solidify around a model that ties major rightsholders and networks to separate services. (These are the à la carte TV channels so many of us hoped for, but not quite the way we hoped to get them.) I can't claim that the video game market is exactly the same as movies and TV, but on the precipice of edge computing, spinning up your own game-streaming service is about to get a lot easier. I think that same publisher-based consolidation is an unavoidable outcome in that sort of landscape, maximizing profit. Why would publishers let Google take a cut either with a subscription service or outright selling titles to stream when they can do it all directly and keep every cent? That means big centralized services like Stadia would lose their catalogs, spelling the end — a game-streaming service with no games.

Licensing changes all that, and even brings about the inevitable outcome sooner. Google's Stadia can serve as the back-end and distribution for not just big publishers hoping to start their own services, but it could even let independent developers open their titles up to game streaming without having to give publishers a cut. (There's more to what game publishers do than simply distribute a title, but it's a big part of it.) And it means that shift to a publisher- and studio-centric model can happen faster, dropping the barrier to market entry much more quickly.

White-label game streaming is an inevitability. PLEX is partnering with Parsec for its game-streaming platform, and Nvidia's been teaming up with plenty of other companies with GeForce Now — it's probably only a matter of time until it's available under a different name in some markets.

Google may have given Stadia its only potential route forward, but not in a way that's obvious or clear. The key thing to keep in mind is that Google's original model would never have worked if the market follows similar trends to other streaming media. As in the case of Netflix and streaming video, one obvious solution was to continue a heavy investment into first-party titles. For whatever reason, that didn't pan out. I think that was a mistake, and Google should have stuck it out to keep its options open, but the minds in charge of Stadia lacked the guts to stay in the very expensive and very difficult business of making video games. In light of that, this pivot to a licensing model was the only real answer.

Whether it's a CDN, B2B, or outright vendor, licensing is Google's path forward for Stadia.

James Sanders of 451 Research (part of S&P Global Market Intelligence) considers it a likely future. "It's easily possible to envision a landscape where larger publishers such as EA or Ubisoft could license technology from Google to build a direct-to-consumer cloud gaming service, without needing to invest billions by building their own technology and data centers for it."

Stadia isn't dead, but the market trends for streaming argue against success in its current form.

It's impossible to say with any certainty what the ultimate future of the licensing model will be. It might range from selling packaged hardware and software solutions for independent operation, to a total package with Google handling distribution and marketing, to a simple edge computing software suite that can be spun up as required. But whether Google is vendor, CDN, or a B2B, licensing has a future, and the previous model likely didn't.

We might look back in a decade and marvel at how quickly Google understood this inevitable shift in the streaming model, cementing its place as the back-end provider for dozens of publishers.

Stadia isn't dead, but the market trends for streaming argue against success in its current form. What Google's doing here is unarguably the best way forward for its business. And yes, we'll meme about how Google killed yet another service, and this is just another sign that developers can't trust Stadia as a platform, but that isn't quite true. Google found a way to save Stadia. It's just not what we expected.

Google Meet can now test your setup before joining calls