It's been a while since smartphones went beyond just being tools to become practically extensions of ourselves. And being so personal to so many users, it's no surprise that a lot of us want to customize the way our phone's interface looks. Unfortunately, stock Android doesn't offer system-wide theming options, but there's a chance this may change with the arrival of Android 12.

A new report claims that Google is working on a native theming system that would allow users to select one primary and one accent color that will then be reflected throughout the system, including the notifications and quick settings area as seen in the mockup below. 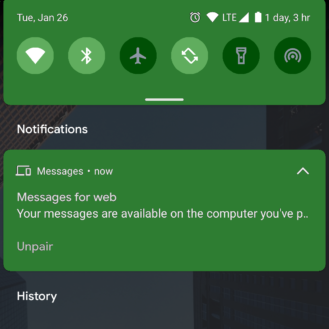 A mockup of the feature.

What makes this feature special is that third-party apps would also have access to the chosen colors, making it possible to have a uniform theme across both them and system elements. This is a step up from the current situation where apps developed for Android 10 and above only change their look based on whether light or dark mode is active.

The selection of colors would differ across brands and possibly even models, and from what it seems, there may not be a custom color picker that would let you choose one of your own.

We'll likely know more about the new theming system next month, which is when we expect the first Android 12 developer preview to be released.