The Play Store's automated app removal algorithms are supposed to make the distribution platform a safer place for everyone, but unfortunately, the process is prone to false positives. The latest victim to be struck by this is the Just (Video) Player for violating the profanity policy. The app included a note on the subtitle format .ass in its description, which Google's bots identified as a certain body part.

The Play Store sent out an automated email to the developer, telling him that his "app contains content that doesn't comply with the Sexual Content and Profanity policy" and has been suspended. The email points to what exactly is meant, saying an issue has been found in the description right here: "Subtitles: SRT, SSA, ASS, TTML, VTT." Based on that wording, it's safe to assume that ASS must have triggered some profanity filter. It's unclear why the filter hasn't triggered earlier, as the description isn't new. Funnily enough, Google's own ExoPlayer library mentions the same subtitle format both in its Github repo and its support page, so it appears that Google isn't opposed to using such profanity itself. 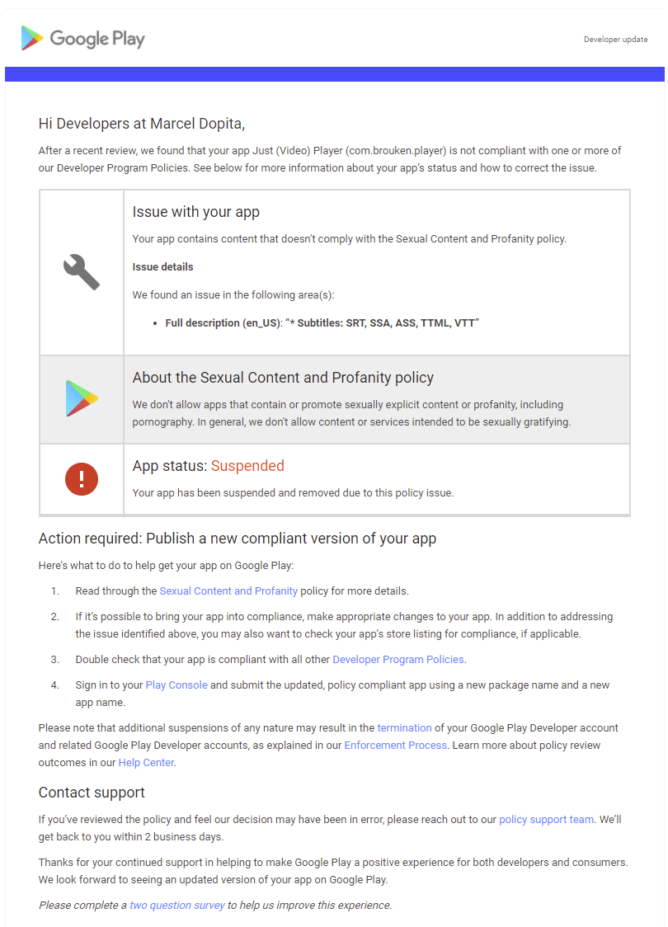 In contrast to other apps that have been left suspended for days, Google reacted much quicker for Just (Video) Player — it's already back online after the developer reached out to support, only a few hours after it vanished. It's still sad that one of the world's most valuable companies isn't able to properly review its automated takedowns and prevent situations like these altogether. At least it was possible to get a human to review the takedown faster than in previous cases.

But let's get real. Of all terms you can consider obscene, an ambiguous word like ass shouldn't be among the words that trigger a full automated app suspension. A request for developer comment or a manual review by developer support could've prevented the misunderstanding altogether.