Google introduced a new benchmark named Core Web Vitals for judging website speed last year. It has already had a role in search rankings since May 2020, so it's vital for developers to know how their websites are performing. They've been able to use the Web Vitals extension to judge speed and frame rates on the desktop for a while now, but starting with Chrome 90, Google wants to integrate these live stats right in the desktop and mobile versions of the browser. They're coming in the form of a new Performance HUD overlay. 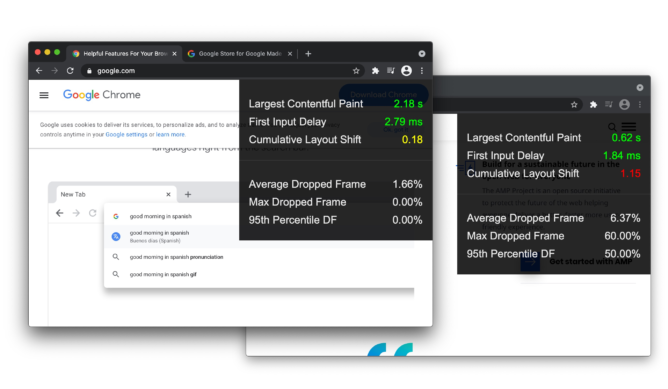 Google Engineering Manager Addy Osmani writes in his blog that the Performance HUD will become part of the Chrome DevTools, and you'll be able to toggle them on and off as needed. When enabled, they'll show developers both the Core Web Vitals as well as smoothness metrics. Since the native feature is also available on mobile browsers, the original limitations of the desktop-only browser extension are eliminated.

If you want to check out the HUD for yourself, install Chrome Canary (the most unstable version of the browser), go to chrome://flags, search for "Show performance metrics in HUD," and enable the entry. The metrics will be permanently shown after a reboot until you disable the flag for now.

Google making it easier for developers to judge website performance is good news for everyone — nobody likes slow and janky sites, and the new HUD is one of many tools that help devs identify and fix issues.