Apple has become a big name in wireless headphones with AirPods, which are easily the most popular and recognizable earbuds worldwide. AirPods provide reliable connectivity and an all-around great wireless earbud experience, but the sound quality can't compete with a nice set of over-ear headphones. That's what the AirPods Max are about.

Apple's recently released AirPods Max are its first over-ear headphones. They feature 20 hours of battery with active noise cancellation and transparency, Bluetooth 5.0, and an incredibly premium build. All for an MSRP of $549. These are probably some of the best headphones on the market, but the price and availability do put them out of reach for most people. And like most Apple products, the AirPods Max work best if you're using them inside the Apple hardware ecosystem.

From the styling to the materials, the AirPods Max are the classic premium Apple product. They are made from aluminum and stainless steel with a flexible aluminum headband and mesh canopy instead of padding. Apple sells them in 5 colors, gray, silver, green, blue, and pink. The headband is comfortable at first and helps manage the 384 grams of heft well, but it does become uncomfortable over time. The earcups are made from a weaved acoustic fabric which is comfortable but does get a little itchy with longer hair, too. The earcups are magnetically attached and can be swapped, but cost a whopping $69 for a pair. Hopefully there are some good third-party options later.

The right ear cup houses a rotating digital crown and a single button, which are the only controls on the headphones. The crown adjusts the volume, and you can press it to control music playback. The other button controls ANC mode, toggling between active noise canceling and transparency. I have found both controls more reliable than touch panels from most competitors, but they feel a little less futuristic. The headphone sensors can detect when you take them off to pause music, but this only works on Apple devices. 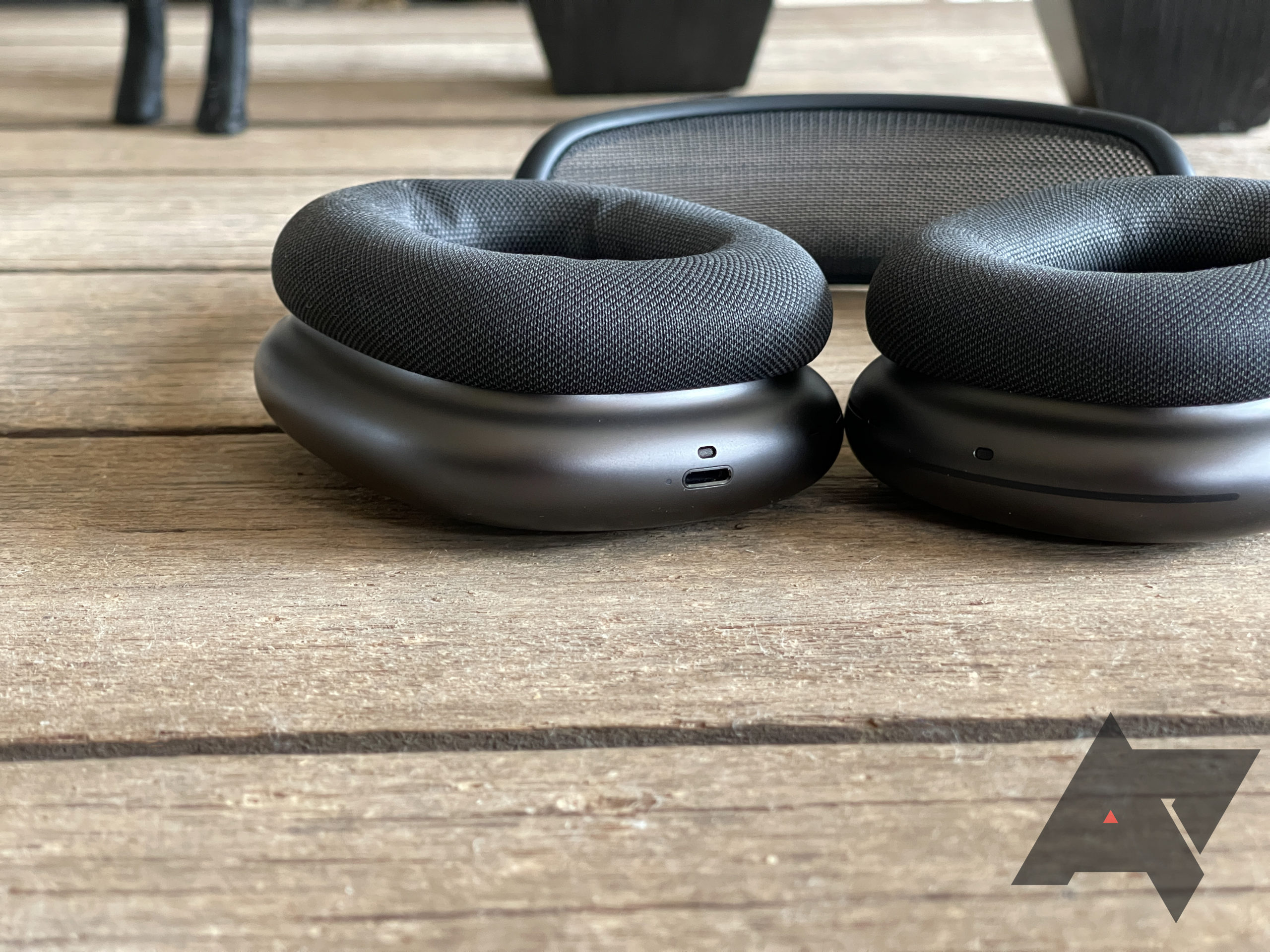 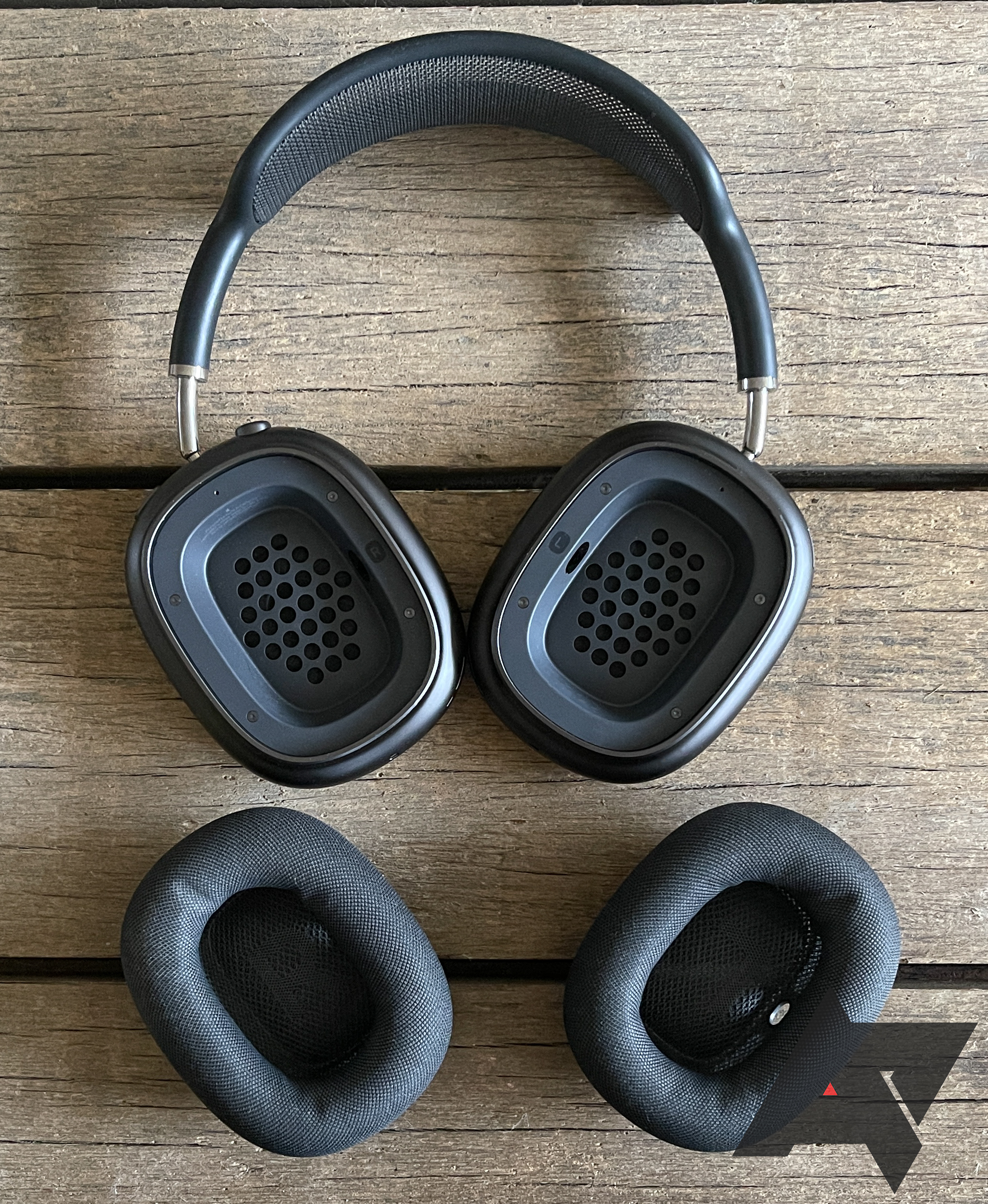 At the bottom of the right ear cup is the Lightning port and LED indicator light for pairing and charging status. The Lightning port is going to be nice for iPhone users, but Apple is moving away from Lighting on its Pro products, and $550 headphones would seem to fit in that category. I'm not necessarily saying Apple should have used USB C, but support for their new MagSafe charger would have been nice at least.

In the box, Apple provides the headphones, a USB-C to lightning cable, and the carrying case. The AirPods Max do not come with a 3.5mm audio adapter for wired audio, Apple will instead charge you $35 for one of the crappiest cables ever manufactured to fulfill this purpose. You'll need an Apple cable for this as well because older 3.5mm-to-Lighting cables won't have the newer DAC required for the AirPods Max. For $550, not including this dongle is absurd. 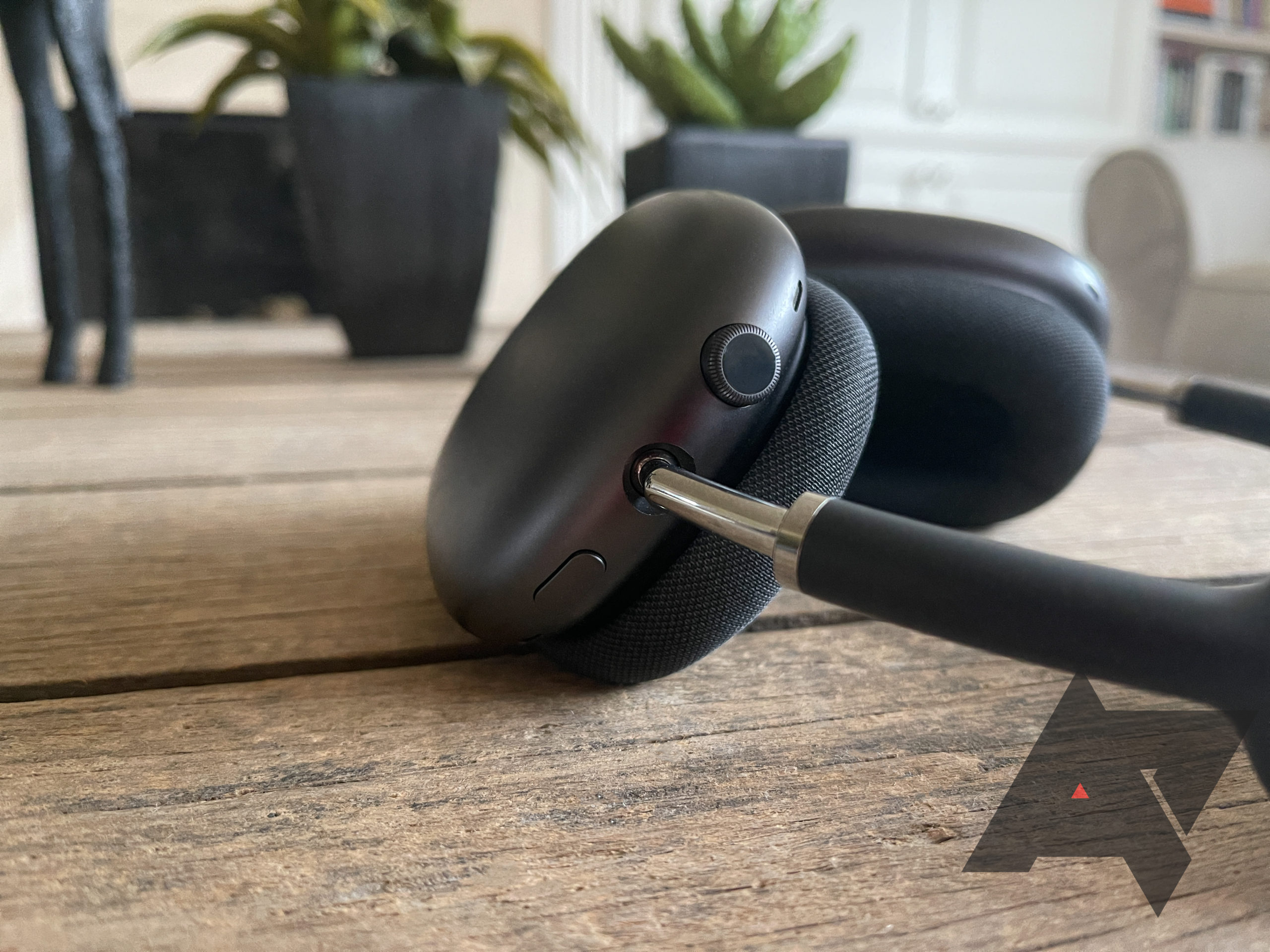 Apple has never been known for their top-tier audiophile sound, and AirPods Max don't change that. Don't get me wrong, the AirPods Max sound fantastic, but they won't have that perfect flat tuning audiophiles appreciate. Apple puts the audio through a lot of processing which does make things sound good, but won't be a completely accurate reproduction of the audio. To me, music sounds more alive and movies are more immersive than many other audio devices. It's more noticeable on an iPhone compared to an Android phone, but Dolby Atmos support can help on the Android side, provided your phone supports it.

These headphones have active noise canceling, and it's really good, blocking out almost all ambient noise and most voices. I'd say it's about on-par with the noise cancellation of Sony's WH-1000XM4 headphones, or even better in some situations. When you're not using ANC, you can enable transparency, which uses the included microphones to bring in audio. This is, to put it simply, incredible. The audio passthrough is so good you can have a full conversation with it on. The quality of the audio coming through the headphones is as good as real life.

You can easily take a phone or Zoom call with these with no issues. There is a little popping and overall glitchiness that I'd chalk up to the usual Android Bluetooth problems, but it's tolerable. Unfortunately, that mic won't help you talk to Assistant—the AirPods Max only work with Siri.

AirPods Max support only one audio codec: AAC. This is an older audio codec, but it's what Apple has chosen to use on all of its audio devices. Predictably, Apple doesn't support low latency codecs that tend to work better on Android like Qualcomm's aptX or Sony's LDAC. So you will probably experience some audio delay and sync issues on non-Apple devices. Calls and music will both be fine on the AirPods Max, though. On an iPhone, iPad, or Mac, latency isn't much of an issue because of Apple's usual Apple-to-Apple magic. Android devices also miss out on Apple's spatial audio surround sound effect.

Battery life on AirPods Max is nothing extraordinary. Apple advertises about 20 hours of usage across the board with both ANC and transparency. In my usage, I would say I get closer to about 15 hours with the AirPods Max. There is no actual power button so the headphones will automatically go into low power and ultra low power mode, which can slowly drain the battery. The Smart Case that's included does force it into low power mode, but that's a half-assed alternative to a button. 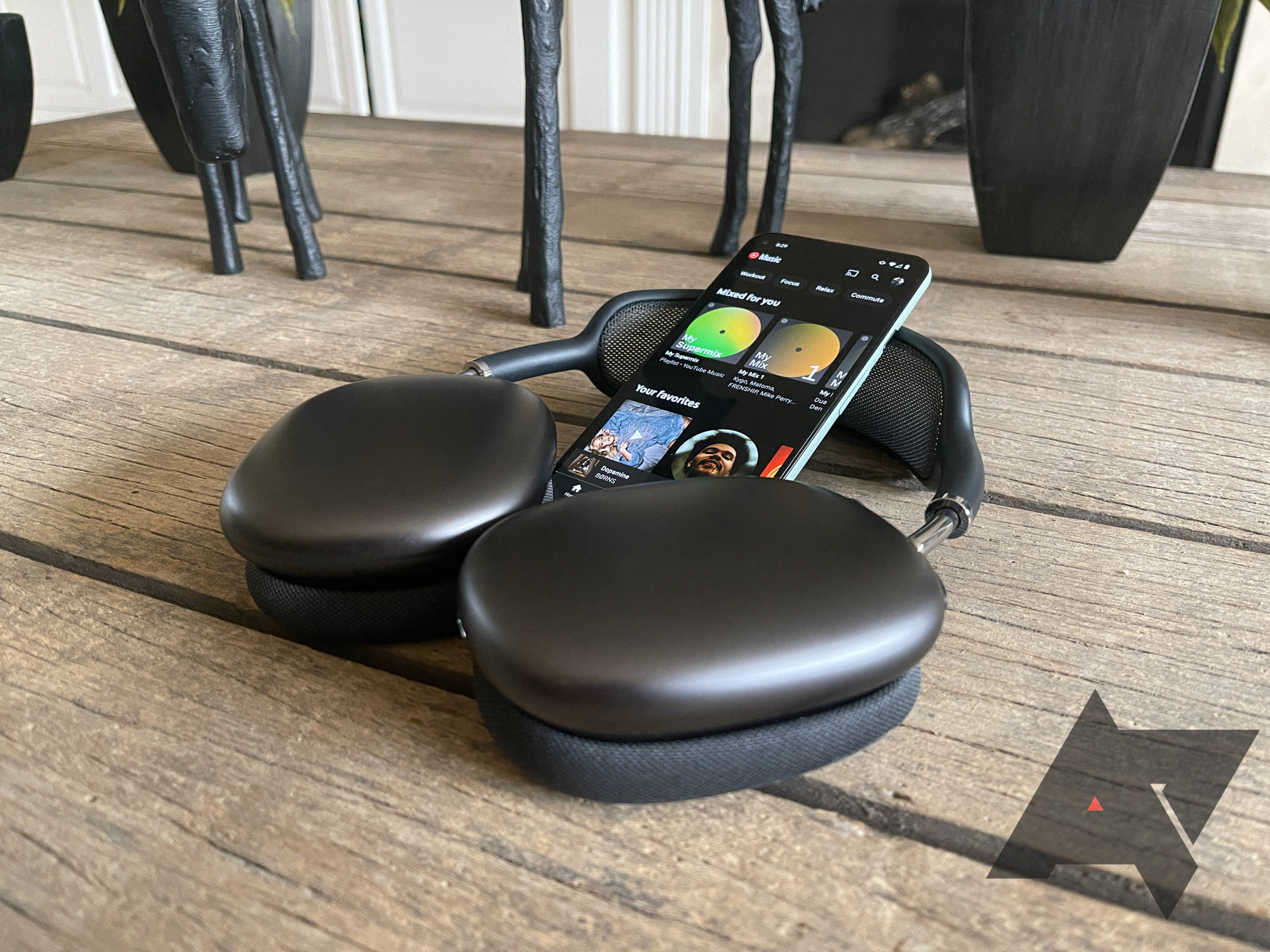 Apple AirPods Max
8/10
Probably not if you're reading AP. AirPods Max are not designed for Android users, so you miss some cool stuff. I'm platform agnostic and use both iOS and Android daily, and the headphones work better on my Apple stuff. For Android users, missing out on multi-device connection, seamless switching, spatial audio, "Hey Siri" support, and automatic pausing when you take off the headphones is a bummer—these features make the Airpods Max a great experience on iOS. If you have an Android phone, you shouldn't get AirPods Max unless you really want AirPods Max just to have AirPods Max.

AirPods Max probably aren't going to be the best option for headphones for most people, regardless of platform. They sound good and there are plenty of useful features for Apple users. It's definitely worth shopping around for different headphones like the Sony WH-1000XM4 or Sennheiser HD 450BT, both of which are better values for non-Apple folks. Even Apple users will have to think hard about dropping $550 on a pair of headphones when there are excellent devices like the XM4 that cost hundreds less.