You could argue that Motorola made budget phones worth buying when it launched the original Moto G in 2013. That device was a marvel at the time—for under $200, you could get a smartphone that didn't suck. Suddenly, everyone was making $200-300 phones that also mostly didn't suck. Today, the mid-range space is much more crowded, and Moto has sometimes failed to make a splash with the annual Moto G revamp. This year there are three new G-series phones, including the Moto G Power. Arguably, this is the device with the widest appeal. There's no stylus included, but it's got more muscle than the G Play, and it has a big honkin' battery.

This device clocks in at a slightly lower price than last year's G Power; it starts at $199.99 with 3GB of RAM and 32GB of storage.  It's recognizable as a Moto G with its competent plastic housing and clean version of Android. However, Motorola seems to have cut some corners to keep the price down. The new G Power has less RAM and storage than last year's phone, and while the display is a bit larger, the resolution dropped from 1080p to 720p. Despite having fewer pixels to render, the G Power still feels more sluggish than it should. Motorola is also launching this phone with Android 10, and it only guarantees one major OS update. The 2021 G Power isn't a throw-away, but it's not particularly good, either.

The G Power is a plastic phone, but it's less ugly than last year's G phones, which had glossy plastic shells that became smeared with fingerprints the instant you picked them up. The G Power is not imitating glass like the Samsung Galaxy S20 FE or S21, though. While the G Power doesn't look as classy as those phones, the plastic feels reassuringly durable. Matte plastics can be on the soft side, but there's not enough give to make the phone feel flimsy. I don't feel like I need to baby this phone to keep it one piece, and that's a relief after toting around glass slabs most of the time. 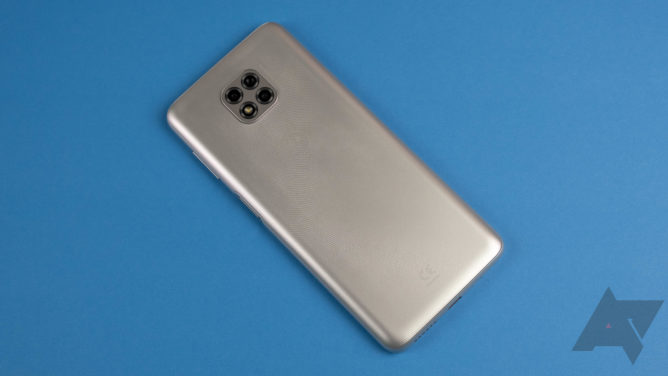 The Moto G Power is a big phone not only because it has a sizeable 6.6-inch display, but also because the bezels around that screen are none too small. As is common with LCD displays, there's a "chin" at the bottom of the phone, but props to Motorola for restraining the urge to slap its logo on it. The bezels on the sides and top are smaller—I'm not particularly a fan of the mildly asymmetric look, but that's a minor issue. Another consequence of the LCD is the subtle shadow at the top of the panel around the hole-punch. All LCDs with notches or holes have this minor visual defect, but it's still annoying.

The LCD itself is passable, but not much more. It gets bright enough for outdoor use but only just. The resolution is a problem, too. At 6.6 inches and 720p, the Moto G Power has a much lower pixel density than most phones I've used in recent memory; that includes last year's G Power, which had a 1080p LCD. For comparison: the 2020 G Power had 399 pixels per inch, and new G Power has a mere 266ppi. Everything looks a bit fuzzy, and I'd wager this difference is visible for anyone with average or above-average eyesight. This is an IPS panel, so at least the viewing angles are solid. But hey, if all you want is a big screen, the G Power certainly has that. 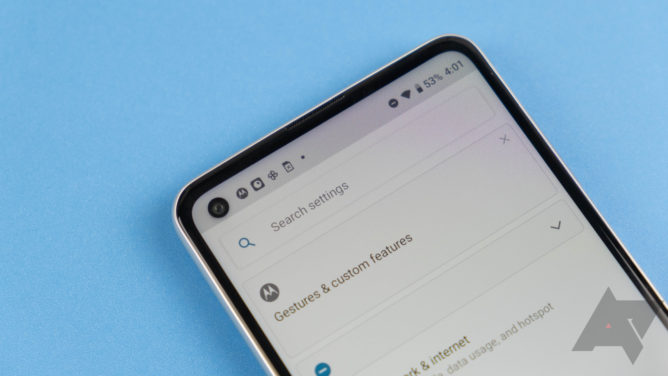 Note the shadows around the hole-punch and edges of the screen.

Motorola has relocated its fingerprint sensor again, this time to the right edge of the phone in the power button. There's a depression in the frame around the button to make it easier to find by feel, and the sensor is very accurate. It's not very fast to unlock the phone, though. One point in favor of the side sensor: Moto has some software tie-ins with the side-mounted sensor that it borrowed from last year's Edge phones, but I'll get to that later. With no biometric hardware, the Motorola batwing logo on the back is just a logo—it doesn't even have a divot to help stabilize the phone in your hand. That's a bummer, but the subtle pattern of lines on the back does look nice for a cheap phone.

Motorola's budget phones don't usually come with much in the way of accessories. All you get here is a 10W power adapter and a 3-foot USB-A to C cable.

The G Power ships with Android 10, and that's one of the most notable strikes against it. Android 10 is a fine piece of software, but it's more than a year old at this point. Since this is a budget Moto phone, the company promises just one major OS update, which will bring the G Power up to Android 11 (launched fall 2020). We don't know when this will happen, but it's possible Android 12 could be on the horizon by the time this phone is on Android 11.

Motorola's take on Android is good, even if the software is too old. You don't have to deal with redundant apps, ad-infused bloatware, or buggy UI layers.  There are several gesture-based features to turn on the flashlight or open the camera, and these are still fantastic even if Motorola can't decide what the name them (it changes almost every year). Plus you get Googley features like Call Screen and Live Caption. New this year is a feature called Power Touch, which borrows some elements from Edge Touch on the Edge and Edge+. You can double-tap (not press) the power button at any time to bring up a configurable list of app shortcuts, which can be quite useful and is much easier to trigger than Edge Touch on Moto's more expensive phones. Peek Display is still around (AKA Moto Display), but you can't wake it via the proximity sensor.

This device runs on a Snapdragon 662, which is a perfectly capable ARM chip from a hardware perspective. However, performance on the G Power has been lackluster. It doesn't hang or freeze up, but everything takes a beat too long. I feel like I'm always waiting for the phone to catch up to me, which hasn't been my experience with most G-series devices. Animations don't look great, either. The Moto G Power consistently drops frames in every animation, falling far below 60 fps, which makes everything look choppy. The 3GB of RAM in the base model is also a bit on the anemic side, so don't expect any large apps to hang out in the background. Simple games can run well enough on this device, but the graphics often take a substantial step down compared to more powerful phones. If you're big into Fortnite or another demanding game, this is not the phone for you. I hope Motorola can improve system optimization in a future update, but that's never going to make intense 3D games run well. 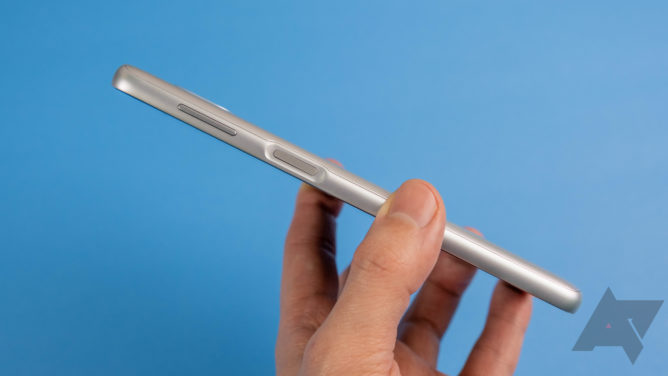 It's not a very slim phone, but there's a lot of battery in there.

So, the performance might be underwhelming, but the battery life is at the opposite end of the spectrum. The G Power has a 5000mAh battery, and it lasts ages on a charge. Motorola claims three days, which seems entirely doable from my testing. Even if you use this phone aggressively, two days is in the cards. With lighter usage, you might only have to charge the G Power twice a week. This is probably the only advantage to that 720p screen, which won't use as much power as full HD.

The Moto G Power has a squircle-shaped camera module on the back with four evenly spaced things. You might think these are all camera modules, but one is a cleverly disguised flash. Another is a 2MP depth sensor that doesn't do anything but augment portrait mode (which is still mediocre). Then you've also got a throw-away 2MP macro camera. Like every similar camera I've used, this produced dark, blurry images and is generally not worth using. There's no ultrawide, no action cam, and no optical zoom. So, that leaves us with one camera that matters: the 48MP primary. 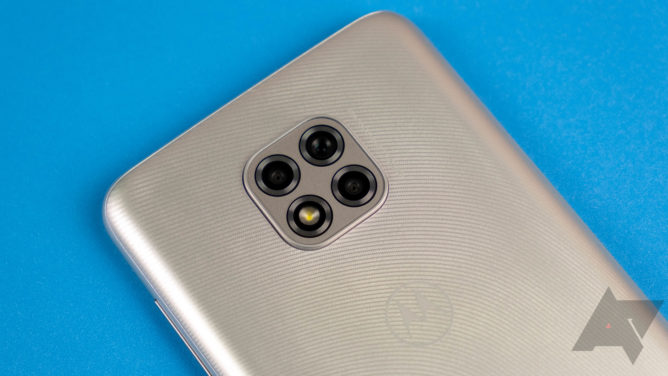 The good news is that the primary camera is competent. The Samsung S5KGM1 sensor bins images down to 12MP, combining four of its 0.8um pixels into larger pixels. This is supposed to improve light collection. The camera still doesn't perform to flagship levels in low light, but it's good enough for the price. Outside, the G Power pulls in a lot of detail, and shutter speeds remain high enough to capture a squirmy dog or kid. The photo processing also doesn't obliterate fine details or oversharpen like some past Moto devices. I'm less pleased with the colors you get from the Moto G Power camera. Many images I've taken look washed out, and those taken in dim lighting also end up with inconsistent white balance. This is, however, the sort of thing I'd expect from a $200 phone in 2021.

Only if you really care about battery life. The Moto G series is at its best when Motorola pushes the envelope, but that's not the case with the 2021 Moto G Power. It's a real step down from the 2020 G Power. Both the performance and display quality are worse than I'd expect for the money, and two of the phone's three cameras are borderline useless. I really want OEMs to stop doing this.

The battery life is phenomenal, but that can't entirely make up for the phone's shortcomings. The software might have been a reason to buy the G Power, but it's running Android 10 and the only guaranteed update will bring the phone up to Android 11, which it should have launched with in the first place. If I were spending $200 on a phone, I'd probably look at Nokia devices before the new G Power. 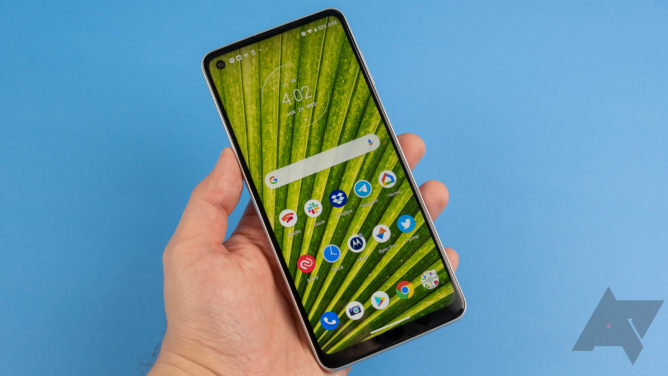