Asking for the Wi-Fi password always feels a little awkward, but Google has been working on ways to make the process easier. Android 10 allowed users to share network details via QR codes, and now it looks like Nearby Share could simplify things even further in an upcoming version of Android — possibly even this year's Android 12 release.

According to a new commit submitted to the Android Open Source Project by Google engineer Abel Tesfaye, the current Wi-Fi sharing page may add a new button in the future that will enable users to exchange Wi-Fi credentials via Google's Nearby Share, the Airdrop-like feature introduced last year in beta. 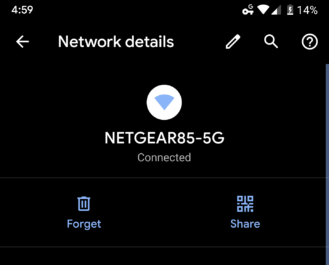 The current Wi-Fi page on Android 10+ allows you to share details via QR code.

Though this method of exchanging Wi-Fi login details would still require guests to be in the immediate vicinity of their hosts, it eliminates the need to pull up a physical QR code and do the awkward dance of trying to get one device to capture the other device's screen correctly. Small quality-of-life improvements like this come are well appreciated and help make an OS feel polished and thoughtfully considered.

This commit hasn't yet been merged, so there's no telling exactly how soon the feature could appear in an Android release. The first developer preview of Android 12 is rapidly approaching, but I wouldn't be surprised to see this Wi-Fi sharing upgrade make it into the final public release later this year. We know that Nearby Share might be utilized for sharing apps soon, so why not Wi-Fi?

Good Lock 2021 arrives earlier than expected, with a colorful new design and One UI 3 support ...