Let's be honest: searching for a decent screen recorder for your Chromebook sucks. Most "free" screen capture software found online requires you to pay an expensive subscription to unlock essential features, like unlimited and high-resolution video recordings. Although a video capture card will give you full control, like the ability to record using your Chromebook's native resolution, not everyone wants to invest in a costly desktop computer. The developers at Google seem to have realized that people don't want to pay a subscription to get decent screen recordings, so they finally decided to add a native solution to Chrome OS.

As spotted recently in the Canary channel, Google is reworking the screen capture experience on Chrome OS to make it more discoverable, intuitive, and powerful to use, all while including a brand new screen recorder that supports your Chromebook's native resolution. If you're itching to try out this improved feature, you can copy and paste chrome://flags/#screen-capture into the URL bar and enable it from the drop-down menu. Now, if you click on the "Screen capture" button on the shelf quick settings or press the Ctrl, Shift, and Overview keys, you'll see a new floating bar at the bottom of your Chromebook's screen.

At a glance, the capture bar has a slick Google Material theme aesthetic that uses a layout reminiscent of the screenshot tool on macOS Mojave. The bar offers a toggle to switch between still captures and screen recordings. Plus, you can change the captured area's size to full, partial, or window. Here's how all of these options work.

A full screenshot takes a fullscreen capture of your screen (no surprise). Chrome OS will highlight the entire screen in blue to show it'll save everything in view. Just hit the enter key and the full screenshot will be saved to your download folder.

A partial screenshot takes a snapshot of a specific part of your screen, and the new system is a lot more intuitive to use than the existing experience. For instance, you can choose to move or resize the capture area by dragging it around or expanding and reducing it from the various anchor points. Chrome OS will display a tooltip with the capture area's pixel size, helping you determine how large your screenshot will be. The floating bar does cover up some of the screen, which is annoying, but I imagine Google will fix this later in development.

Need to take a quick screenshot of an app? The window screenshot tool will save one active window without including everything else in the background. Chrome OS will highlight your chosen window in blue to show you what it'll capture.

The screen recorder is the highlight feature of this new screen capture experience. You can record a video of a full or partial area of the screen or an active window. A recording icon will show up next to the system tray to indicate your screen is recording. Clicking on the recording icon on the shelf will finish the recording and save the clip to your device. Unfortunately, the screen recorder isn't working right now, so we don't know the full details (like video quality, bitrate, and file type) yet.

Why the improved screen capture is significant

Recording the screen natively on Chrome OS will be significant for students, especially with distance learning. I'm always recording my online class lectures to reference my professor's notes and catch any critical announcements I might've missed. Most students struggling financially (like myself) don't want to invest in a subscription to remove a "free" screen recorder's limitations. I'm fortunate to own an Elgato HD 60 Pro capture card, which is terrific for recording class lectures, but I can't use it while I'm on the go. With the improved screen capture, students can intuitively capture their screen and fully control their footage.

The improved screen capture also solves another significant gripe with tablet mode on Chrome OS. My Pixel Slate is limited to full screenshots in tablet mode, meaning I have to manually crop and resize my captures before importing them to my notebook app. Going through those steps is tedious and annoying, especially when I'm trying to get work done. With the improved capture mode, I can quickly access the screen recorder and capture tools from the shelf quick settings while in tablet mode. It saves me from wasting time connecting my keyboard accessory to my tablet to take a partial screenshot of my textbook.

The improved screen capture is in its infancy and has a long way to go before it's ready for the Chrome OS Stable channel. Aside from the broken screen recorder, there are a few things that could be better. The floating bar covers a portion of the screen, making it difficult to see the content behind it. I wish there was an option to lock the partial capture area to a fixed aspect ratio like 16:9 or 4:3 since it'll allow me to take consistently sized images and videos. I also think Google should add in a microphone toggle in capture mode. Overlaying voice over a screen recording would be an incredible tool for professors who want to elaborate on theories and concepts beyond writing notes.


I'm personally very excited to move away from my capture card and ditch the awful online screen recorders. Despite its current shortcomings, the improved screen capture will finally offer native screen recording and a pleasant screenshot experience that are both intuitive, convenient, and easy to use.

Google has steadily updated the upcoming screen capture experience on Chrome OS since we covered it last month. In a recent Canary channel update, Google added the necessary code required for the native screen recorder to function. Here's a quick look.

Taking a video of my desktop using the native screen recorder.

As we can see, Chrome OS will now record my screen and capture audio using my laptop's microphone. It will save the screen-recording as a .webm file, which uses a variable framerate averaging around 30 frames per second with a 48 kHz audio sample rate. The screen recorder function is still a work-in-progress as window capture mode doesn't record video yet, but it's a good start. I'm hoping Google will eventually switch the output file to a more compatible format like mp4.

There are minor usability tweaks to the screen capture experience since I reviewed it a month ago. The buttons are more legible than before, and I especially like the new countdown timer that starts right before Chrome OS records my screen. Overall, the upcoming capture mode is a lot more polished than before, and I can't wait to start using it when the feature is ready for prime time.

A ton of polish went into the native screen capture for Chrome OS since we last covered it a couple of months ago. With window capturing now functional and cool animations to the capture bar, the feature is inching closer to wide availability on the Stable channel. In a recent Chrome OS Canary update, Google added a new feature that toggles microphone audio during screen recording. 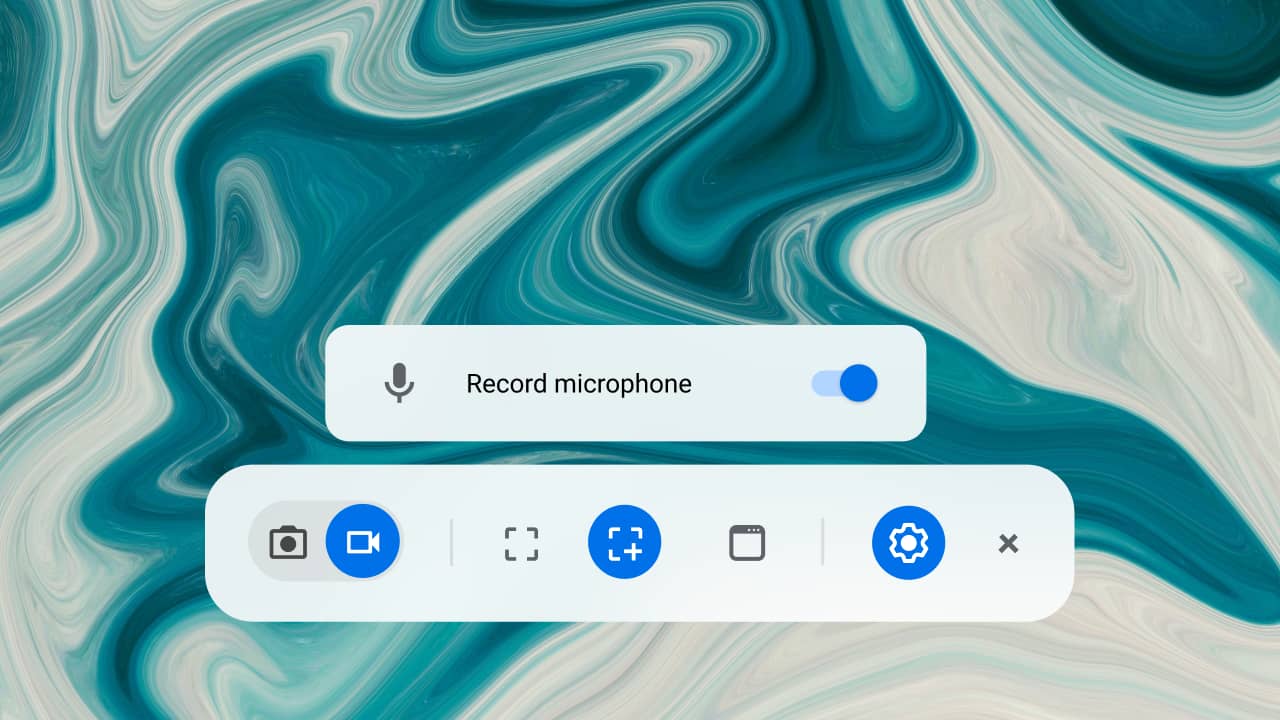 A new "Record microphone" toggle in the capture bar.

If you want to use your Chromebook's microphone to do a voiceover, toggling it is very straightforward. Press Ctrl-Overview keys, click the "Settings" icon on the right side of the bar, then select the "Record microphone" switch before recording your screen.

In a commit discovered by Robby Payne from ChromeUnboxed, Google may plan to add additional capture settings into the bar:

We're not sure what additional settings you'll be able to configure with the screen capturing tool, but I'm hoping the developers will add an option to show mouse clicks. Displaying a visual indicator after a click is essential for recording tutorials since it helps viewers follow precisely what I'm doing. Apart from a couple of issues, most notably its reliance on .webm output, the new native screen capture tool feels polished and nearly ready for wide use, and I can't wait to integrate it into my school workflow when it launches.