Not too long ago, Qualcomm announced its latest flagship processor, the Snapdragon 888. Today, the company is back with another new mobile platform, the Snapdragon 870. While the name implies that we're looking at a brand-new line, the new chip is actually nothing but a slightly tweaked Snapdragon 865 Plus.

If you've ever read about the 865 and the 865 Plus, the 870 should be instantly familiar. It has the same Kyro 585 CPU with a slightly higher clock speed (up to 3.2GHz vs. 3.1GHz), the Adreno 650 GPU, the Spectra 480 image signal processor, and the X55 global 5G modem. That also means it's still using the 7nm process instead of the 5nm found in the Snapdragon 888. Like the Snapdragon 865 Plus, it also supports Wi-Fi 6 and Bluetooth 5.2, making it a future-proof platform for the next few years to come. 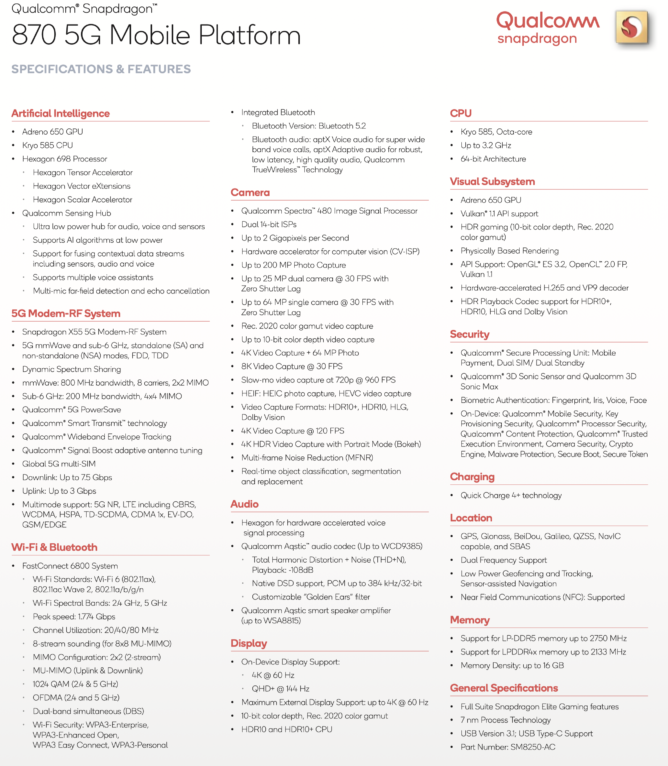 The new 870 might be a response to more and more manufacturers opting for 7xx series chips in the upper mid-range market. The difference in performance between the 7xx and the 8xx series is getting more and more pronounced, so it makes sense to introduce a new, cheaper 8xx chip based on existing manufacturing lines to bridge the gap.

I wouldn't be surprised if we see a few phone lines upgrading from the 7xx series to the 875 this year, and Qualcomm vice president Kedar Kondap teases that the "Snapdragon 870 will power a selection of flagship devices from key customers including Motorola, iQOO, OnePlus, OPPO, and Xiaomi." These manufacturers are likely the first to come forward with new Snapdragon 870-powered phones. Qualcomm says we can expect the first few handsets in Q1 2021.