Wallace & Gromit: The Big Fix Up is an upcoming augmented reality game for mobile, and it's slated for release in the UK in the fall of 2020 and will be released worldwide at a later date. Since this is a fresh announcement, only a few details have been shared, and so far, we know the game will be animated through CG, and that fans will get to join the duo in their latest business venture as an employee of the Spick & Spanners. Ideally, the game will provide a home-based experience (as in this AR game can easily be played at home), and will support the majority of modern smartphones.

The trailer above is rather short, but it neatly sets up the premise that Wallace & Gromit have started a new business called the Spick & Spanners. Of course, it will be your job to help the duo clean up the town of Bristol, and so the game will unfold through many different avenues, such as multi-user AR gameplay, new CG animations, in character phone calls, comic strips, and Extended Reality (XR) portals, which sounds interesting enough, though hardly describes the actual gameplay loop.

As far as a release date is concerned, all we know is that the game should arrive in the UK in the fall of 2020, which means the worldwide release still does not have a date attached, though it's planned. We also don't know how the game will be monetized, but with Aardman attached to the title, I would hope the studio keeps the monetization to a minimum, instead of cashing in on the franchise like most branded releases on the Play Store.

If you'd like to check out the official website for Wallace & Gromit: The Big Fix Up, you can find it here, but just like the PR that was sent out today, there's hardly any information provided. Luckily you can sign up for email updates on the official site if you're eager to learn more about Wallace & Gromit: The Big Fix Up whenever new details are released.

For the first time ever, Wallace and Gromit will bring fans directly into their adventures via The Big Fix Up: a first of its kind, story-driven experience that promises to bring together these globally iconic characters and state-of-the-art technology.

Wallace & Gromit: The Big Fix Up is a new, augmented Wallace & Gromit story, which will bring Wallace & Gromit alive in an entirely new way, while creating a cutting-edge new platform for storytelling. Rendered in CG using the latest technology, fans will be able to interact in a host of new ways and get closer than ever to the iconic duo. The experience will be rich and multi-layered, realised through innovation and technology.

Later this year, join Wallace and his faithful hound as their latest business venture, Spick & Spanners, takes on the contract of a lifetime: to ‘Fix Up’ Bristol. Fans will be invited to download a free app and play along at home, as an employee, and for the first time ever, be able to step directly into the world of Wallace & Gromit.

The story will play out in a variety of different types of media, to tell the beats of a story: multi-user AR gameplay, new CG animations, in character phone calls, comic strips, Extended Reality (XR) portals and more. All brought together in a mobile app, used as a ‘window’ into their world.

The new Wallace & Gromit story is an entirely home-based experience, meaning it is accessible to all with a recent smartphone*. The Big Fix Up is set in the city of Bristol, the home of Aardman, but people from all across the UK will be able to take part in the full end-to-end adventure, which will see Wallace, Gromit, and an exciting cast of new characters appear in their very own homes! Following its initial UK launch in the Autumn, Fictioneers plan to roll out The Big Fix Up globally.

In addition, thanks to 3D mapping platform, Fantasmo, Fictioneers will bring together an unprecedented city-scale augmented reality experience, which will see Bristol city centre come to life at home.

Chosen by UKRI as part of its Audience of the Future program, which is a key part of the Government’s Creative Industries Sector Deal, announced in March 2018, Fictioneers was awarded a multimillion-pound R&D grant to explore and pioneer cutting-edge immersive experiences. And now, working hand-in-hand with Aardman, will bring a brand-new Wallace & Gromit augmented adventure to fans.

Susan Cummings, Co-Founder of Fictioneers and Managing Director of Tiny Rebel Games, said: “We’re thrilled to be working with our friends at Aardman to deliver the first augmented Wallace & Gromit story. We, at Fictioneers, are on a mission to innovate storytelling with our groundbreaking methodology. It is a rare privilege to be able to do so with some of the most beloved animated characters in the world and to give fans the first opportunity to join in Wallace & Gromit's story.”

Aardman’s Merlin Crossingham, Creative Director of Wallace & Gromit comments: “Aardman is a multi-faceted creative studio and is just as happy with classic film making as it is with new and emerging technologies. Wallace and Gromit’s heart and soul is in stop motion, but they have often dabbled in the cutting-edge of tech, and this is one of those occasions. We are delighted to join forces with the amazing folk at Fictioneers to take Wallace and Gromit on a new adventure in such a groundbreaking way.”

With a heavy focus on R&D, Fictioneers has sought out the most cutting-edge AR technologies and partners to realise its ambitions. This includes working with Unity Technologies, which powers more than 60 percent of the world's AR and VR content, with its new MARS product and AR Foundation toolkit, giving creators the power to build mixed reality (MR) and augmented reality (AR) applications that interact with any real-world environment. The Unity team’s technology and support have enabled Fictioneers to bring contraptions and environments to life and give them intelligent, dynamic behavior.

Jamie Innes, Product Lead at Fictioneers will be sharing the latest project details as part of Unity Technologies’ keynote at Augmented World Expo on 27th May at 4:20 UK BST. Find out more here: https://www.awexr.com/usa-2020/agenda/1817-unlocking-the-next-generation-of-intelligent-ar-ex.

Visit www.thebigfixup.co.uk to register your interest.

Wallace & Gromit: Big Fix Up is now available on the Play Store

Above is the actual trailer currently listed on the Google Play Store for Wallace & Gromit: Big Fix Up. While it does show some of the game in action, there's no sound, which in my eyes immediately calls the game into question when lazy content like this is the first thing everyone will see on the Play Store.

The last we heard about Wallace & Gromit: Big Fix Up was back in May of last year, and after testing the game today, it's easy to see why we haven't heard anything about this title in the previous eight months. At its core, The Big Fix Up is an idle game, and it's not even a good one.

You see, the entire premise of this release is built around Wallace and Gromit starting a new business, where the duo has won a contract to clean the entirety of Bristol. You'll start out by sending some contraption to do your dirty work, and since you start with a single bot, you can only take one job at a time. The thing is, these jobs consist of wait timers, and that's it. You take a job, and then you wait. Sadly after the first job, I was met with an 8-minute wait, and I'm sure it gets worse from there.

What's odd about this setup is that Fictioneers (the developer) keeps hammering home that this is an augmented reality game, but the actual AR content is simply tacked on in a separate section that doesn't really incentivize utilizing its functionality. Sure, you can decorate your surroundings in this mode with the virtual content you unlock through playing the game, but like many AR releases, this mode feels shallow and ultimately pointless.

Then there's the fact you can't play the game unless you sign in with your Google account, or the fact nothing is explained to the player, leaving you to guess what it is you're supposed to be doing beyond what's stipulated in a couple of brief dialogs. From what I can tell, the entire point of the game is to wait for jobs to autocomplete so you earn loot boxes that unlock the content you can use to build more contraptions to take on more jobs at once. It's a never-ending loop.

All in all, Wallace & Gromit: Big Fix Up feels like a rushed effort, especially with those ludicrous wait times to complete your jobs. Even as an idle game, this title fails, and that's saying something since idle games are one of the laziest genres out there, up there with bubble poppers and match-3 titles.

As a longtime fan of Wallace & Gromit, I feel disappointed. This game isn't any fun, and frankly, I don't see the point of the wait timers when the title isn't a cash grab. Of course, everything a developer would need to turn the game into a cash grab is already here, including loot boxes, so it's easy to see where this game could be headed, though I have been reassured by the developer the game will remain free to play with only a few in-app purchases for AR pack content, which is good to hear. I've also been told that new content will be released starting on the 25th, when the story of this title is supposed to kick off, so hopefully a reason to play the game materializes on that date. 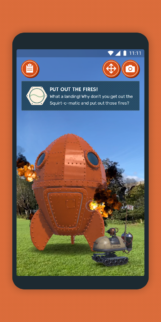 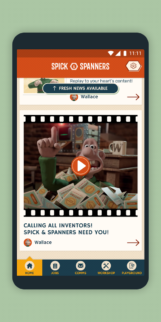 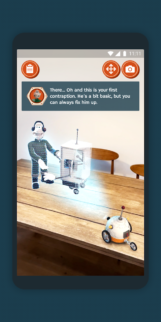 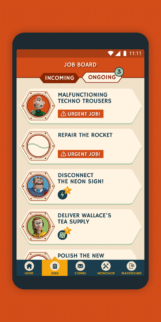 Of course, if you'd like to take a look for yourself, you can grab the free install for Wallace & Gromit: Big Fix Up from the Play Store widget below. 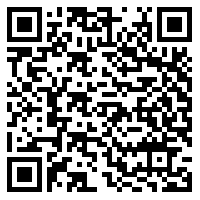