Samsung hasn't only announced the S21 series and the Galaxy Buds Pro at Unpacked today, it also took the time to introduce the Galaxy SmartTag. It's a concept that should feel familiar if you've ever heard of Tile. Like the products from the hugely successful competitor, the Galaxy SmartTag will help you find misplaced items via Bluetooth Low Energy. It also has a button that lets you activate a pre-defined smart home routine. It's controlled via the new SmartThings Find service.

The SmartTag can be attached to mostly anything that has the bad habit of disappearing: keys, wallets, phones, and other objects. You could also attach a tag to your pet's collar, but since it doesn't support GPS, this won't do much to help you find your cat or dog when it runs further away. Samsung writes that the tags have a range of 120m or 400ft, though that can be cut short immensely by walls and other obstacles.

If you're in a neighborhood with a lot of Samsung devices, not all might be lost: starting next year, you'll be able to profit from the Galaxy Find Network that just went global after a long testing period in Korea, the UK, and the US. Basically, the tags will connect with random Galaxy devices around town that share your tag's latest location with you. Samsung promises that everyone's privacy remains protected. Right now, the service is already live for Galaxy devices you might lose, like phones, earbuds, and watches. The feature is opt-in only, and can be accessed and activated in the SmartThings app.

The SmartTags also have a button for controlling smart home devices. You could use the tag on your keys to turn off the lights when you leave home, for example. There's also a separated long-press option, giving you a bit of versatility. Being a Samsung product, they only work with compatible devices in the SmartThings app. 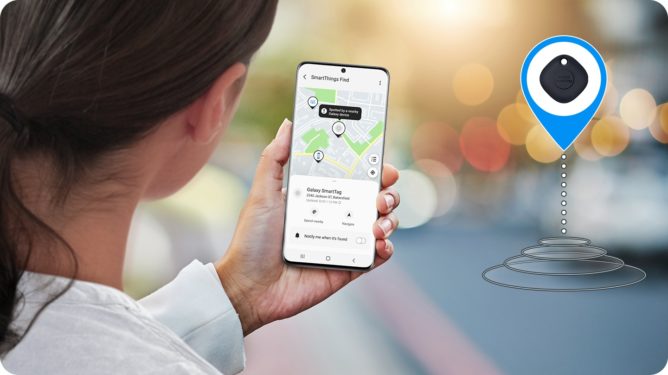 In contrast to Tile, which is supported by Google Assistant, the Galaxy SmartTag only fully works with Galaxy smartphones and tablets running Android 8 and higher. This seems to apply specifically to the Galaxy Find Network, but it's possible that more features are limited.

A version with Ultra Wideband (UWB) called Tag+ will be launched later. UWB measures distances between devices more accurately than Bluetooth, so you can expect that it'll be even easier to find misplaced keys, wallets, pets, and so on.

The regular Galaxy SmartTags will launch on January 29 starting at $29.99, but there will be deals for those who buy in bulk or pre-order a Galaxy S21 unit. The tags are available in black and "oatmeal" white.

Google wants to turn YouTube into a shopping site