Facebook has a long history of privacy lapses, including some more serious ones, and the mere fact that it owns some of the most widely used social media apps already concerns privacy-conscious users. While WhatsApp was still able to keep a fair distance from Facebook’s unreliable privacy practices, that fringe benefit is soon going away, as the messaging app has decided to enforce new usage terms that give its parent company more control over your WhatsApp data.

An in-app notification sent over the past week gives nearly all WhatsApp users until February 8 to accept some new clauses introduced in the app’s terms of service and privacy policy. For the moment you can dismiss the pop-up without accepting anything — but it won’t stay like that for long. This notice is essentially an ultimatum requiring you to accept the new terms, or else be prepared to lose access to your WhatsApp account — there’s no middle ground. 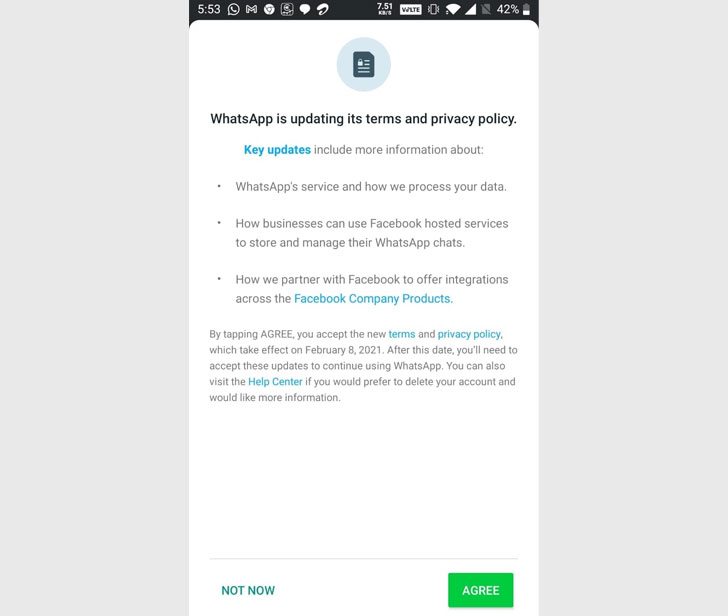 (via: The Hacker News)

Many of us would mindlessly agree to this regular-looking policy update, but diving a little deeper into the text tells you how Facebook’s plan to use your WhatsApp data comes into play here. Hitting that "accept" button will give the IM app your irrevocable nod to share any information that it holds on you with Facebook and its various subsidiaries.

This possibly comes as a part of Facebook’s recent efforts to tightly integrate all its messaging services — Messenger, Instagram DM, and WhatsApp — under one umbrella. In a similar policy change back in 2016 (about two years after being acquired by Facebook), WhatsApp gave its users a one-time option to opt-out of such overt data sharing with its parent company, but unfortunately, you don’t have that option this time around.

The data points that all Facebook companies can access may include your account details, any metadata associated with your chats, your financial transactions (over WhatsApp Pay), and even some information that the app automatically collects, like your log reports, device and network details, and your location (approximate, even if you haven’t consented location sharing). It’s worth pointing out that your WhatsApp chats and calls are still end-to-end encrypted, so neither Facebook nor WhatsApp can directly access your messages. However, all the associated metadata is nothing short of a digital treasure, which Facebook can use to target its services and ads better. Having said that, these policy changes apply everywhere except the EU, where WhatsApp has to work according to robust GDPR guidelines.

While these are the primary concerns, the new policy also notes that the service will have no ads for now, indicating that this stance could change in the future. Plus, WhatsApp clarifies that any information you share with business accounts on its platform could be shared by that outfit with other third parties, which may be governed by their respective privacy policies.

Given the widespread outrage, there’s a (very) slight chance that WhatsApp may repeal these changes or at least give the affected users an option to opt out of this forced data sharing agreement without losing access to all their existing chats and groups. However, I won’t put my money on it. If the company decides to go ahead as planned, you should at least go through the revised terms before making the call on staying with WhatsApp or switching to independent alternatives like Telegram and Signal.

WhatsApp’s recent policy change has stirred a much-needed conversation over data privacy even among those who aren’t as technically inclined, leading to people moving to other platforms en masse. This naturally troubled WhatsApp, which is now trying to do some damage control by clearing the air over some rumors.

We want to address some rumors and be 100% clear we continue to protect your private messages with end-to-end encryption. pic.twitter.com/6qDnzQ98MP

Using a nicely laid-out infographic (above), it clarifies that neither WhatsApp nor Facebook can read your private messages, while the accompanying text lists out the things it does not share with its parent company. However, it deliberately doesn’t talk about the information and metadata it in fact collects and shares with Facebook because that would’ve turned into a much longer list.

WhatsApp additionally notes how it plans to offer Facebook’s hosting services to WhatsApp Business accounts and integrate Facebook Shops in the chat app. Your interaction with these Shops will indeed be used to personalize ads across Facebook and Instagram.