Android tablets have a tough time competing at the high end; iPads more or less single-handedly dominate that space. But if you're looking to spend a couple hundred bucks on something to watch Netflix in bed, you're probably not shopping Apple. You're probably looking for something like Samsung's latest budget tablet, the Galaxy Tab A7: it's cheap, it's got a nice screen and speakers, and the battery lasts for days. There's not a lot to dislike here. 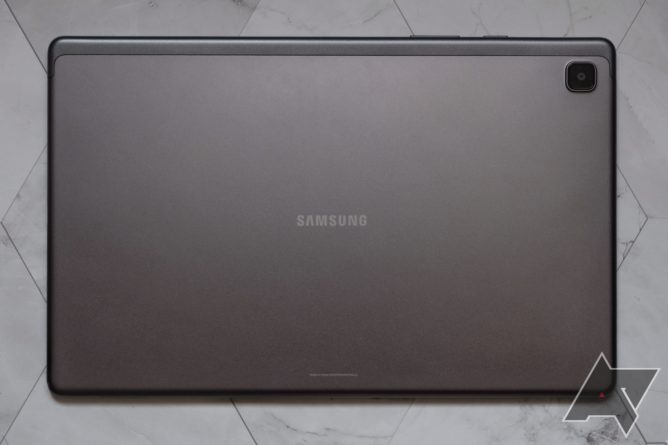 The Tab A7 is unassuming in the extreme. It's got a 10.4-inch screen with reasonably-sized bezels and an eight-megapixel front camera that's centered when the tablet is held landscape. It's very pedestrian, lacking Samsung's modern tablet design cues like flat edges and rounded camera modules. Still, it'd be a stretch to call it ugly — with the possible exception of the silver model, which has matching white bezels around the screen (hello, 2015). The gray and gold versions have black bezels. The A7's body is aluminum, which isn't entirely expected in this price range. I wouldn't have been surprised to see plastic here.

The 10.4-inch screen is a TFT LCD panel, but it's very pleasing to look at. It's 1200p, and the colors really pop. It's missing the perfect blacks an OLED would offer, and it doesn't sport a high refresh rate (at this price, that'd be a lot to ask), but it's still perfectly nice for web browsing and media consumption.

Also lending to the media experience: surprisingly capable stereo speakers. Bass isn't great, and sound can get a little harsh when you crank it past about 75 percent, but below that, audio is clear and bright. And there are actually four speakers, one at each corner, so audio can maintain a stereo image regardless of the tablet's orientation. There's a headphone jack, too, if you'd prefer more personal listening. 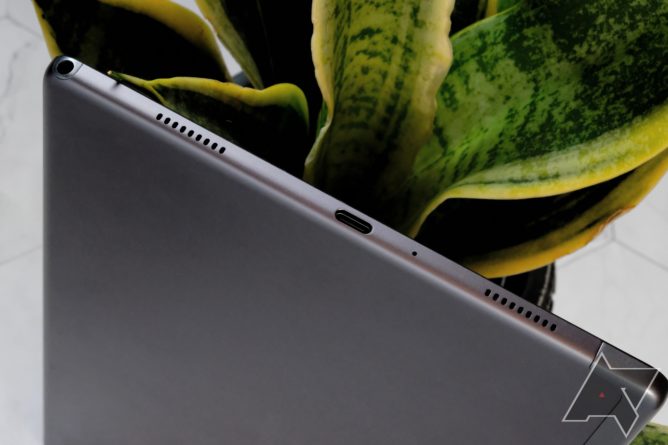 My biggest beef with the hardware is that the oleophobic coating Samsung applied to the A7's screen, if there is any, is terrible. Even with clean hands, it gets smudged immediately. Yes, screen protectors are available and don't cost much, but you shouldn't have to buy an accessory to solve a problem most tablets don't have.

In the box, you get the tablet itself, the normal documentation, and a cheapo 7.5-watt wall charger — although the A7 supports up to 15 watts from compatible Quick Charge 2.0 chargers. 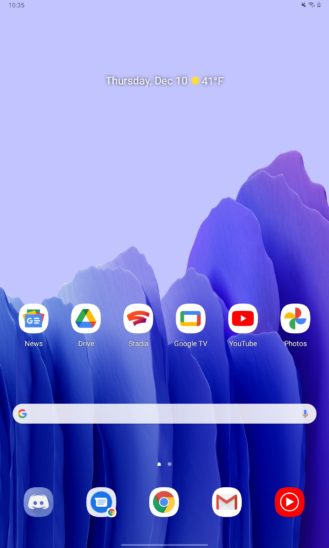 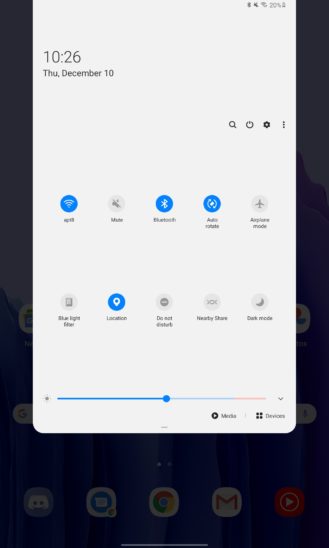 If you've used a Samsung phone in the past few years, you're pretty well prepared for the Tab A7. It's running One UI over Android 10 (Samsung couldn't tell me when or even whether to expect an update to Android 11, so I wouldn't hold my breath there), and Samsung's signature tweaks like Edge panel app shortcuts and app windowing make all the more sense on a larger screen. I don't think 10.4 inches is quite large enough to do desktop-style productivity work (certainly not with a measly three gigs of RAM), but it's nice to be able to float media controls or a chat window over your social media feed or whatever.

You've probably heard that Android's tablet apps aren't very good, and that's more or less as true as ever. Compared to iPadOS, there just aren't as many Android apps that are adapted for large displays. Some, like Gmail and YouTube, do make use of the extra space to show additional information, but plenty are content to clumsily blow up the standard mobile experience to fill the screen. That sucks, but it's not an indictment of the Tab A7 in particular, and considering you'll probably be spending most of your time with this device watching video or reading, it's not a particularly big deal here. 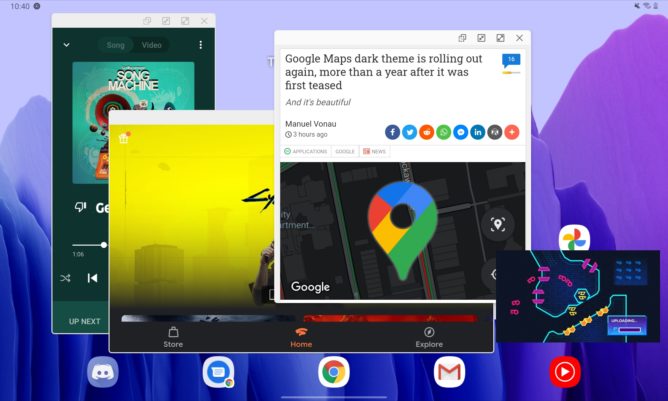 I don't recommend using the A7 this way, but you technically can.

To my surprise, the A7's low-rent specs didn't bottleneck the way I used the tablet to any appreciable extent. I wouldn't want to try to do my job on it, but that's not why anyone buys a tablet like this. Web browsing, video playback, and even some light gaming — I tested a few less-demanding games like Mario Kart Tour and Dead Cells — all work just fine. Quickly switching between apps isn't a great experience, but the A7 is definitely capable of handling one or two tasks at a time without any trouble.

And it can handle those tasks all day thanks to its 7,040 milliamp-hour battery. Over a few days of mixed use — reading, videos, music, and gaming — I squeezed just over 10 hours of screen time out of the A7. You'd have to really, really try to kill this thing in a single day. 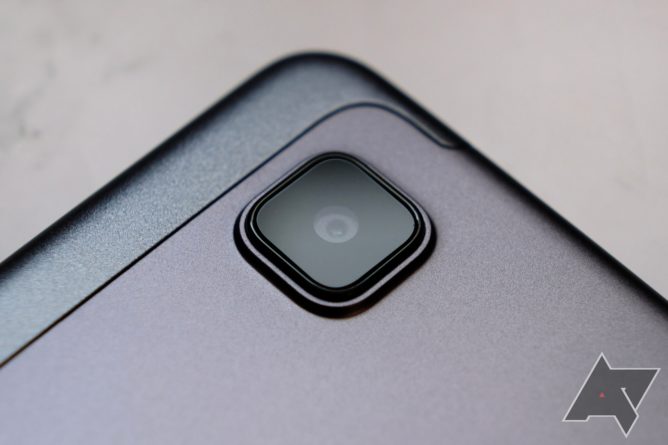 This is a budget tablet. Its cameras are bad.

There's a five-megapixel shooter on the back and an eight-megapixel on the front, and photos from both are just really not good. They're almost universally grainy and washed out. Personally, that doesn't bother me at all, but if you're liable to use your tablet for a lot of video calls or to take quick pictures of your kids or pets between social media browsing sessions, it might be worth it to you to spend more on something with better imaging. Yes, if all you'd use your tablet for is casual media consumption or web browsing. The Tab A7 is perfectly capable of both, and it's priced right at $230 (and frequently discounted, to boot). It's got really strong battery life, too, and build quality is better than you'd expect in this price segment.

The big Android tablet problem is present, of course: most apps just aren't great on a screen this large. But that hardly matters if all you'll be doing is reading the news, watching YouTube, and playing solitaire. For a casual user, the Tab A7 is a solid option, and a great alternative to Amazon's higher-end Fire tablets. 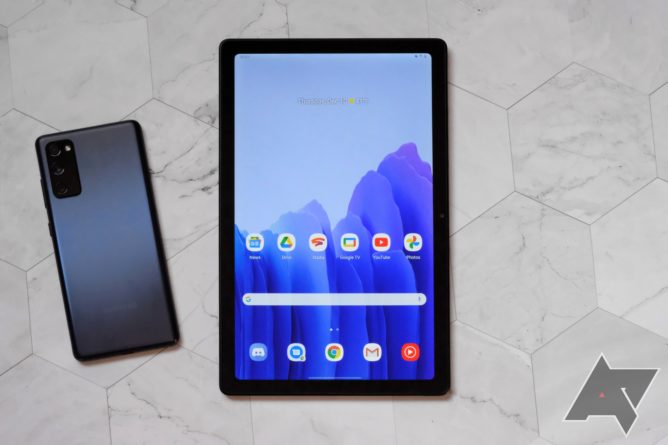 In the month since our review of the Galaxy Tab A7 was published, I've continued using it regularly, and I still like it a lot.

The fingerprinty screen is still the biggest thorn in my side; something made explicitly to be touched shouldn't collect oil so easily. But if it bothers you, it's a good enough tablet that shelling out a little extra for a screen protector that'll mitigate the issue is worth it. There are plenty of low-cost options available.

Unsurprisingly, my main use for the tablet has been media — it's not the type of device you'd try to do much else on. But its nice display and marathon battery life really do make it a good fit for that. I've been playing a ton of Cyberpunk 2077 on it through Stadia while the living room TV is otherwise occupied, and the A7 doesn't have any trouble keeping up with the stream. Its 10.4-inch screen is also a very comfortable size for reading without feeling unwieldy the way something like a 12.9-inch iPad can.

If you've been on the fence about grabbing a Galaxy Tab A7, just pull the trigger — it's a really good budget tablet. Just be sure to pick up a screen protector with it.