Samsung has announced its top-tier integrated mobile chipset for 2021, the 5nm Exynos 2100. As has been the case for the past several years, the silicon is expected to appear in next-generation Galaxy flagship devices in certain regions where the Snapdragon 888 from Qualcomm won't be seen.

Historically, the job has been to match or come close to Qualcomm's spec lines except in the few places where Samsung can apply its own priorities — whereas the former chipmaker needs to keep its appeal wide to OEMs and, thus, somewhat exhaustive, the latter's biggest customer is itself.

We get a clearer idea of its major components: three clusters of Arm cores with the powerhouse unit being a single Cortex-X1, a triplet of Cortex-A78 for support, and a quartet of A55 cores for first-gear operations. There's a Mali-G78 GPU which is said to outdo its predecessor in peak performance by 40% and three cores dedicated to neural processing to achieve up to 26 trillion operations per second — the same watermark touted with the Snapdragon 888. 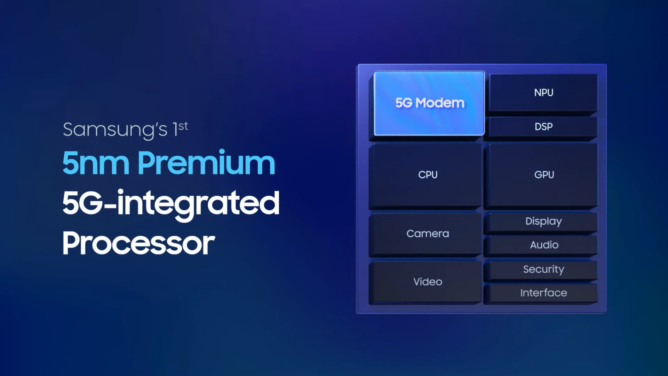 Samsung was also able to integrate its modem into the application processor to save on stack space — lockstep with the 888, though just behind Qualcomm on the whole as it was able to integrate a 5G modem into its mid-range Snapdragon 765G. It supports 2G, 3G, LTE, and 5G with top speeds of 3Gbps on LTE, 5.1Gbps on 5G in sub-6GHz networks, and 7.35Gbps with millimeter wave.

The image signal processor is capable of handling a single camera with resolution of up to 200MP, simultaneous dual-camera processing at 32MP per sensor, and up to six (smaller, of course) sensors in total. With a ton of total processing capacity comes the ability to do complex tasks like compositing several sensor feeds, recognize and define objects instantly, and exploring elaborate mixed reality programs. Early looks into the Galaxy S21's camera software show heavy use of multi-camera feeds.

To cap power consumption, the company has strengthened its task scheduler and is applying a new advanced multi-IP governor system (forced into the acronym of AMIGO) that monitors and throttles multiple processor instruction queues. Samsung has also stepped up its Knox security suite with an embedded secure element.

There will undoubtedly be more to come as the inquisitive acquire Exynos and Snapdragon versions of the S21 to compare and contrast, but for the moment while we lack a complete spec sheet for the Exynos 2100, there don't seem to be any glaring gaps between the two.