The Snapdragon 888 from Qualcomm is the SoC we'll be seeing in a lot of Android flagships in 2021, and Xiaomi's already announced a phone powered by it — the Xiaomi Mi 11. The company's budget sub-brand Redmi is due to launch a model with the same chip next month, and it looks like it will be among the cheapest Snapdragon-888 powered phones to come out in 2021.

Redmi’s General Manager, Lu Weibing, took to Weibo to announce key details about the upcoming Redmi K40. The phone will be unveiled in China next month, with prices starting at CNY 2,999 (~$463). It may seem a bit early to say this, but the K40 will likely be among the most affordable phones with the new flagship processor — we know how the integrated 5G modem in the Snapdragon 865 pushed up smartphone prices last year, so this could be about as cheap as we'll see any Snapdragon 888 handset.

The teaser for the device doesn't reveal too much else except that it will feature a 4,000mAh battery and that it will have the "most expensive" flat display — at least that's what Google Translate tells me. 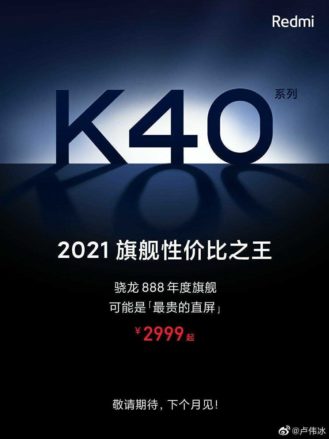 The teaser that was posted on Weibo.

If the Redmi K20 and the Redmi K30 are anything to go by, the phone won't be a full-fledged flagship — Xiaomi will have to cut corners to be able to offer the phone at such a competitive price. While there's no word on international availability just yet, the phone may make its way to markets such as India and Europe in the ensuing months.

Stadia is coming to LG TVs this year