OnePlus has slowly but surely moved into the upper tier of the price spectrum with its phones. But the saturated high-end market led the company to take another look at the budget segment last year with its entry-level Nord phones and its recent venture into the cheap TWE space. Now, OnePlus is entering the burgeoning fitness tracker market with its own cheap option.

The OnePlus Band is a capsule-shaped fitness tracker that is IP68/5 ATM rated and has a 1.1” AMOLED screen on the front allowing for all kinds of touch gestures to navigate the interface. In addition to heart rate, the band can also track your SpO2 levels and supports 13 activity modes (including yoga and cricket). OnePlus says that the tracker can last for up to 14 days between charges. It sticks to the old-school charging mechanism requiring you to pluck out the capsule instead of the more convenient solution adopted by Xiaomi's Mi Band 5. 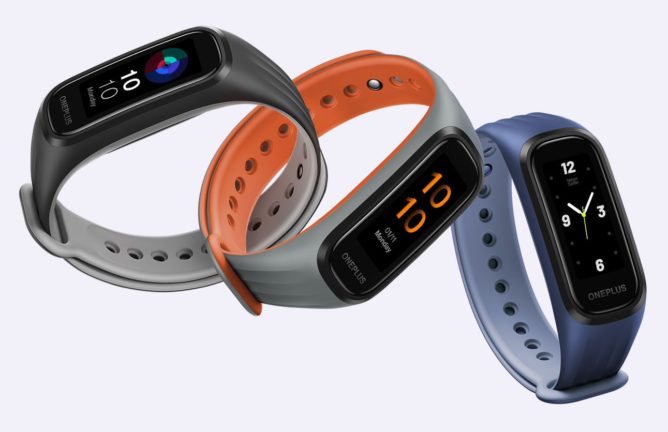 If this smart band looks familiar to you, that's because it's basically a rebadged version of the Oppo Band, which launched in June and hasn’t since made it outside China. Even the companion OnePlus Health app turned out to be just a relabeled version of the Oppo HeyTap Health app we checked out last week. That’s not necessarily a bad thing, especially since the app allows even those without a OnePlus phone to use the Band. On top of that, the company is working on an iOS alternative as well.

It will go on sale for everyone from January 13 via the OnePlus online store, Amazon, Flipkart, and other offline stores in India for ₹2,499 (~$34). You can pick up additional straps in Tangerine Gray and Navy colors for ₹399 (~$6) each. OnePlus is holding an early sale for Red Cable Club members on its site tomorrow. The company currently has no plans to bring the Band to other markets, though the long-rumored smartwatch may see a wider release.